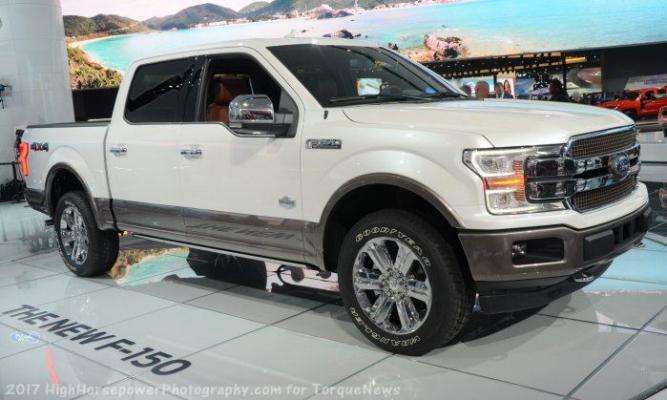 We have known since the 2018 Ford F150 was introduced that it would feature an engine lineup with more power than the 2017 models and today, we learned just how much more power the newest F150 will offer when it reaches dealerships later this year.
Advertisement

When Ford Motor Company introduced the refreshed 2018 F150 at the 2017 Detroit Auto Show, the company didn’t offer full details on the drivetrain, but they promised a new entry level engine, the first ever diesel option and more power for some of the other engines. Today, Ford offered up the first numbers for the 2018 F150 engine lineup, giving us a look at the horsepower and torque figures for the 2.7L EcoBoost, the 5.0L v8 and the new 3.3L base V6.

New 2018 F150 Base Engine
The entry level engine for the 2018 Ford F150 is a new, naturally aspired 3.3L V6, which delivers 290 horsepower and 265lb-ft of torque. This new V6, featuring both port injection and direct injection, delivers 8 more horsepower and 12 more lb-ft of torque, but it should also be more fuel efficient. It appears as though this base engine will be mated to the 6-speed automatic transmission as standard equipment.

Beefed Up Current Engines
The 2018 Ford F150 will share two engines with the current models, but for the new model year, those engines will be beefed up to offer more power, more capabilities and probably better fuel economy.

The 2.7L EcoBoost V6 climbs from 375lb-ft of torque to 400lb-ft through the introduction of port injection, while the horsepower output stays at 325. This engine, which was the most fuel efficient gasoline engine in the half-ton truck segment for 2017 will likely be even more fuel-friendly for 2018 while also packing more power.

The 5.0L V8 in the 2017 F150 features port injection, but for 2018, that powerful V8 also has direction injection as well as spray-in bore linings from the new Shelby GT350R Mustang. The new injection system allows the 2018 F150 V8 to deliver 395 horsepower and 400lb-ft of torque, up 10hp and 13lb-ft of torque compared to the 2017 engine. Like the 2.7L EcoBoost, this engine will be paired with the new 10-speed automatic transmission.

No information has been offered up on the new 3.0L diesel, but we can expect that it will offer more power than the Ram 1500 EcoDiesel while also getting better fuel economy – presumably with help from the new 10-speed automatic transmission. We can expect more details on the new F150 diesel when we get closer to the debut of that option, which is expected to be later in the model year.

The 3.5L EcoBoost will continue to serve as the premium engine option for the 2018 Ford F150 and since there has been no word of power increases, we can guess that output will remain at 375 horsepower and 470lb-ft of torque. Ford did state that the 2018 Expedition with the 3.5L EcoBoost will offer 375hp and 470lb-ft of torque, so it seems likely that the F150 version of that engine will pack similar power.

Finally, all of the engines for the 2018 Ford F150 will have standard Start/Stop technology, thus further improving fuel economy measures.