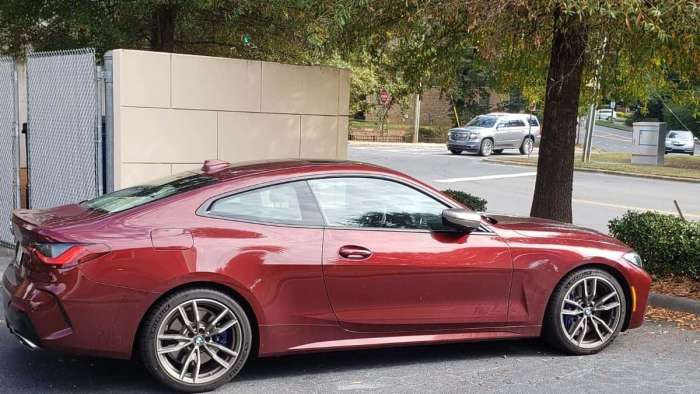 In the new edition of BMW's 4 Series, the Coupe not only looks different, it has also received a lot in terms of driving technology that distinguishes it from the 3 Series. Torque News test drove the 2022 BMW M440i Coupe and in this review will focus on its design, mild-hybrid technology allowing great mileage for a sports car, and driving qualities.
Advertisement

The all-new G22 4 Series coupe was introduced in MY2021 as a replacement for the F32 4 Series that had been around since 2014. Produced in Germany, the 4 Series sporty coupe comes in three trims: M4 Coupe, M4 Competition Coupe and M4 Competition xDrive Coupe. The M Performance version has the renowned BMW TwinPower Turbo 3.0-liter 6-cylinder petrol engine capable of delivering up to 387 hp of power and 500 Nm of torque and is mated to an 8-speed Sport Automatic transmission. The 24-valve engine is equipped with eBoost 48V mild hybrid technology with variable valve control and high precision direct injection.

M440i Coupe's mild hybrid technology gives this BWM a solid performance and a good mileage for a sports car. It gets a 28 miles per gallon combined and 25/34 city/highway. Speaking o the hybrid technology: BMW says "The excess energy is converted to electricity by the 48-volt starter/generator and stored in the 48-volt battery. This energy can be used by the starter/generator unit to boost performance during hard acceleration or by providing power for electronic systems, thus reducing the load on the engine and improving overall efficiency."

The 4 Series coupe is an all-new model, so nearly everything about it is significant in some way.

But let me tell you more below.

In the 2022 model you will find only few small changes that BMW has made to the 4-series Coupe and Convertible. They are not major changes, but still worth mentioning. The 2022 M440i Coupe model now is offered in a rear-wheel drive configuration and the ambient interior lighting is now standard in all trims. Our vehicle had the optional Premium package, which adds an additional $1,600 to the price of the vehicle and includes power lumbar support, a head-up display, and gesture controls for the car's infotainment system. 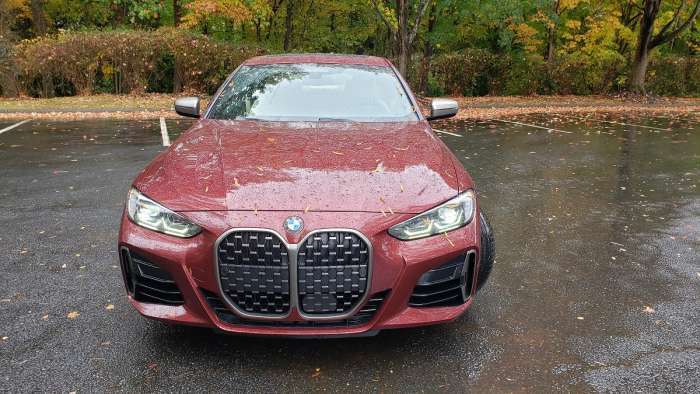 The 2022 BMW M440i's imposing front end dominated by a large grille with BMW kidneys, its elegant silhouette with coupe lines and its powerful rear, typical of the M series, ensure that the car does not go unnoticed on any street or road, no matter how busy and noisy they are.

So far, the 4 series has been considered by many to be simply a 3 Series Coupe. But since that was never actually the case, BMW wanted to set clear signals with the new generation and, without further ado, gave the vehicle a distinctive front in the form of a vertical kidney, drawn a sideline that pushes the Coupe further towards the ground and gives it a distinctive and very strong shoulder on the rear fenders folded into the sheet metal and also tightened the rear. All of this suits the BMW M440i Coupe very well and clearly sets it apart from the 3 Series.

In the end, however, the visual separation from the 3 Series was not enough for those responsible and they made sure that the 4 Series drives like a real sports Coupe. You will have that real sports Coupe feeling if you test-drive the 2022 BMW M440i. Yet, BMW's aim was not to create a car that could survive on the circuit, rather the aim was to put a dynamic vehicle on its wheels, which doesn't wiggle the driver's seals at every transverse joint, but also offers the comfort that is required for all driving fun it needs for well-groomed long-distance driving. In the end, BMW has balanced the act of sports performance with premium manufacturing. 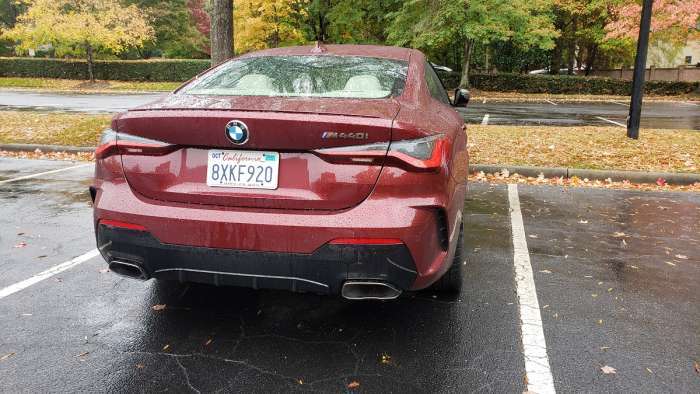 If you still want to take it in the direction of sport, you can optionally have the M sports suspension attached to the chassis. Those who like it more balanced can order the Adaptive M suspension with variable sports steering.

Torque News reviewed and test-drove the 2022 BMW M440i Coupe in Charlotte, NC, which is not entirely fair to this vehicle, because under the hood of the 4 Series, which has already been ennobled with the letter of the BMW sports department, ignites the well-known three-liter in-line six-cylinder with twin-turbo charging, i.e. a small and a large charger that helps the propellant to breathe. This vehicle needs to be tested on a race track.There is also an additional boost of 11 hp for the petrol engine, which already provides 387 hp, thanks to the 48-volt technology.

When the driver touches the very thick steering wheel, the driver immediately feels the power, which the 8-speed Sport Automatic only needs for a sporty driving style. BMW offers five driving programs for the 2022 M440i: Sport, Comfort, Eco Pro, Adaptive and Auto H.

Of course Sport is the levels that not only promise an emotional sound, but also ensure a sprint from 0 to 60 MPH in 4.5 seconds. However, my favorite driving program is Eco Pro, which will offer you the best mileage.

BMW is known for giving the steering a very tight and sharp character, especially in its sporty offshoots, which can sometimes cause some unrest in the vehicle if handled incorrectly. Not so with the 4 series. The variable sports steering applied here shines with high precision, without even appearing bitchy in the beginning. 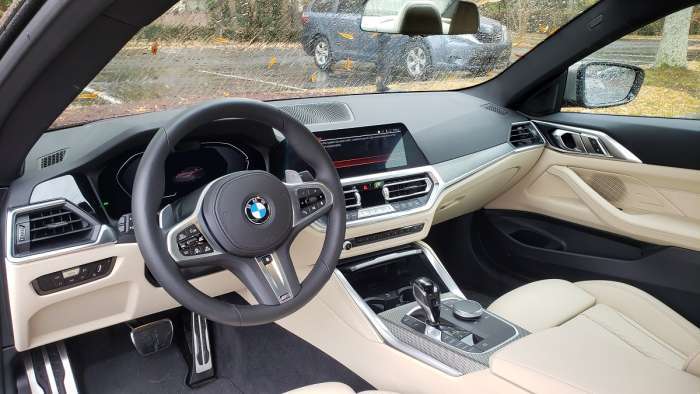 Even with quick load changes, the car remained surprisingly quiet, pushing, as you would expect from a BMW. You know, everything has its limits and even an M440i will eventually get in the way of physics. One final praise is due to the M sports brake system, which is installed as standard in the M440i and, thanks to its short pedal travel and excellent controllability, ensured excellent decelerations in all situations.

But again: even as the M440i, the 4 Series is not a racing car, it primarily stands for relaxed journeys.

BMW offers lots of good features. Active navigation guidance and the automatic emergency lane assistant are available either individually or in packages. A new and really brilliant head-up display and 3D environment visualization in the center of the cockpit display would be another option. Likewise the parking assistant, which is only available in connection with the reversing assistant. It remembers the distance it has driven forwards and can drive it back exactly that way in an emergency. Great thing if you accidentally drove into the underground car park and found below that the paths are blocked. Well, if you want to get more options, you have to pay for it and pay well. 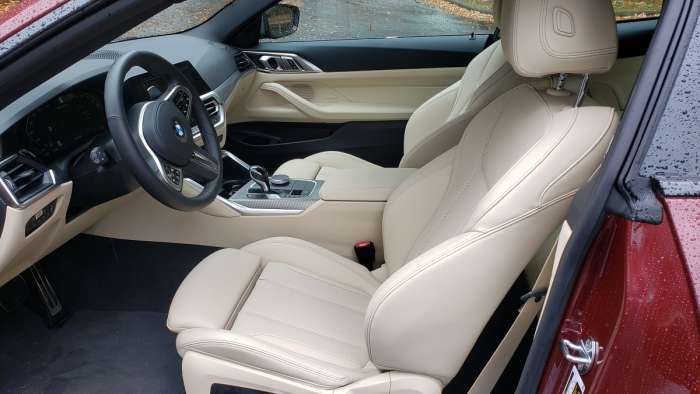 The M440i is as agile and dynamic as the 3 Series Coupe, conveying enormous driving pleasure while offering pleasant ride comfort. In fact, it is built on the same modular platform where the electric i4 and the 3 Series Sedan and 3 Series Touring are manufactured, at the BMW Group plant in Munich.

I particularly like the comfort of driving this sports car with mild hybrid technology, its agility and the 6-cylinder in-line mechanics.

John Goreham wrote on November 8, 2021 - 11:11am Permalink
This summer, my dad, my son, and I all had a chance to "race" the M440i Coupe around an autocross track and on a short dragstrip. Its torque and overall performance smoked the non-hybrid 4 Series coupes on hand for comparison. Such a great powertrain.

LG's New EV Battery Plant Is a Welcome News for Tesla
Tesla Giga Berlin's New Hurdle: It's Not Only the Gov't, but Now Tesla Itself
END_OF_DOCUMENT_TOKEN_TO_BE_REPLACED