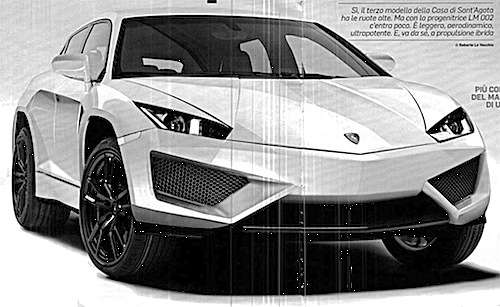 Look at This Lamborghini SUV Muscle With A Sleek Wrapping

Anyone who remembers the eternal LM002 asks when will Lamborghini make another memorable SUV.
Advertisement

Wait no more, word from Audi leaked that a new beast that will finally challenge the real SUV crowd by throwing in a real sports utility vehicle, although crossover would fit it better. The spiritual successor to the remarkable LM002 will happen and at the same time kick up the competition notch.

LB736, Where Are You? The Lamborghini concept at the Paris Motor Show a while back had many wondering if Lamborghini was coming back to the SUV scene. For those of you unfortunate enough to have never seen the original Lambo SUV, the over the top LM002 behemoth, this SUV defined power and performance, unmatched by any other makers. The LM002 was huge, even compared to today’s’ trucks. I had the privilege to see one next to a Hummer in a quaint Costa Mesa, California shop and let’s just say that the Hummer looked puny next to it… The LM002 was conceived as the ultimate SUV to own. The Alpine Italian army had a few roaming the high Alps borders and it was quite a sight. Some of my close off-road racing friends witnessed LM002s in action and were stunned. If regular SUVs would jump 3 to 4 feet in the air, the LM002 would do 1 foot, no more. Armed with Lamborghini’s power V12, it was a force to be reckoned with.

While rumors abound about an eventual SUV, Lamborghini itself hasn’t confirmed anything yet. An Audi senior confirmed the rumor that the company would introduce one at the Beijing Auto Show in April.

Technically Speaking. You would have bragging rights with this SUV Lambo. Slightly over the Maserati Kubang in term of price by an extra $50,000, the Lamborghini is expected to fetch around $200,000 and will only be produced as a low-volume vehicle totaling 1,500 a year. As we’ve come to expect from the exotic carmaker, a V10 will find its way under the hood and not a V12, as was the case for the original one. Chances are it will sport a detuned version of the Gallardo’s 5.2 V10, which currently develops 580 hp. Would 500 hp do, if you could have over 600? And purists sit down, take a deep breath but a hybrid version is also considered coupling the V10 to a 107 k/w electric motor using a lithium battery pack, pushing this rig north of 600 hp.

The platform would share the next version of Audi’s Q7, as would be expected. It is rumored to also provide the chassis for the next Bentley off-roader. Yes, a Bentley off-roader. In many ways, this is where Lamborghini could make the most significance in the automotive industry by introducing a high-end hybrid SUV, something not done yet but that we could only expect of the brand.

By using aluminum and other lightweight sturdy materials, such as carbon fiber, the VW groups has announced it could save close to 880 lbs on the final vehicle curb weight. The Lamborghini is expected to weigh in at less than 4,400 lbs and thus insure performance meets expectations.

Aesthetically Speaking. If the original LM002 was all corners, the new SUV will be sleek, low swung and sport the familiar Lamborghini front fascia. The body design is more in tune with today’s aesthetics and makes it more a crossover than an SUV. The design will have subtle Italian touches. It will be interesting to see how it will compare to the Maserati Kubang and other newer models.

Why A Lamborghini SUV? While reason sometimes plays a role in our crazy auto industry, an SUV from a sports car maker makes some sense at some level. First, it would be easy to build upon the legendary LM002 but it would also come in at the heels of the Maserati Kubang introduction and BMW’s X6. It would also add competition to Porsche’s Cayenne, so far leading the way in the luxury and real sports SUV segment. Another player ion the field is Mercedes who also recently announced an off-road SUV rumored to be called MLC. The key markets are expected to be the US and China, believe it or not. This concludes the overlook of this exclusive SUV segment ruled by a few well-established car manufacturers.

So will the Lamborghini SUV make a dent in the highly exclusive world of SUVs? Probably not but it will definitely raise the bar of crossover performance, something we come to expect from the brand. In the meantime, I’ll wait to test drive the spiritual successor to the ultimate Lamborghini SUV, the LM002.

Don Bain wrote on February 21, 2012 - 6:05pm Permalink
It's too squat to be called an SUV. It's a crossover anonymous!
Nicolas Zart wrote on February 22, 2012 - 10:55am Permalink
I agree but somehow I see both SUV and Crossover associated with it. Ultimately, if it uses the Q7 platform, it could be considered more a crossover than an SUV although it tips close to SUV in terms of size. Nonetheless, that's over 600 ponies for an SUV/Crossover...

Toyota's First EV Will Have a Name of BZ: Toyota BZ
First Videos From Inside The Boring Company's Las Vegas Loop
END_OF_DOCUMENT_TOKEN_TO_BE_REPLACED