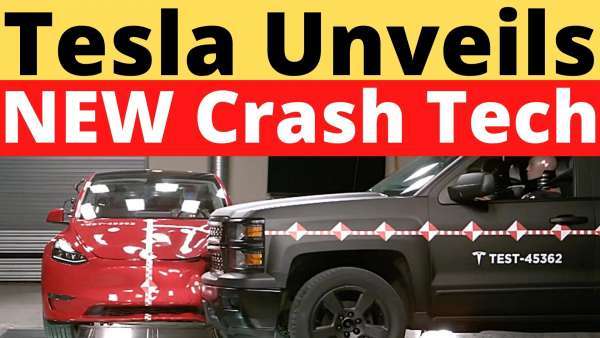 Tesla unveiled a new crash safety technology based on real-world data collection using its large fleet of vehicles equipped with sensors for its self-driving technology.

Tesla released a new window on Tuesday, October 12, about some of its latest technology differentiators, which came about a month after the EV-maker released a look into its “Tesla Crash Lab” as its engineers were testing a new crash safety technology.

In this new video a Tesla safety engineer going by “Dan” explains the problem with an existing car safety design, saying "previously, the best way to design a car was through industry-standard crash testing. And those crash tests are like a few grains of sand. Those grains of sand are meant to represent the beach, but in reality, the beach is infinitely complex. Every crash is different."

He then described with Tesla is doing differently now:

With emerging technologies, there are opportunities. Now we can look at the real world and design for that.

A user, named Antony, comments under Tesla Electrek's coverage of the subject and says "The most interesting part was the end. If they are successful in their simulations and real-world tests, they will be able to push this update out to the fleet.

"Before, Tesla used to figure out ways to make your car be more efficient or have more comfort through OTA software updates. Now they also appear able to make the car you drive safer with software updates."

The fact that they can push a software update to their car and make it safer just shows how much Tesla is ahead of everyone.

It's amazing to see so much going behind designing the car's safety system. Valuing human life is so good, wish more companies do it.

LG's New EV Battery Plant Is a Welcome News for Tesla
Tesla Giga Berlin's New Hurdle: It's Not Only the Gov't, but Now Tesla Itself
END_OF_DOCUMENT_TOKEN_TO_BE_REPLACED