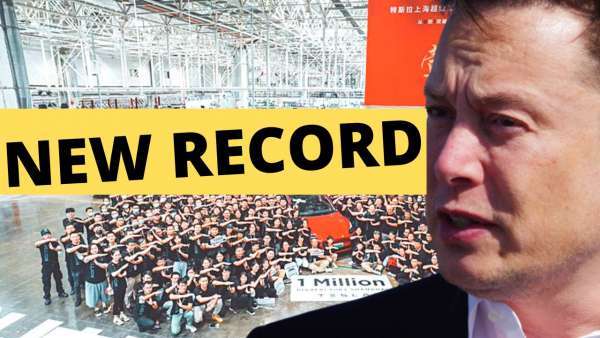 Tesla has produced more than 3 million vehicles, a third of which were built in China. Elon Musk tweeted this over the weekend. Tesla stock surged higher on Friday and is poised to break the key 200-day moving average.

Note that Elon sent the congratulations just weeks after the Tesla factory in Fremont, California, produced its 2 millionth car.

An intermediate step for Elon Musk. Recently, Tesla has built new plants in Austin and Berlin. There should be ten to twelve gigafactories in total.

“With this, Elon Musk not only wants to satisfy the unbroken demand for Model.3 and Y, but also to penetrate the lower price segments. And he will manage to generate a profit margin that is just an unattainable dream for many today," says futurologist Marion Herger to the AKTIONÄR.

“One thing is being overlooked: Tesla not only makes cars, but a network. According to the second master plan, each of these cars should be able to drive in the Robotaxi fleet and generate money for the owner,” adds Herger.

Tesla is aiming to increase its production capacity to 20 million cars per year by the end of the decade.

I am reading online comments about Elon's Giga Shanghai announcement, and under Electrek's coverage of this topic, one person says, "20 million EVs a year will cut oil demand about 1.5% a year every year cumulatively. Tesla by itself will be supplying maybe 15% of all cars sold annually worldwide. Add in other automakers put together hopefully matching this rate or more and you are cutting oil use by 3-7% a year. With that kind of demand destruction the age of oil is dead man walking!"

Tesla Contemplates A New Strategy for China Retail even As Sales Boom
Jay Leno on Elon Musk & EVs: “I Think He Should Get ... Credit"
END_OF_DOCUMENT_TOKEN_TO_BE_REPLACED