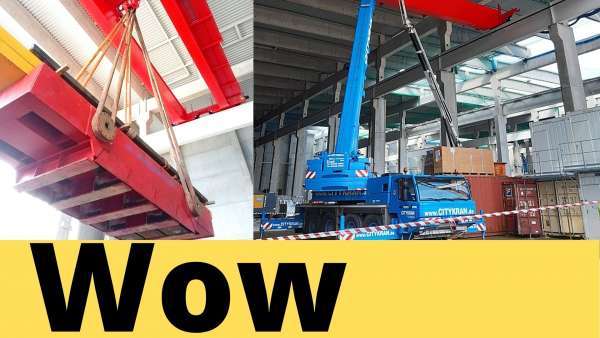 Tesla Giga Berlin achieves a new milestone in the heart of the factory with a new huge crane.

We have a rare insight into the assembly of a 100 ton indoor crane at the Tesla Giga Berlin factory in the 'Casting' (CA) area. After a 5 day set up phase and after the check of all functions the crane immediately started its operation to assemble the Giga Presser, which is going to diecast the unibody of the upcoming Model Y electric crossover at Giga Berlin.

The news came from the BANG Kransystem GmbH, who posted the images of the new huge crane at the Giga Berlin's casting area, which is going to be the heart of Tesla's first European Gigafactory.

We are talking about a 100 ton process crane, mounted and approved for operations at Tesla Giga Berlin within 5 days. The two-bean bridge crane has a load-bearing capacity of 100t on the main hoist and a 60t auxiliary lift. The crane immediately started with its first job after the approval, which is the construction of the patented machine: Giga Press.

If small and medium-sized enterprises take something into their own hands, then it will work. Congratulations to the team.

As you can see Tesla Giga Berlin will have dual crane on one line. I think they are to change the molds and bring materials to the melting furnaces.