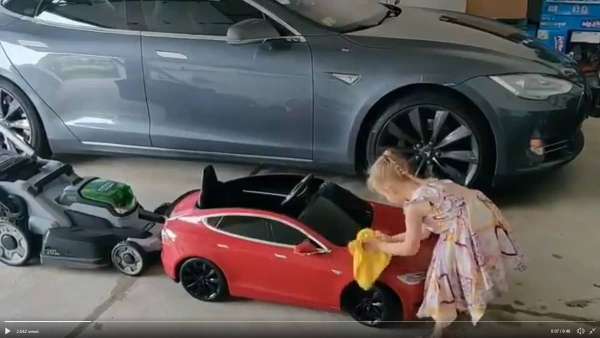 This is probably the cutest Tesla car wash you have seen. Elon Skywalker, who shared this video with Torque News readers, was washing his Tesla Model X when his daughter joined him and started singing this cute song.

"My daughter surprised me today. We were in the garage, and she decided that she wanted to clean her Tessie. Then in our shared spirit of Tesla, out of the blue, she started singing "Tessie is going to be alright," Skywalker wrote.

He also added that kids love Teslas and one of the first words his daughter said, when she began speaking, was Tessie. "Future is electric, its fun and it's Tesla," write Skywalker. "The negative narrative of the media ignores the fact that the next generation has already voted with their imagination of what their future will be like," he added.

Do you like this Tesla car wash? Probably it's a good thing to wash your car with your children as a way of spending good time with them doing a useful activity.

Please subscribe to our channel and follow us for more interesting stories about Tesla, EVs and cars in general. Send us your tips.

Please, subscribe to Torque News Youtube channel and ring the bell to be notified when another Tesla video is uploaded later today and daily.