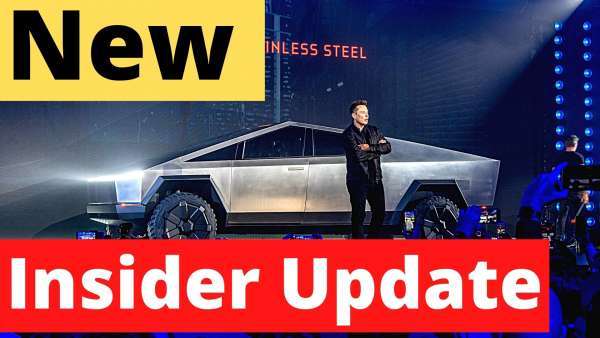 Insider Info About Why Tesla Delays Cybertruck's Production To 2021

"Tesla’s production of the all-electric Cybertruck may have been pushed back due to design finalization by company engineers who have been modifying the vehicle’s dimensions and look," referring to a tweet by a Tesla information provider Sawyer Merritt.

This won't be much of a surprise but I've been told designs were just recently finalized for Cybertruck. Tesla said on the Q2 earnings call that "Cybertruck is at a stage where we finished basic engineering of the architecture; We're moving into the beta phases later this year."

Tesla is prioritizing Model Y over Cybertruck when it comes to Giga Texas production. In fact, a few days ago Giga Texas information provider Joe Tegtmeyer tweeted, writing "Giga Texas should start the 1st batch of test pre-production runs of the Model Y this week. These are test cars for calibration and training and not for sale. Tesla Goal is to begin initial production in early October. A lot going on inside as well as outside!"

Friends, regarding Cybertruck’s production timeline and update, we’re talking about a matter of a few months difference. "Next year when Cybertruck is doing cool things on YouTube we’ll be just as excited. I’m just happy to see the factories getting done, 4680 cells being validated, and Cybertruck designs being finalized," comments one person under Teslarati's article.

Regarding Cybertruck’s production update, the general thought in the Tesla community seems to be related to batteries. People say the delay for Cybertruck is likely to be due to a delay in the progress of battery technology. Cybertruck needs lots of cheap, reliable, high capacity, and proven batteries. We have been told many times that the Cybertruck will use 4680s and It will certainly never meet its low $39k price without the cost savings promised with the 4680s. The same goes for the Semi.

Thus, unlike the Model Y, Cybertruck can only be produced using 4680 cells to achieve the promised range. So, no Cybertruck until the stable volume production of the 4680 cells.