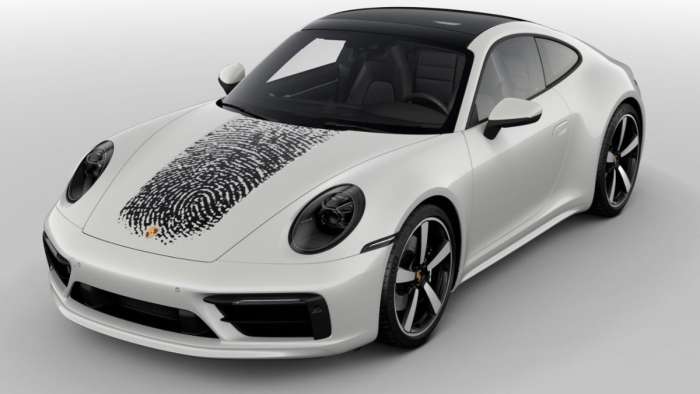 Porsche Offers Personalized Fingerprint Graphics To Put On Your 911

As the 992 notebook unfolds further, Porsche adds yet another unique option for their flagship model. And this time it’s the paint.
Advertisement

Porsche’s willingness to take specific customer requests has been a sweet, little known reality for decades. Considering their humble beginnings as a tiny, German car consulting company, it is no surprise they had a more personal relationship with their customers, especially as they began developing cars of their own.

The most famous example of Porsche’s compliance with special orders was an early Porsche 356 that a gentleman ordered to be covered in fur. As a precursor for the 1960s, it is almost too accurate and we love that about Porsche. So, to continue the tradition, Porsche Exclusive Manufaktur will now put a scanned image of your finger print on the hood of your 911.

Here’s what Christian Will, Vice President Production Development at Porsche AG had to say about the process of Porsche’s newest personal option: “The operating principle is similar to that of an inkjet printer: using a print head, the paint is applied to three-dimensional components automatically and without overspray. ‘The ability to control the nozzles individually permits targeted application of every paint droplet. The complexity is due to the necessity of harmonizing three technologies: robot technology (control, sensors, programming), application technology (print head, graphic handling) and paint technology (application process, paint).”

Judging from Will’s statement, Porsche put quite a lot of time into this project, especially after developing the 3 stage process for applying the paint. Although it’s a somewhat odd thing to offer, it isn’t surprising that we are seeing so much activity from PEM. From the Taycan’s 600 different option combinations, to the 992 Aerokit package, and now the fingerprint livery, Porsche is putting all that Macan money to good use.

Since the late 70s, we’ve been an audience to Porsche’s official custom design department, and since 1986 we have known them by the "Porsche Exclusive” denomination. That’s where all the rare slant-nose cars come from; specially ordered, expensive factory options. The fingerprint on your hood is the next modern-day rare-factory option, and will set you back a healthy $8,100. Is it overpriced or worth it to have a one-of-a-kind factory Porsche?

Well, if you are expecting an answer you may be sorely disappointed because, like we know, customization is for the customer. Looks are subjective like water is wet, but looking at the other most expensive options from PEM, it starts to become questionable. The 992 Aerokit in its complete form is only $7,000, and those are physical body pieces which are historically expensive to make. We’ll leave the decision up to you, is it worth it, or is it a gimmick?