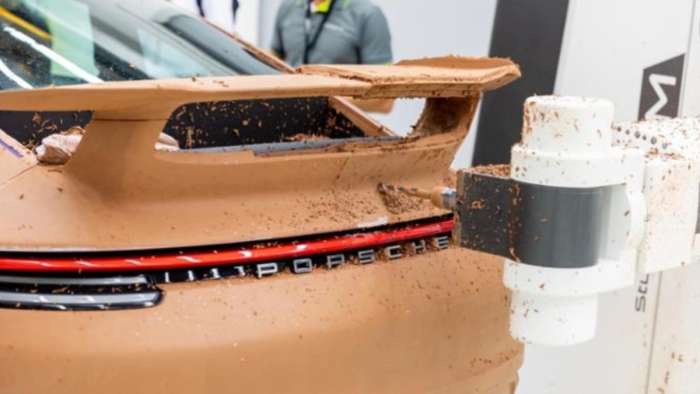 Porsche's Exclusive All New Exterior Packages For The 911

With the release of the Taycan, Porsche’s Exclusive Manufaktur has become bigger and more active than ever, and now the warehouse is wrenching on Porsche 911s.
Advertisement

If you are spending $100,000-$200,000 on a car, shouldn’t the company give you everything that they have to offer? Porsche seems to have believed in that for years, and their most recent announcement will continue that promise with the work of Porsche’s Exclusive Manufaktur.(PEM)

Porsche says that there will be just two new packages available to check on the options list of your new 992 911 compared to the huge number of new accessories for the Taycan, however starting out slow on a project like this may turn out to be wise. Porsche calls the first set of modifications the SportDesign package.

This option includes a redesigned front apron along with a splitter that will sit under the apron. We expect these pieces to be match-able with the rest of the car, similar to the Taycan which we’ll touch on later. The SportDesign package will also give the 992 a new rear bumper which accommodates a refreshed license plate area and outtake vents at the corners.

Next is the Aerokit. Available on all 992 coupes, this package has all the neat little fixings of the GT 911s, only you don’t have to spend the money to get the top trim level car. Starting at the front of the car, and much like the SportDesign package, there will be a front splitter hanging under the valence. The kit includes a wing and an additional spoiler on top of the wing for significantly increased down force. One thing that the two styles share exactly are the race-inspired side skirts.

Porsche's new Character: Worth It?
These side pieces add a whole new character line that runs from the front wheel to the back. I wouldn't call them beautiful or really even purposeful though. They may have some positive effect on the aerodynamics, however, they add so much visual weight to the car for such a thin piece. Be my guest and call it what you think it is. Looks are subjective, and maybe for the younger crowd it recalls mods that they have loved from the past 2 decades of tuner cars, but for now we’ll just wait until we see it in person.

Porsche claims all the optional exterior mods are purposeful for whether it be performance reasons or aesthetic reasons, but I think this is a combination of the brand tasting new flavors and exploring their new found assets (Exclusive Manufaktur), which brings us back to a the idea of companies giving customers their money's worth. Right before the Taycan hit the streets with actual owners behind the wheel, Porsche invested huge amounts of money into its… let’s say chocolate factory. They wanted to wade in the waters of more thorough customization, and offered 90 new finishing options for the car.

Speaking of the Taycan, watch this new video walkaround of Taycan's exterior and interior and click to subscribe to Torque News Youtube for daily automotive news analysis.

Pricing of the new Porsche 911's external modification is supposed to come out at $6,910 for the Aerokit, and $4,890 for the SportDesign package. I was expecting a lot more for brand new options on a 911, especially since they are exterior styling options. Usually these types of options are through the roof on the high-end European stuff, but Porsche decided to keep it at a bearable price point.

As I said in my piece about PEM and the Taycan, the kids who grew up with the Fast and Furious tuner scene love wild customization options. Big splitters, wings, and side-skirts slammed on the tarmac are parts of those kids’ special, poster cars. And now, those teenagers who saw that culture arise before them 20 years ago, have the money to make those dreams a reality. This is how car markets have shifted and will shift for years. The guy who is 200 years old and very wealthy probably has that Ferrari 250 GT SWB Berlinetta sitting in his garage because that is what he had on his wall. But now money is in the pockets of those who had the Hachi-Roku AE86 on their wall, and car companies, including Porsche, know it.

Please, red my next story in which I discuss 4 reasons why a Subaru motor swap with Porsche is a good idea.