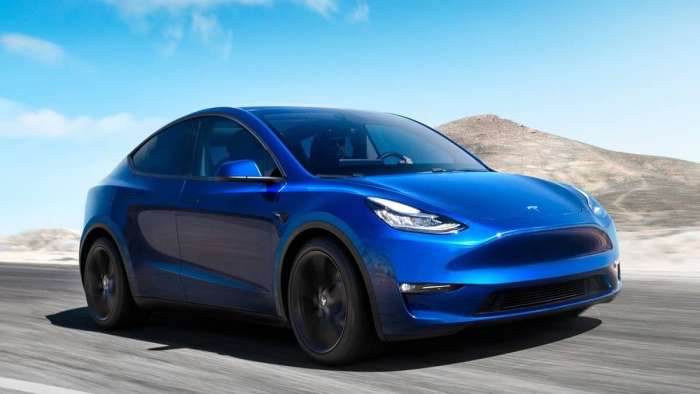 After an impressive earnings call, Tesla Model Y has finally begun production down where Tesla began, California, Fremont to be exact. The Model Y is shaping up to be arguably one of the most impressively sold cars of 2020. A new range of 315 miles, and deliveries by the end of the quarter, and features galore.
Advertisement

People in the know will recognize this car to have the same features that most Tesla’s have. The stereotypical look that for some reason resembles a fish in the front and a sleek rear end that screams safety. Don’t get me wrong though, this car is pretty. It has 66 cubic feet of cargo space, 315 miles of range, AWD dual motors, and an improved autopilot.

The Tesla Model Y above all things puts safety at its core. The brand has always been serious about safety. The Model Y is targeted at being the safest car in its class. Large crumple zones and a rigid body structure maximize safety in the forms of impact resistance. Additionally, a low center of gravity which keeps it planted and torqued to the ground like a supercar.

The Model Y has utility, there is room for seven passengers, variable seating and an easy access trunk for practicality. Seven adults in a small crossover is honestly impressive, there is an optional third row that accommodates the extra passengers and all their baggage (both mentally and physically). One cool thing about the interior is that the seating is variable from the second row and beyond. The seats either fold upward into standard seating position, or they fold flat for versatile cargo area. You could easily fit a Christmas tree back there or maybe even a large piece of furniture. If you are going to load furniture though, the Model Y has thought of a solution.

An ultra-low trunk floor allows loading your junk in to be as easy as ever. The interior also features a trademark 15 inch “iPad-like” screen that improves over time, and “over-the-air” software updates that introduce new features and performance with the touch of a button.

Another super impressive aspect of this new car is the all-wheel drive system. It uses dual motors that modulate power and torque to the front and rear wheels. This allows superior all-season traction and impressive feats of acceleration. The Model Y flies passed my tuned Subaru WRX at a shocking 3.5 zero to sixty time. This is a crossover that looks like a mom car, and it gets to sixty in 3.5 seconds. The AWD system is particularly good in the elements like rain and snow. The digital controls allow torque to be instant, which stops traction issues in their tracks. It also allows for tight handling due to the impressive control.

One of the best parts about the Model Y is the range. Tesla really shows that they have a chip on their shoulder with this one. 315 EPA estimated range means that it is the longest electric range SUV in production. After researching a bit further, I learned that the Model Y can recharge 158 miles worth of charge in literally 15 minutes at one of the Supercharger stations. That is insane. That means you can completely recharge your battery on a road trip while you’re getting lunch or shopping. With, Elon claims that there are six new Supercharging locations opening each week, with currently more than 14,000 on popular roads.

Queue the controversial paragraph that explains the Model Y’s outstanding autopilot features. To begin with, it has complete 360-degree camera visibility, it has up to 160 meters of depth perception, and it has twelve “Ultrasonic sensors” that detect minute changes. These sensors are one of the reasons why the autopilot has come as far as it has. These sensors detect very small and detailed changes that are what make the difference on the road. They are what help the computer mind of the Model Y to help park the car, detect nearby cars, and ultimately prevent error.

The autopilot has a commanding 160 meters of forward-facing vision to provide a strong view of what is ahead. Without a successful system in place here collisions could be very common making the autopilot untrustworthy. Tesla has developed an impressive product here. Tied into this depth perception functionality, is the amazing circular camera visibility that the car has. It features cameras on the rear, side, and front end that allow the car to know everything that is surrounding it. This is the future of driving.

The Model Y and The Competition

With deliveries on their way, we will see what the public says about the first Model Y’s as they release.

See you in our next story discussing how Tesla Cybertruck's callout by GMC Hummer EV and Lebron James soared the shares by 20%.

DeanMcManis wrote on February 3, 2020 - 1:07am Permalink
Yeah, Tesla definitely has a whole lot riding on the success of the Model Y, both in the U.S. and worldwide. They have taken the best bits of the Model 3 and applied them to this new crossover body, and then did some additional tweaking to make it better. I think that it was very smart of Tesla to bring the Model Y out early. There is a strong chance that several competitive EV crossovers will be coming out in 2020, but for right now there is nothing that competes in range, efficiency, price, cargo space, technology and performance. And that applies for both the Long Range and Performance models. There certainly are competitors that match or beat the Model Y in one or two areas, but not all. The Mach-E will come the closest from the EV crossovers that we know about, but the Mach-E GT is not due until next year. And even ignoring price, there is no EV crossover out yet that approaches the Model Y Performance's acceleration capability. For the Model 3, only the Porsche Taycan "Turbo" is quicker, and it costs nearly 3 times as much.