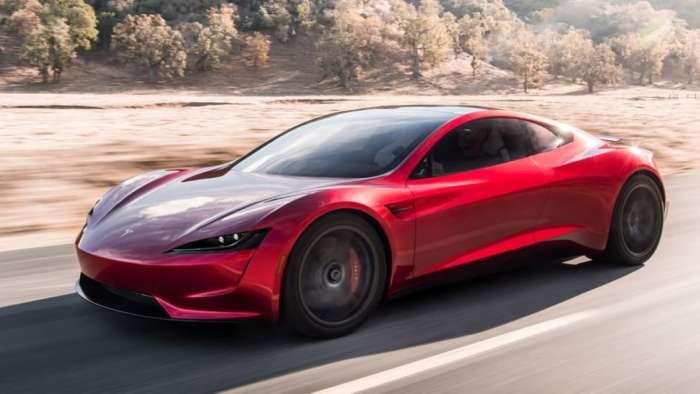 The Tesla roadster is promised to be one of the most capable cars on the road. It is supposedly light weight, it’s entirely battery powered, and it has a 250mph top speed. This is an extremely capable car. The specs are outstanding with values as high as 7,376 and insanely quick times. The Tesla Roadster that was introduced in 2017, is a car that is definitely going to be impressive.
Advertisement

When the Tesla Roadster actually releases and Elon begins delivering it to his [probably] very wealthy customers, a transition for enthusiasts will occur. The immediate torque at 0 rpm is what makes an electric car incredibly fast. Pair it with a lightweight body, ultra-low center of gravity (from the massive battery) and the help of 3 motors. These 3 motors actually give the car all-wheel drive which added which will give it superior grip.

The range is probably one of the craziest parts of this car. Elon claims the Red Tesla Roadster will have 620-mile range. That is insane for a sports car.

My sports car daily, a 2015 WRX, gets roughly 320-miles per tank if I’m city driving. Cruising on the highway I can get to 40 mpg but that still does not compare to the range this far superior sports car achieves. The Tesla Roadster is not only a range champion, but it goes 0 to 60 miles an hour in less than 2 seconds. That is nutty. The impressive 200kwH battery that powers the three motors up to 7,376 lb/ft of torque to all four wheels. This experience might actually break someone’s neck. This car is going to be very fast. There actually videos from Tesla that show people riding in one of the early test models with the caption “what 0-60 in the new Roadster sounds like” and its basically a bunch of people losing their tots and yelling profanities at the extreme acceleration.

Elon also promised that this car will be far superior to any other car at its dollar value ($200K). When he says superior, he means both on the streets and on the track. The design of this car is track inspired and seems like it will deliver massively impressive results on the track.

The low center of gravity, short wheelbase, and reduced weight chassis will have outstanding performance around curves. Not only that, but immediate torque could provide some impressive exit speeds. I can just imagine the grip and I know that my imagination isn’t even close to what it would really feel like. As I write this article, I am promising myself that I will drive one of these at some point should they actually release.

On top of the extreme speed statistics and impressive track presence, the car is outright beautiful. It is beautifully Tesla in its creativity with lights. The headlights of the Roadster sort of resemble those of the Porsche Taycan. Its body and shape honestly resemble if the NSX and a new Porsche Cayman had a baby.

Should the Roadster release, or should I say when, it will be held to a high standard. What we do know is that Elon has delivered on a majority of his promises when it comes to his products. I would imagine he would deliver on this one. Especially with how big the performance community is at this point in time. With outrageous numbers like 0-60 in 1.9 seconds, top speed of 250mph, and 7,376lb/ft of torque this car is sure to be a crowd pleaser. Here’s to driving it one day.

DeanMcManis wrote on February 7, 2020 - 8:01pm Permalink
I had read that Telsa revised it's acceleration estimate to be 2.1 seconds to 60MPH, but 1.9 with the optional Space X package. The Space X package is rumored to be a compressed air tank in place of the rear seats and 10 cold air rocket thrusters that help in acceleration, braking, and cornering. Sound like Science fiction? Yep, but so would the idea of a 7 passenger family sedan that weighs almost 5000lbs getting to 60MPH in 2.3 seconds! The other impressive specs of the upcoming Tesla Roadster are an 8.8 second 1/4 mile time because it is a HUGE feat to have today's multi-million dollar hypercars get through the 1/4 mile in under 10 seconds (the quickest Tesla Model S does it in 10.5 sec today), so shaving another second off of that acceleration time is astounding. Lastly is the proposed 200kWh Roadster battery that achieves that 620 mile EV range. Sure, Tesla would have no problem getting 600+ miles range for a 200kWH battery, seeing that they are getting an impressive 373 miles from their 100kWH battery in the Model S. The amazing part will be having a 200kWH battery pack that doesn't add 3000lbs to the Roadster, and fits in the relatively small sports car body. Even though the weight and size of a 200kWH battery that is twice the size of the Models S's battery pack would be tolerable in the Tesla Semi, both the great weight and size of an immense battery pack would be unacceptable in a hypercar. So I think that Tesla will unveil an enhanced battery technology (or two) that will allow them to reach their outlandish performance and price goals for the Roadster.
Scott wrote on March 1, 2020 - 3:00pm Permalink
The 2.1s time is 0-100 km/h. It’s still 1.9 for 0-60 mph. Elon miss-tweeted and created that myth. The space x package will be 0-130+ mph in 2 seconds based on Elon stating the thrusters will provide 2gs of force for a significant amount of time.