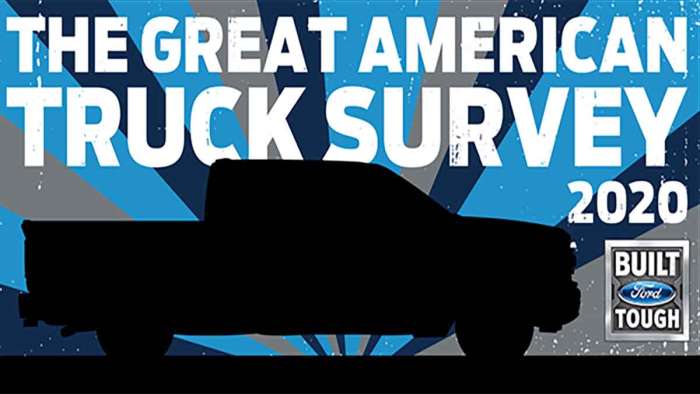 Recent Survey Reveals Truck Owners Would Rather Give Up Beer, Cell Phone Before They Give Up Their Ford F-150

Ford asks truck owners why they love trucks so much. Results show love of truck runs deep, across demographics.
Advertisement

So with that preconception, Ford hired the surveying firm Penn Schoen Berland to poll 2,000 truck customers from around America to learn more about them and their reason they prefer a pickup truck. The results are quite revealing to say the least.

The survey spanned many demographics including executives to construction workers, additionally the firm interviewed people ranging in age from 18 to 65+. And 54% of men were interviewed to 46% of women. So the results are diverse and give a strong look at the truck consumer mindset. 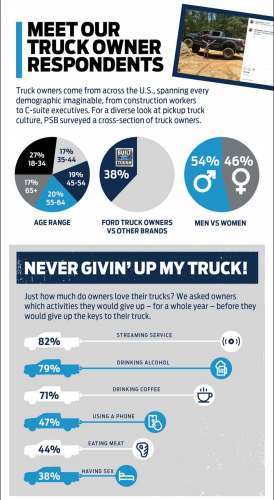 What Would You Give Up Your Truck For?
This question was asked, or rather phrased as such: which activities would you give up for a whole year before they would give up the keys to their truck.

That is deep-rooted truck passion, for sure.

Putting the Work In Work Truck
The pickup truck is at the root of the American working class, but it transcends that. But, that hard-working mindset is one of the things that consumers all share, according to the survey.

Aaron Ahuvia, marketing professor at the University of Michigan said, “America loves because they connect us to an enduring American cultural truth about the resiliency, hard work, and undaunted determination of Americans to tame frontiers, build big things and overcome adversity – needs that have come to the fore today.”

Ahuvia went on to say, “Trucks have earned their iconic status by giving builders and dreamers the flexibility and power to get things done and control our destinies, especially in challenging times.”

During the recent pandemic, the love and hold of the truck was further rooted. The survey revealed that truck owners use their vehicles both to get to work done and as office that they can take anywhere. A part of the survey results said:

“Trucks are more than a tool for the people who drive them. They’re like a member of the family even getting their own names and even tattoos on their human companions. Trucks are a source of pride for their owners they want to show them off and keep them in top shape.”

Some of the words truck owners used to describe what owning a truck felt like: capable, accomplished, proud, self-reliant and dependable.

Further, 25% of the respondents have given their truck a name and 15% of truck owners have a tattoo of their truck or related to their truck on their body. Now that’s devotion!

As we know, Ford is bringing an all-electric F-150 to market in 2022. A lot hinges on that, and the survey shows some skepticism, yes, but also shows some open minds to accept electrification.

What Worries Truck Owners The Most About Electrification?
This was the most eye-opening question on the entire survey, to me. Owners were asked what would make them switch to an electric pickup and here are the results:

Ford is armed with all this data as they map out the future of America’s top-selling vehicle. The big reveal of the 2021 Ford F-150, which will be the 14th generation, is June 25. We will have all of that covered for you here at Torque News.

But, for now, I want to hear your thoughts on this survey. Does any of it shock you? Do you agree or disagree with portions of it? Weigh in truck owners and leave me a comment.