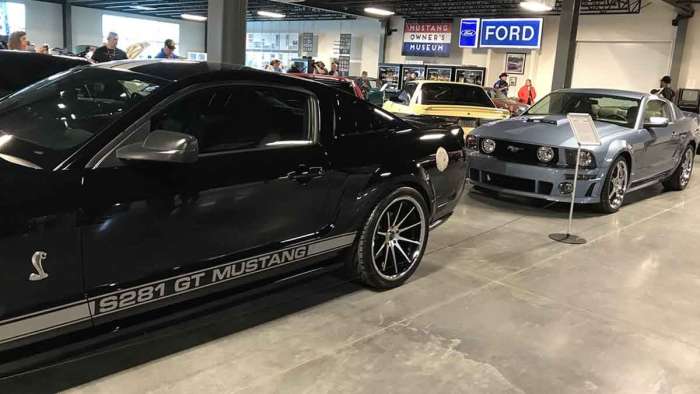 The much-anticipated Mustang Owner’s Museum changes location after only being open a short time. What this means for the Museum and the Ford Mustang community remains to be seen. Find out the Mustang Owner's Museum new location.
Advertisement

When the Mustang Owner’s Museum opened last April, many enthusiasts were excited. There had been talk for years prior about creating such a museum for Mustang owners to enjoy where they could see special edition Mustangs and celebrate Mustang heritage. Opening the Museum during Mustang week last year, on the 55th anniversary of the Mustang’s debut no less, was also good planning.

So it’s disheartening to hear that the Museum has already changed locations, due to what appears to be financial issues. On their Facebook page, the Museum released this statement (officially):

“The Mustang Owner's Museum has moved to a new location-4005 Dearborn Place, Concord, NC 28027.This location is literally across the street from the previous location. Of course, the next question is why move? We made the decision to move to a location that will allow us to grow long term. Many of the future plans and goals would not be attainable at the previous location.”

I asked Steve Hall, co-founder of the Mustang Owner’s Museum, to clarify what this means, and to put to rest some of the rumors surrounding the surprise announcement.
“The main reason for the move was we could not afford to stay at the original site,” Hall said. “The smaller location, with a much lower expense, will allow us to develop new exhibits and programs. We will soon be taking over the third suite in the building, giving us the entire building, which will give us the space to display close to the same number of vehicles as the old location.”

The previous location, at 21 Carpenter Ct NW was a 42,000-square-foot facility. The new location, at 4005 Dearborn Place is located just across the street and has 15,000 square feet of space. According to Hall they will take over the third suite on site that will grow the museum space to approximately 22,000 square feet. Hall also said, “We have rented an additional 2,000 square feet off site for storage.”

I attended the Museum’s Grand Opening last year and liked a lot of things about the museum. Although part of the week-long celebration was disorganized, the passion for Mustang was evident. Enthusiasts came from all around the country and all around the world to see this museum. Many various Mustang Clubs donated money (through Charter memberships) to the museum to help get it off the ground. Many bought commemorative bricks in front of the museum. Hall said those bricks will be transported to the new location and are a key part of the Museum. So there is a real personal sense of ownership in this Museum from so many in the Mustang community. 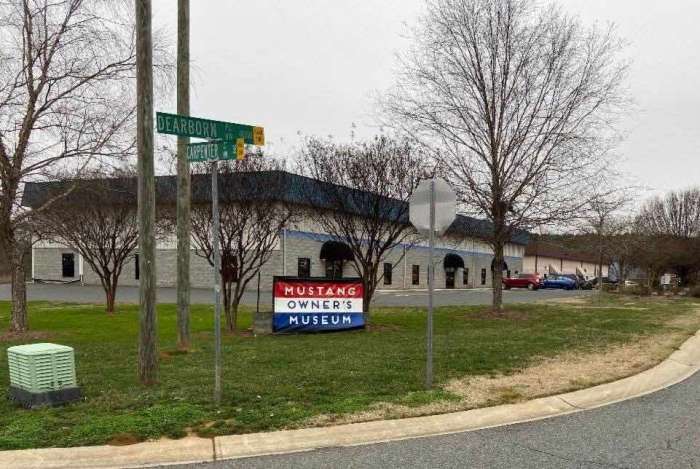 According to an article by Ford Performance the Museum: “(Was) Built through contributions from Mustang owners and clubs as well as those from private investors, the two-story, 42,000-square-foot facility is just down the road from the Charlotte Motor Speedway off Highway 29 in Concord, North Carolina, adjacent to the Dennis Carpenter Ford Restoration Parts complex. The Carpenter family is also a key contributor to the museum, which was not funded by the Mustang Club of America nor Ford Motor Company.”

With such community-wide financial support, many are confused why the museum seems to have already fallen into financial distress. As such, there’s a lot of disappointment to hear about the Museum changing locations just nine months after it opened.

I also carry that sentiment, but also caution people from spreading myths and rumors and to not give up on this project. When it was announced that the Museum would open in Concord, North Carolina there was consternation amongst many in the Mustang community. The location seemed odd, devoid of any Mustang heritage. Sure, it is close to the Charlotte Motor Speedway and near the NASCAR Museum, but the greater Charlotte area has no real tie or connection to the Mustang. Why not put it in or near Dearborn, where the Mustang was born? Those are unanswered questions at this point and honestly irrelevant at this point.

What’s Next For the Mustang Owner’s Museum?
It’s hard to determine what the future holds for this museum. This news is troubling for all of us who are passionate about Mustang. It’s difficult to get such a museum going, so I can say that now is not the time to abandon the Museum or give up on it. Conversely, Hall needs to do a better job of communicating with patrons and stakeholders and the Mustang community in general. Likewise, the community needs to give him the benefit of the doubt. This is your Museum and complaining about it on social media will not help the cause. We all want this museum to succeed!

Hall told me that the vehicles on display at the Museum will continue to be displayed and that there would be some change over of those vehicles in April. Hall also said that despite the change of location that many special events are still planned.

“In April we will host the 2020 National Mustang Day event, followed by events celebrating Roush, Shelby, Petty's Garage and RTR. We already have a number of Mustang club/group events planned, including next week's Mustang and Ford Cruise In,” Hall said.

They also have new hours of operation which are:

Wed.-Sat. 10 AM-5PM and Sunday 12-5PM, Monday and Tuesday closed (unless by appointment). Starting April 1, they will switch to summer hours, and be open seven days a week. General Admission is $10 but Charter Memberships and Individual Memberships are available.

Also, check out why the Mustang Owner's Museum wants to see your car.

See you in my latest story where I am discussing GM's consideration of Mach-E like Camaro, while Ford talks about Charger-like Mustang.

Bob Vaughan wrote on February 1, 2020 - 9:37am Permalink
Keep on keeping on, guys. There are many Mustangs owners who are with you and the Museum. Just renewed membership!!