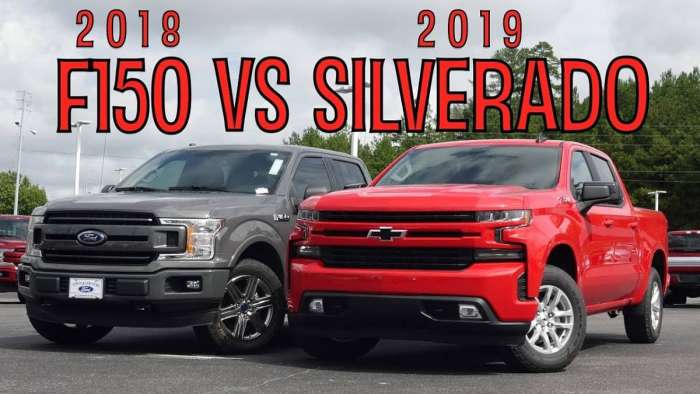 Ford vs. Chevy Rivalry Both Good and Bad for Industry

While the long-lasting rivalry between Ford and Chevrolet may generate funny memes and even family feuds, it has generated a lot of great cars and great trucks like the F-150 and Chevy Silverado through the years. This rivalry has shaped automotive history and continues to shape the landscape of today’s automotive industry.
Advertisement

I’m the type of person that loves a good rivalry, especially in the world of sports. And certainly rivalries have their place in the automotive world too. Heck, there was just a movie out called Ford vs. Ferrari, which was about the racing rivals of these two vastly different companies. But the rivalry I want to talk about is one of automotive legend. It’s Ford vs. Chevy, or even broader, Ford vs. General Motors.

Ford vs. Chevy Rivalry
This rivalry dates back to the early part of the 20th century, where the young visionary Henry Ford began revolutionizing the automotive world with the Model T. Around the same time General Motors had fired a man named Will Durant, who teamed up with a race car driver named Louis Chevrolet. Durant and Chevrolet were so successful, Durant was able to financially take over General Motors and incorporated the fledgling Chevrolet automotive brand into the General Motors company. This combination made them a legitimate rival to Henry Ford’s Ford Motor Company which was making Model T’s by the thousands and selling them as fast as he could make them.

By 1928, Chevrolet created a more-powerful engine for their car and was able to advertise it as such, sticking it to Ford and the Model T. And the rivalry was on!

After World War II the rivalry really amped up. The ’57 Chevy is a legendary vehicle and an all-time classic. But, did you know that the ’57 Ford outsold the Chevy that year? When Ford launched the Mustang it caught General Motors off guard. While they had the Corvette, they didn’t have a pony car to rival the Mustang, until they launched the Camaro in 1967.

Despite the tremendous financial success of the Mustang, GM won the decade in total sales volume to continue the rivalry. Back and forth these two automotive titans went through the decades and through an oil crisis. Make no mistake each car maker knew what the other was doing and vice versa. There were rumors that each had spies on the other companies’ payroll just to report back about what they working on.

Battle for the Truck Buck
The rivalry continues today. But the battle looms the largest in the truck world. In the full-size truck segment there’s F-150 vs. Silverado and Sierra. General Motors has re-engaged in the mid-size truck segment (after abandoning it 10 years prior) with the Chevy Colorado and GMC Canyon. Reacting to this re-emerging segment, Ford brought back the Ranger after a long hiatus to rival the Colorado and Canyon. It’s always a tit for tat it seems between these two. And the consumer, with more choices and more options, is the winner for sure. 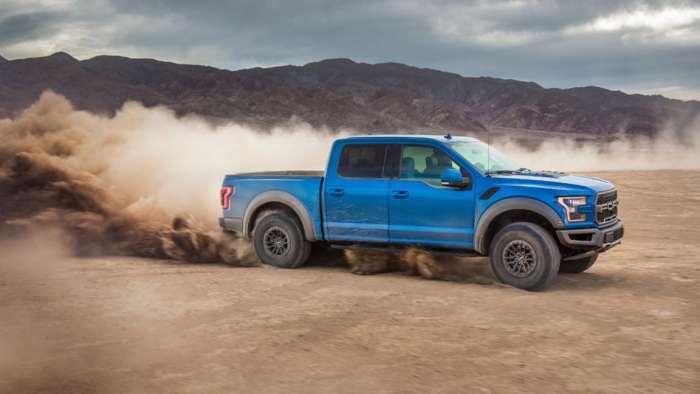 Is Ford Losing Its Hold on the Best-Selling Truck Title?
The F-150 continues to dominate full-size truck sales as the best-selling vehicle in America for 40 years. But when you combine GM’s two full-size truck brands (Silverado and Sierra) GM has actually outsold Ford for the third quarter of this fiscal year. That is something that is glossed over and lost in all the talking points and smack talk about which brand is better.

Is this a sign of the tide swinging back to General Motors? Will Ford lose its crown? For the year, Ford still has an 85,000+ unit lead over GM’s full-size truck brands. But the F-Series is down almost 3% for the 2019 year in sales volume. Likewise, Mustang sales are down a bit for the third quarter, but so are Camaro sales. Ford outsold the Camaro by more than 4,000 units in the third quarter.

Historically, Ford still leads the way in total volume for both the F-150/F-100 and the Mustang when compared to their General Motor rivals. So each brand has something to brag about for sure.

Fix Or Repair Daily
As an automotive journalist, I am supposed to remain unbiased. And sure, my coverage here at Torque News is heavy on Ford and I even have two national books out about Ford, but believe it or not, I don’t prefer one over the other. I don’t own a Ford or Chevy as a matter of fact. I’ve made great friends in the Ford truck and Ford Mustang communities thanks to my books, and they’re great people.

But, honestly, the endless Chevy bashing and the ridiculous memes becomes quite tiring. I don’t understand tearing down one brand to promote another. Common joke: Chevy is the best car you’ll ever push. Chevy guy responds: What does Ford stand for? Fix or Repair Daily or Found on Road Dead. Groan!! I get brand loyalty. It drives the automotive industry. Many automakers rely on such brand loyalty and market their vehicles with brand loyalists in mind. But there’s a slew of consumers who just want the best vehicle at the best price for their needs. That could be a Ford, it could be a Chevy, or it could be a foreign vehicle for that matter.

The automotive industry competition is stiff. Tougher than it’s ever been. Back when Ford and Chevy were trading punches there weren’t that many options. Now the market is flooded with possibilities – foreign and domestic. So, spare me the memes and stupid jokes and let’s focus on making the best vehicles for the best price with the most offerings. That’s what consumers want. Not some silly rivalry that’s good for internet memes, but not good for much else.

Mugs wrote on July 24, 2020 - 11:51pm Permalink
I have zero brand loyalty Grew up in a 100% GM household. Bought a Ford and it did me well. Ford's price point and lack of things I need in a half-ton have me eyeballing the Chevy once again.
Brian Mcdowell wrote on January 9, 2021 - 4:48pm Permalink
CHEVY TRUCKS FOR MANY YEARS BUT NO BRAND LOYALTY.I GO FOR PRICE ,CONDITION,AND MILEAGE OBVIOUSLY USED.CURRENTLY PAID 3K IN 2008 FOR 1996 ford F150 supercab 4×4.at 100k miles now 200k mileage with constant oil coolant filters changes.rebuilt front end and complete brakes.No major work.
Jimmy Dinsmore wrote on January 10, 2021 - 10:18am Permalink
I think the average consumer isn't mechanical and doesn't want to have to do even minor things like that. Thus, they upgrade and buy something new rather than do what you referenced to keep the life extended.
Richard4point6 wrote on August 28, 2020 - 4:24pm Permalink
Ford engineering superiority and eminently better quality control make the chouce a no brainer. Look at GM's abysmal frequency of repair stats and you will never touch a GM junker. GM is stuck in a world of pushrods and live rear axles. Their fit and finish are an embarrassment.
Harrison wrote on February 7, 2021 - 9:59am Permalink
You are so clueless. Look up real stats and see which brand puts out the cars that last the longest! Just a few yrs ago a corvette was donated to the corvette museum with 770k+ miles on it. Ford will never reach that feet unless it's a diesel.
Jimmy Dinsmore wrote on February 8, 2021 - 10:25am Permalink
What is clueless? This was nothing more than a test off the line and down a strip. Nothing about what was or wasn't better long term. I don't possess a crystal ball and that was never the point of this. I didn't even proclaim which one was "better" just which one won this race. Nothing more. Nothing less.
J West wrote on February 9, 2021 - 10:03am Permalink
The author states that he doesn't own a Ford or a Chevy. If he owns foreign vehicles and writes about American vehicles then he should move to Asia.
Anthony wrote on March 1, 2021 - 10:21am Permalink
I've worked for Ford and GM, actually all three (it was "Daimler/Chrysler" then.) I've owned ford and benz (80s diesels). I likely always will. I think all the tech nonsense to eek out increasingly small increases in efficiency mean NONE of the current cars (ice or ev) will be classics. I miss what was and am not a fan of where we're going. But I'll keep my last century stuff flying and hopefully will die before I'm forced to drive electric.
Brian Weir wrote on March 4, 2021 - 5:44pm Permalink
Did you know that 90 percent of all Big 3 trucks are still on the road? The rest all made it home.
Bobby Baker wrote on March 15, 2021 - 6:51pm Permalink
Chevy and GMC are appealing on the outside but look like 1970 cheap plastic on the inside which is where you'll be most of the time.If you like leisure suits in 2021 Chevy is your truck but if you want the comfort of your living room Ford is your truck!
Brian Weir wrote on March 19, 2021 - 11:06pm Permalink
GM has always been more of a marketing company than a vehicle manufacturer and it shows in their build quality. Not that Ford isn't guilty of the same sins, but not nearly on the same scale as General Motors.
William G Hadden wrote on March 21, 2021 - 7:49pm Permalink
Ford has had more recalls for major shit period, than Chevy ever had in Silverado. Ford is in the news every damn week with a f series recall. Chevrolet all the way for me.
Bill Malone wrote on March 21, 2021 - 2:12pm Permalink
First On Race Day