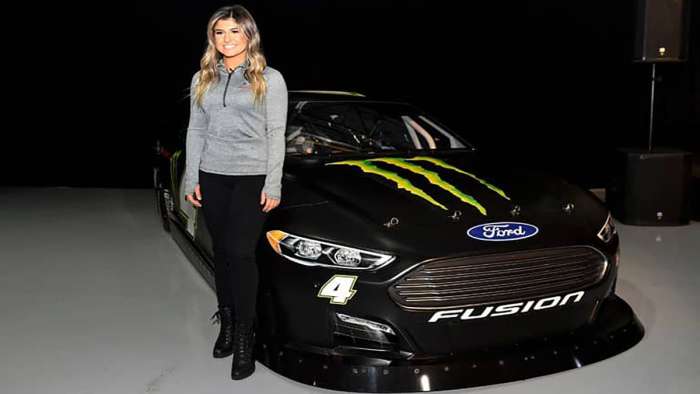 Hallie Deegan made history when she became the first female driver to win a race in the ARCA racing series in 2018. As such, Ford Performance has signed the teenager to a development contract and will put her behind the wheel of their cars, including the Mustang GT4.
Advertisement

Big things are happening at the Ford Performance Technical Center in Concord, NC. First Ford announced a complimentary track driving experience in the Mustang Shelby GT500 for those who purchase this super car. This will take place at their new track facility and program at the Charlotte Motor Speedway. Now Ford Performance announced that they were signing a teenage racing phenom to a development deal.

Hallie Deegan's Young Racing Career
Hallie Deegan, the first female driver to win an ARCA series race, is now driving for Ford. According to Ford Performance, Deegan, 18, will be competing in multiple series during the 2020 season as part of the DGR-Crosley race team, which announced it was moving to Ford Performance last week. She will run all 20 races in the ARCA Menards Series with that organization and also select events in the Mustang GT4 with Multimatic Motorsports in the IMSA Michelin Pilot Challenge.

“Hailie has shown in her brief time behind the wheel of a stock car that she’s got what it takes to be successful,” said Mark Rushbrook, global director, Ford Performance Motorsports. “Our goal is to put her on a path to realize our shared goal of winning championships and part of that is gaining experience on tracks such as road courses and superspeedways. We feel this year will serve as a good foundation for what lies ahead.”

The 18-year-old Deegan had three victories at the ARC Menards Series West (previously known as NASCAR K&N Series West). She also won twice and finished third in the final standings in that series. She’s considered a rising star in the world of racing. During this past season she won three poles, had eight top-five finishes and 11 top-10 finishes. She competed in the main ARCA Menards Series race at Lucas Oil Raceway and finished fifth. Deegan has a bright future and could become the face of Ford racing in the future.

Deegan said, “I could not be more excited to join Ford Performance and DGR-Crosley,” said Deegan. “It became clear quickly that I align with the Ford Performance vision of driver development and our shared drive to win. It is also extra special to get to race with Ford, a family company, that already had ties to my family. Growing up watching my dad race a Ford, and now to be able to do the same thing is very cool.

“It’s also important to me to be teamed up with a hardworking group such as DGR with like minded vision and goals,” continued Deegan. “We are all committed to work as hard as it takes to finish on top. I look forward to the upcoming season and learning as much as possible to get me closer to accomplishing my goals of winning races.”

Deegan has not driven for Ford before, but as she mentioned her father has plenty of Ford racing experience. According to Ford Performance, her father, Brian, drove a Ford Fiesta in the Global Rallycross Championship and won a gold medal in the Rallycross competition at X Games 17 in 2011. He has also driven a Ford Raptor as part of the Lucas Oil Off-Road Series.

“We are very excited to have Hailie join the Ford Performance Team,” said Rob Johnston, global marketing manager, Ford Performance. “She is a rising star in motorsports with a new and already large fan base that we are looking forward to engaging with through her talent and personality.”

Watch this video of Hallie driving a Mustang.

Driving a Ford Mustang at Daytona
Hailie Deegan is scheduled to make her debut behind the wheel of a Mustang GT4 at the upcoming IMSA Roar Before the 24 test session at Daytona International Speedway on January 3, 2020. That will serve as preparation for her first event, which will be in the Michelin Pilot Challenge opener at Daytona on Friday, Jan. 24, 2020, where she will partner with fellow Ford Performance development driver Chase Briscoe.

It's exciting for Ford to latch onto someone like Deegan. As a young female, she could be a role model for other young women to get excited about racing and bring excitement about Ford's entire product line. I previously wrote about another female who’s enthusiasm for the Blue Oval is inspiring. Without a doubt we need more women involved and excited in the industry, whether that’s on the racing side, like Deegan or on the heritage side, like Mustang Marie.