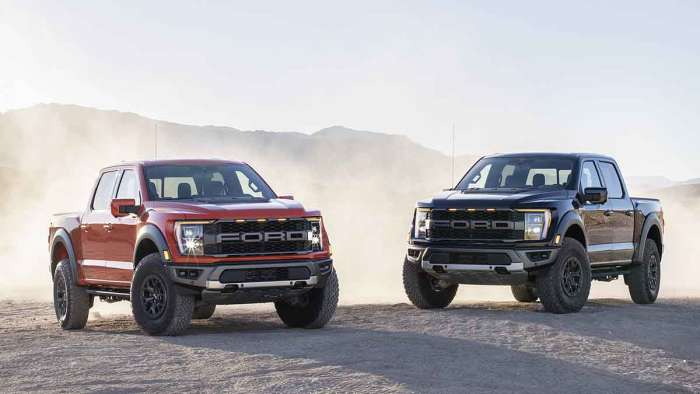 Lacking a V8 option, Ford focuses on low-end torque in the 2021 Raptor, increased towing and payload and throatier engine. Ford does say a Raptor R will follow next year with V8 engine. Pro On Board Generator option to be offered.
Advertisement

When Ford debuted the Raptor pickup truck in 2009 it brought a lot of excitement to the pickup truck enthusiasts. A pickup truck that could handle itself over any terrain and also jump and catch air was exciting.

Today, Ford revealed the third-generation Ford Raptor. It’s a great time for Ford to show off their “OG Desert Predator.” In the middle of launching the 14th generation F-150 and also slowly building and promoting the Ford Bronco, the excitement, zest and enthusiasm for trucks that can do anything is incredibly high.

The 2021 Ford Raptor will be available this summer, according to Ford.

And of course one of Ford’s biggest rivals, the Ram TRX has blatantly shown off its prowess including featuring the image of a T-Rex eating a smaller velociraptor on the engine bay. This is a not-so-veiled reference to the TRX being more capable and faster than the Raptor. 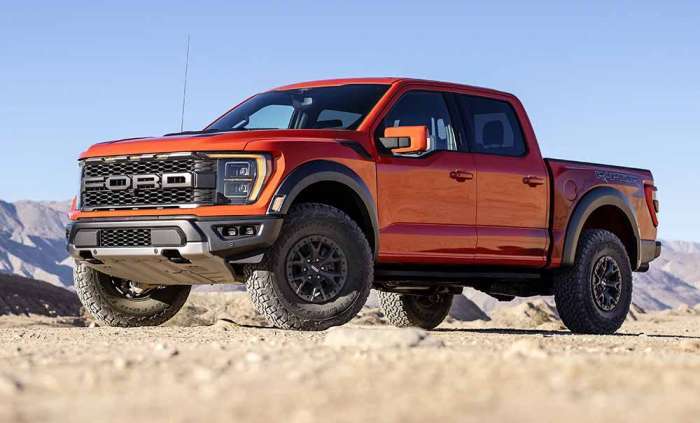 Ford did not release horsepower or torque for the new 2021 Raptor, which seems problematic and advantageous for Ram. However, we do know that the Raptor will have a 3.5-liter High Output EcoBoost engine. Ford says the upgraded, twin-turbocharged 3.5-liter EcoBoost V6 features upgraded turbos, a high-pressure exhaust gas recirculation system and 10.5:1 compression ratio. It delivers its torque lower in the rev range compared to the previous-generation Raptor, giving customers more power out of the gate. And the high-output 3.5-liter EcoBoost engine delivers better low-end torque, enables greater maximum towing and increased maximum payload capability, a 500-mile-plus range, plus class-first active valve dual exhaust offers throatier engine sound.

According to Ford, the 2021 Raptor takes the mechanical and technical brilliance and precision of Raptor and infuses it with enhanced connected technology that means the experience of owning one will only improve over time. 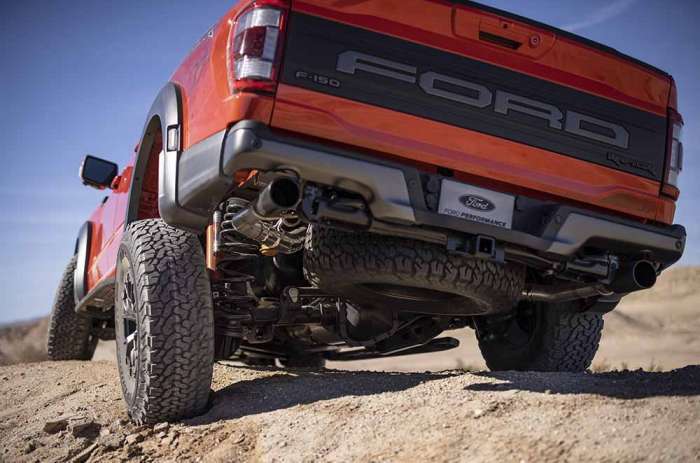 “Raptor is rooted in Baja 1000 racing, and its suspension advances our capability and performance – a five link rear setup with more wheel travel than any Raptor before it,” said Carl Widman, Ford Performance chief engineer. “And like a trophy truck, every aspect of Raptor has been engineered to deliver precision capability when your foot is flat on the floor, way out in the middle of nowhere roaring across the desert.” 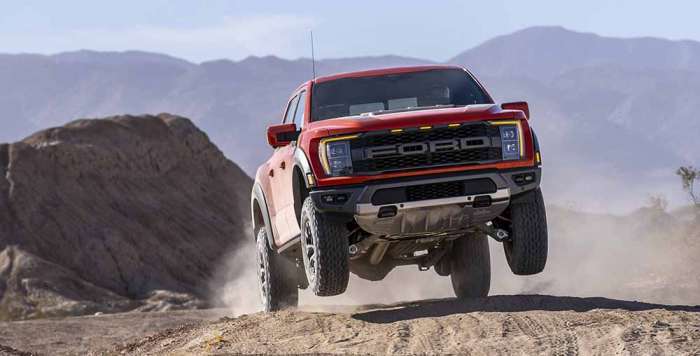 According to Ford, the five-link rear suspension features extra-long trailing arms to better maintain axle position on rough terrain, a Panhard rod and 24-inch coil springs – the longest in the class. The suspension design combined with more sophisticated engine management software means the truck can put more torque to the rear wheels for quicker starts off the line, faster acceleration and better throttle responsiveness while simultaneously delivering comfort, stability, handling, control and traction at speed. 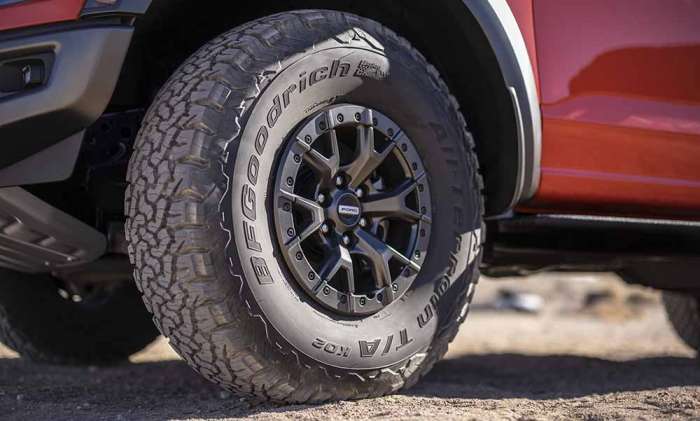 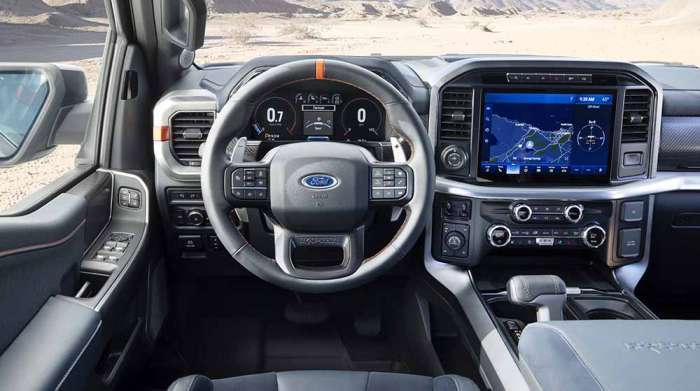 2021 Ford Raptor Gets Newest Technology
The 2021 Raptor will get some of the newest technology that Ford has revealed in their latest vehicles including over-the-air updates, Sync 4, 1-Pedal Driving, and Pro On Board Generator. Ford says the new Raptor will be the most technologically advanced Raptor ever.

Here’s some of the technology features offered in the third-generation Raptor.

Over-the air updates offer the potential for an even smarter Raptor with more capabilities in thefuture; possible upgrades like trail maps plus Trail Turn Assist could add even more off-road capability.

Customers can control their Raptor with FordPass – a mobile app that can lock orunlock their vehicle from almost anywhere, check tire pressure and fuel level, and allow control of new truck-focused features like Zone Lighting, Trailer Theft Alert, Trailer Light Check and available Pro Power Onboard. Over-the-air updates could evolve FordPass to include unique functionality for trips into the wild. 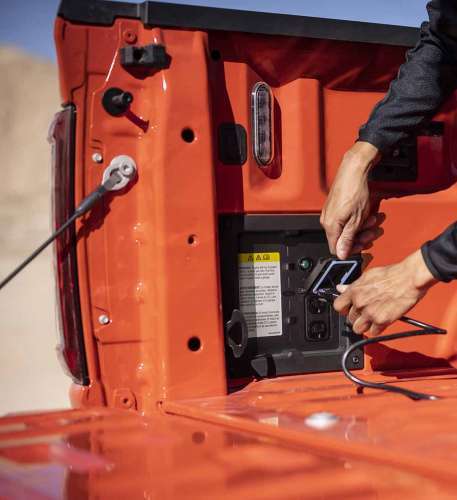 Ford’s Pro Onboard generator that has debuted in the 2021 Ford F-150 will be an option in the 2021 Raptor. I will have an extensive story and review of the generator in the PowerBoost hybrid F-150. But Raptor can be ordered with an available 2.0 kilowatts of exportable output to run power tools, camp lights and other equipment, providing more exportable power than any light-duty full-size pickup competitor.

Standard Trail 1-Pedal Drive helps make extreme off-road driving like rock crawling easier. In harsh trail situations, a driver typically must use both pedals, modulating throttle and brake simultaneously to advance the truck. Trail 1-Pedal Drive simplifies all that, combining those operations into activating just the throttle – press to move forward, release to brake. The truckapplies the brakes proportionally as the driver lifts from the accelerator.

F-150 Raptor also comes with standard Trail Control, which operates like cruise control for off -road use. Drivers simply select a set speed and the truck manages throttle and braking to allow them to focus on steering through challenging off-road conditions.

The Raptor will also have Ford’s new Sync 4 system which includes wireless Apple CarPlay. Be sure to check out my story on this new system as I review it in the 2021 Ford F-150. 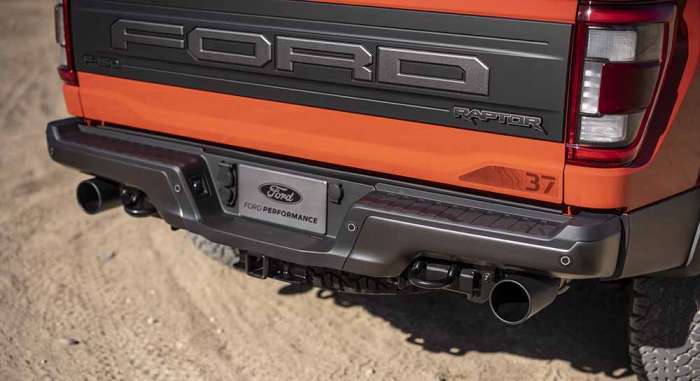 Initial Thoughts On 2021 Ford Raptor
I have not been shy about my love the second-generation Raptor. Even without a V8, I felt it was the best truck I’ve ever driven. I do think Ford will take some PR hits by not releasing the horsepower or torque of the High-Output EcoBoost engine of this new Raptor.

And of course the “trucks must have a V8” crowd will be vocal and the Moparians will scream the TRX is better because of its monster horsepower. Anyone who drives knows that a vehicle’s performance is not all about the horsepower and torque. There are many more factors to consider and it seems Ford has given thought to that with a new suspension and new wheels.

As for it being loaded with technology, I’m always a big fan of new technology. I’m not sure Raptor consumers care as much. Also, playing up additional towing and payload might work for a standard F-150, but I’m curious how important that is for the Raptor consumer.

So, let’s hear your thoughts. I’m waiting for the disappointment to be voiced regarding the lack of a V8. Many of us thought for sure there would be a V8 now. We will have to wait until 2022 for the Raptor R. Sadly, this is the world of the auto industry now as we head toward a greener, cleaner industry. Like it or not, it’s coming.

DeanMcManis wrote on February 4, 2021 - 5:50pm Permalink
Yeah, I was kinda puzzled why they didn't list the HP of their refreshed beast. The new rear suspension should help with ride quality and control on the road as well as off road. And the bigger tires are..bigger. But you know that Ford doesn't want to mess with a good thing, so steady evolution is a safe path.
Jimmy Dinsmore wrote on February 5, 2021 - 10:28am Permalink
The moment I saw no HP mention I knew Ford was trying to skirt the issue.
David wrote on February 4, 2021 - 7:26pm Permalink
This may be fine for some But look beyond the year or so after you have driven this beast Those tires, they don't tell you how much it will cost you to replace them A simple guess of 500 each or possibly more and with every replacement, your spending 4 times that. And you have to wonder if they will be using soft rubber for faster wear.
Jimmy Dinsmore wrote on February 5, 2021 - 10:29am Permalink
Cost of tires are EXPENSIVE for sure.
Codi Hutchings wrote on February 6, 2021 - 3:06pm Permalink
Cost of tires is a simple google away, and disproving you is very easy. Around $350 a tire. If you don’t want the extra cost of buying bigger tires, this vehicle is not for you obviously. For some people, the suspension benefits of having bigger tires, and easy of getting over certain obstacles is worth the extra money for those tires.