The hybrid PowerBoost powertrain is the most powerful F-150 in the 2021 model class. 2021 Ford F-150 with PowerBoost also offers best fuel economy plus capable on-board generator. All this adds up to stuff that matters most for truck owners.
Advertisement

Often perception is a reality. And sometimes, you can actually realize that a perception is a misconception. And I believe that will be the case for the 2021 Ford F-150 hybrid.

When I write about hybrids or electric vehicles (Mustang Mach-E or all-electric F-150), I get met with a lot of pushback and skepticism. People (wrongly) associate hybrids with pokey little vehicles like Prius.

That’s why I wrote several months ago that the 2021 Ford F-150 hybrid would not be Prius-like. And boy was I right. Now, here I am writing again to explain why the first-ever hybrid truck from Ford just might end up being the best variant of the entire 14th-generation.

On Twitter, I saw Ford PR guru Mike Levine tweet out the same type of sentiment. Of course he’s paid to be positive, but nevertheless his tweet made a lot a sense that might show why the hybrid F-150 could have quite an impact on the industry and certainly have huge ramifications for the Ford Motor Company.

He also went on to retweet a first-drive review from CNET that made a very bold claim about the hybrid F-150. See that retweet below:

I circled back with Levine to confirm the number I heard regarding the expected number of sales for the hybrid F-150. Levine said they expected around 10 percent of all orders to include the PowerBoost technology. That number seemed low to me and I am willing to be that, maybe not after year one, but before the end of the 14th-generation life cycle that the PowerBoost option will be second only to the EcoBoost, even outselling the V8.

That’s a bold statement. And it gives credence to what the CNET reviewer was saying too. The PowerBoost technology brings a lot to the table that truck buyers want without any downfall. Of course there’s the old-school mentality that the V8 sounds better. And you can’t argue with that. Viscerally, the V8 F-150 will sound better, but outside that, what is the downside to the hybrid F-150? How much does the 2021 hybrid F-150 cost?
To add the PowerBoost hybrid engine, it costs $1,900 more than the V6 EcoBoost. But as Levine tweeted out, those costs can be easily be recouped over the life of the truck.
And for another $750 you can add a 7.2kW on-board generator to any of the hybrid trucks. That power and performance of the generator adds value as it offers enough power to run a construction site or power all of your essentials when tailgate.

The thing Ford did right with the PowerBoost is offer it on all trims, rather than just the higher-end trims. Winning over the more basic truck consumer will be vital to help change that perception or misconception. 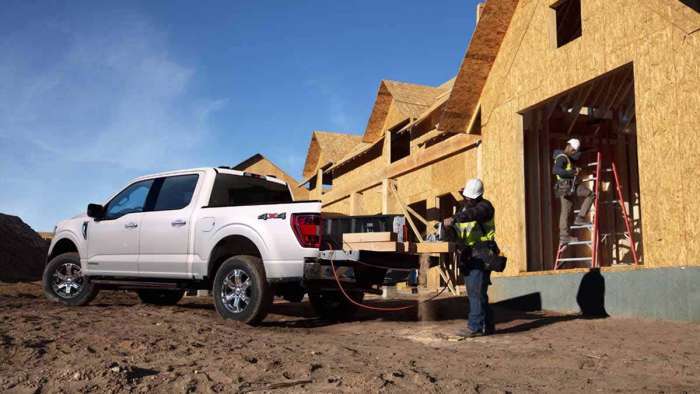 How much can the 2021 Ford F-150 hybrid tow?
As superlative, in many ways, as the PowerBoost F-150 is, it does fall off a little in towing capability. This is thanks in part to the extra weight of the hybrid battery and powertrain.

Ford claims that a 4x4 SuperCrew with PowerBoost can tow an impressive 12,400 pounds. This is less, of course, than 13,900 pounds of the non-hybrid.

Likewise the payload for the hybrid is less than that of its non-hybrid variant with a total payload rating of 1,830 pounds, compared to 2,100 pounds for the EcoBoost.

So if raw towing is your sole reason for an F-150, then perhaps the hybrid isn’t for you and that certainly is one area that hurts the aforementioned perception of the PowerBoost. Since Ford sold 900,000 units of the F-150 last year, if the hybrid F-150 achieves the expected 10 percent that would be 90,000 hybrid F-150s on the road. That’s certainly a start. I do believe that while the first orders and pre-orders may not be high for the PowerBoost that one these trucks hit the car lots and people actually test drive they will be pleasantly surprised.

For this reason, I do think the PowerBoost F-150 will win over many die-hard F-150 fans and perhaps even draw in younger consumers. And with an uncertain EPA future with a change in the Presidency, who knows what the environmental fallout will be. As such, it would be wise to start giving consideration to hybrid and even electric technology, even in the truck world.

V8s aren’t going away, but there’s a new contender on the horizon and it’s a legitimate contender to woo and wow truck buyers. If only you’d give it chance.

What do you think about a hybrid F-150? Is it a real truck in your mind? Leave me your comment below.