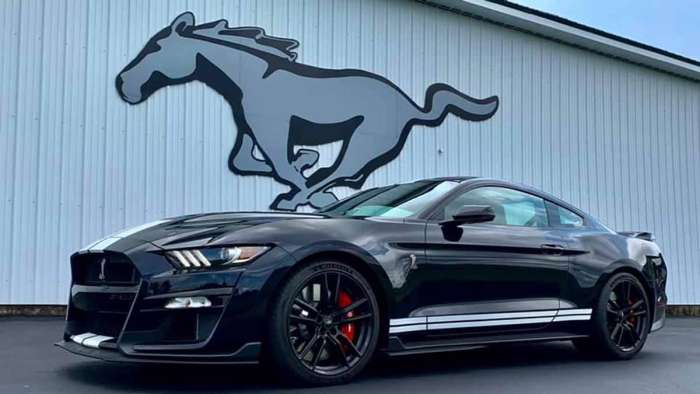 Supercharged V8 steals the show and wins over the hearts of Mustang enthusiasts. 2021 Shelby GT500 Cobra Mustang is a memorable muscle car that’s sure to hold its value and become a collector car.
Advertisement

This was one of those weeks as I had two very special cars to drive. More on the other car later this week here at Torque News. For now, let’s focus on the very memorable 2021 Shelby GT500.

I was set to speak before a couple of Mustang Clubs to promote my book Mustang by Design (available on Amazon). My speaking engagement was at the Halderman Barn Museum, which is a Mecca for many Mustang clubs in the Midwest. This time, I would arrive in style.

I asked Ford if they had anything special for me to drive to the event, hoping they’d put me in the brand-new Bronco. They didn’t have the new Bronco available yet for me, but instead they offered me up the Shelby GT500.

What a consolation prize that was! To be honest, there was no more apropos vehicle to drive to this museum devoted to design of the Ford Mustang. My friend Gale Halderman, who passed away last year, would have loved everything about this car. He was certainly there with me in spirit at his museum that he started.

As I pulled into the parking lot of the museum I was greeted by several tried-and-true Ford and Mustang enthusiasts. While some were happy to see me, they were more excited to see the Shelby. I wasn’t offended to be second fiddle.

So, one by one, I gave several of them thrill rides in this supercharged V8 muscle car. The throaty tune of the Shelby rumbled up and down the country road hitting many miles per hour in very few seconds (I ought not say just how fast). But let’s just say it was loud, fast and awesome for each and every ride I provided.

This was the Mustang of all Mustangs at this event, which had pony cars dating back to the origins in 1965 through Fox Body styles to the modern era. But all the owners of those beloved pony cars were still quite interested in this Shelby. And for good reason.

Let’s take a closer look at some of the highlights. 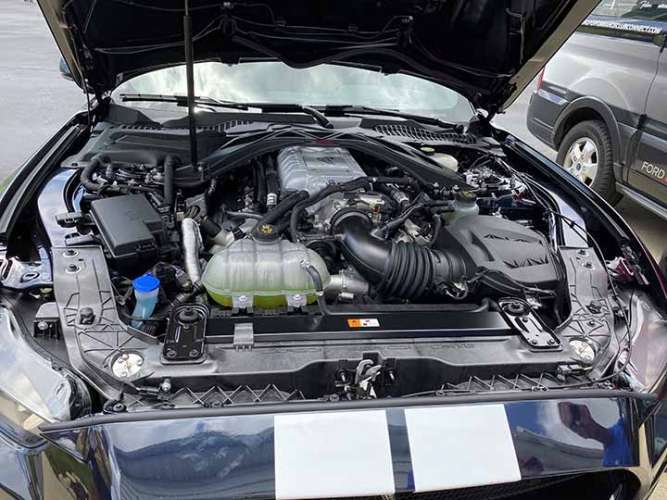 Last week I wrote an ode to the supercharged V8 engine with this Shelby as my muse. Sure the flat-plane 5.2-liter V8 engine in the now discontinued Shelby GT350 and GT350R may sound a little better to some ears, the Supercharged V8 in the GT500 is like a growling, aggressive symphony.

Every rev and even many of the downshifts released loud, beautiful noises that can only be affiliated with Ford and Shelby.

When I told people that the engine made 760 horsepower and 625 lb./ft. of torque stock they couldn’t believe it. That’s Ford engineering. Each engine is hand built, with the name of the person who assembled it mounted on the engine. 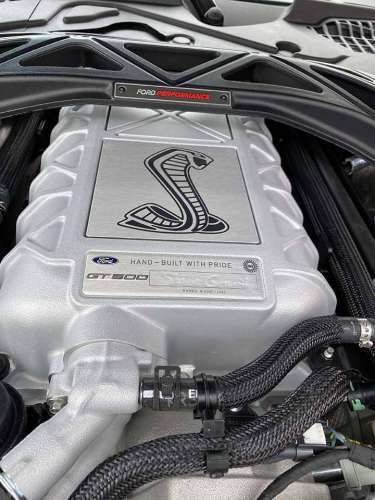 After my speech about Gale Halderman and the Ford Mustang and his legacy, I went out to the GT500 with a crowd around me and popped the hood open and let everyone marvel at this fine piece of American engineering. Of course they wanted me to fire it up and I happily obliged.

With the GT350s discontinued, the GT500 is the last remaining Shelby affiliation for the Mustang. 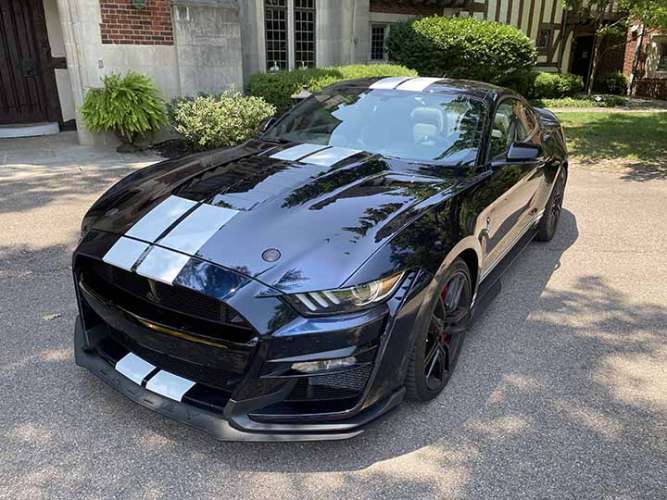 Seven-speed Tremec dual clutch transmission
On a Mustang Facebook group I belong to, many of the hard-core Mustang purists were proclaiming that manual transmissions were the way to go for “real” Mustangs. My answer to them was, you need to experience the seven-speed dual clutch automatic transmission (DCT) in this Shelby GT500.

I’ve driven hundreds if not thousands of cars over my journalistic career and this is the single-best transmission I’ve ever experienced. That’s not hyperbole.

There are paddle shifters available for those who want to be engaged in driving, but if you can’t stay engaged with the performance of this Shelby, well maybe you aren’t meant to drive one then. 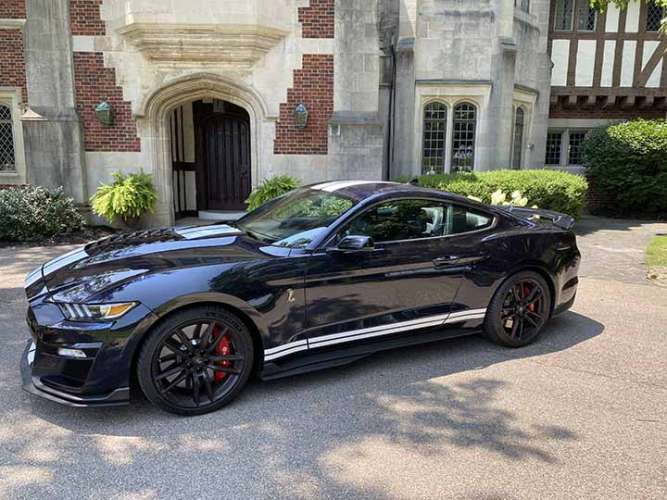 How much does the Shelby GT500 cost?
The “sticker” price of my tester was $78,470. However these cars are going for much more than that, as I’ve seen some selling for six figures.

The Shelby GT500 is one of the rare cars that you can truly call an investment. It will hold its value throughout the years. With the GT350 discontinued, that will only help the value even more. 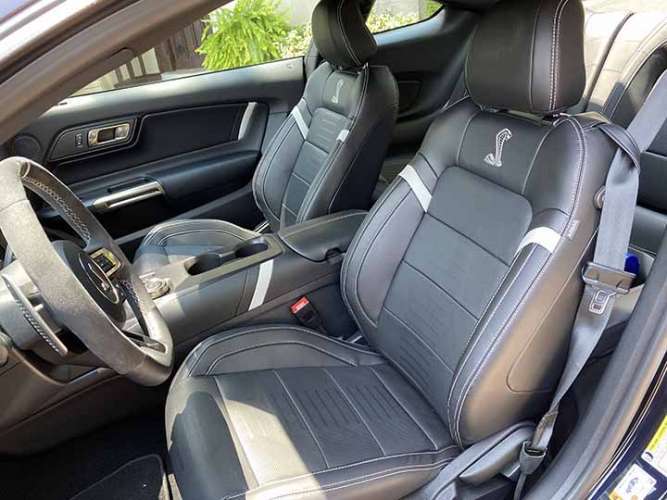 Shelby styling
My tester was in one of the new colors offered by Ford – antimatter blue. It almost looked black, but when the light hits it you can see the dark blue tint. With the typical white striping associated with a Shelby on the hood and spanning the middle of the car it had a lot of sex appeal.

White vinyl striping near the bottom completes the look ($325 upcharge).

Inside, the Cobra logo was prominently displayed on the seats and the steering wheel letting you know this was special. An individual plaque on the glove box shows that this really is a collector’s car.

Suede-like material covered the steering wheel giving it such a great feel as you hold onto all those horses while that Cobra stares ready to strike at any given time. 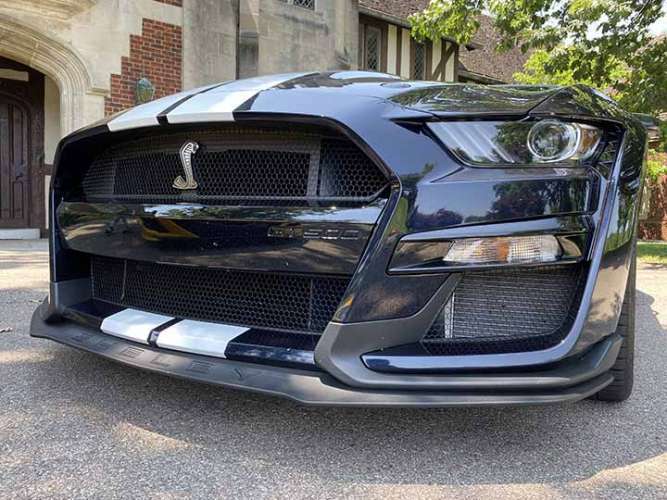 Final thoughts on Shelby GT500
As a Mustang historian I get into discussions/debates with enthusiasts over what is and what isn’t a Mustang. It’s quite tiresome. A Mustang is whatever Ford says it is at this point.

Nobody can argue that the Shelby GT500 is as Mustang of a Mustang as you can find today. It encompasses everything you’d ever want from a muscle car. It’s the total package with looks and power to offer a car that’s fun, fast, aggressive and will always be fun to drive. What more could you want from a Mustang?

What do you think about this GT500? Leave me your comment below.

DeanMcManis wrote on July 20, 2021 - 4:11am Permalink
Back with the earlier model GT500s they were really more positioned as "luxury" Mustangs, but it seems like Ford applied what they learned in building the GT350 and Ford GT supercar when they designed new GT500. With the GT500 so well balanced in it's performance, I think that it will be very difficult trying to justify spending more money for a dramatically tuned version of the car. Thanks for the GT500 review and impressions.
Jimmy Dinsmore wrote on July 20, 2021 - 11:13am Permalink
Dean thanks for the feedback. However, I do believe this car retains its value through the years. It's underplaying it to call a tuned version because it's so perfectly engineered. It's truly amazing. In the same ilk as the C8 Corvette as far as performance versus value.
DeanMcManis wrote on July 21, 2021 - 4:35am Permalink
I guess I didn't express myself well here. My point was that Ford themselves did such a good job with the GT500 that there is little point in spending the extra money to buy tuner models like Saleen, Roush, and Hennessey.
Jimmy Dinsmore wrote on July 21, 2021 - 3:57pm Permalink
Then yes, I agree with you completely with you!
Ed Pace wrote on July 22, 2021 - 1:44pm Permalink
I purchased a fully optioned 2020 GT500 with the track package and all I can say is this is one amazing machine and I have driven many vehicles. The vehicle reviewed is a base model and does not have the added benefit of the Recaro seats, improved suspension, more down force, better grip with the Pilot Sport Cup 2s and, less unsprung weight with the carbon fiber wheels (one of only several vehicles on the market available with this option and most cost $300K+). I recently had the opportunity to drive the base GT500 at Charlotte Motor Speedway and ZMax drag strip all I can say is this vehicle was built to track and it loves it! We drove the daylights out of their vehicles all day long in 90 degree heat and not one of the vehicles had an issue with overheating or brake fade. An amazing value for the money regardless how you drive this vehicle.
Jimmy Dinsmore wrote on July 23, 2021 - 2:06pm Permalink
Yes. Value is a great word for it.
Kevin wrote on August 9, 2021 - 11:04pm Permalink
I bought a 2021 GT500. (performance blue, Recaro's, track/tech package. vinyl black stripes) It's simply an amazing car. It's my 4th Mustang. I always hated automatic tranny's til this DCT. It's unreal, so good. The engine, hah!, makes you laugh every time its so damn powerful. Turns like an F1 car. Drag strip or just in quiet mode to pick up the kids. One happy customer. Zero buyers remorse. Sears Point track day is Wednesday. God Bless Carroll Shelby and Ford Performance. I feel like this is the last one of the ICE era. Well done.
Jimmy Dinsmore wrote on August 10, 2021 - 10:18am Permalink
Agreed. This car is SPECIAL and that transmission will convert everyone, even the MT snobs.

Tesla Contemplates A New Strategy for China Retail even As Sales Boom
Jay Leno on Elon Musk & EVs: “I Think He Should Get ... Credit"
END_OF_DOCUMENT_TOKEN_TO_BE_REPLACED