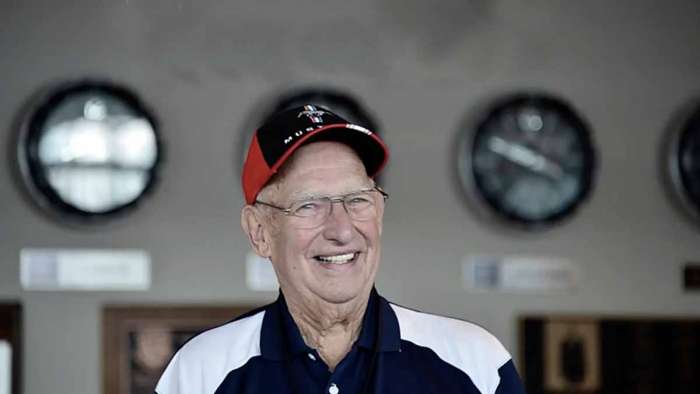 Principle designer of original Ford Mustang passed away a year ago, but his memory lives on in the iconic car and in the Mustang clubs that cherish him. His Museum in Ohio continues to be a destination for Mustang enthusiasts and a way to honor his 40-year career at Ford Motor Company.
Advertisement

Today is April 29. I should be writing something fun about the 429 Boss engine, similar to what I wrote yesterday (on 4-28) about the Cobra Jet engine. But today’s date will always be a more somber one for me and other Mustang enthusiasts.

One year ago today, I lost my friend Gale Halderman, the principle designer of the original Ford Mustang. The Mustang world lost their friend and a Mustang Hall of Famer. I am so glad to have developed such a close relationship with Gale and his family, especially his daughter Karen and granddaughter Lauren.

And of course, I co-authored Gale’s biography, Mustang by Design, with his first cousin Jim Halderman. 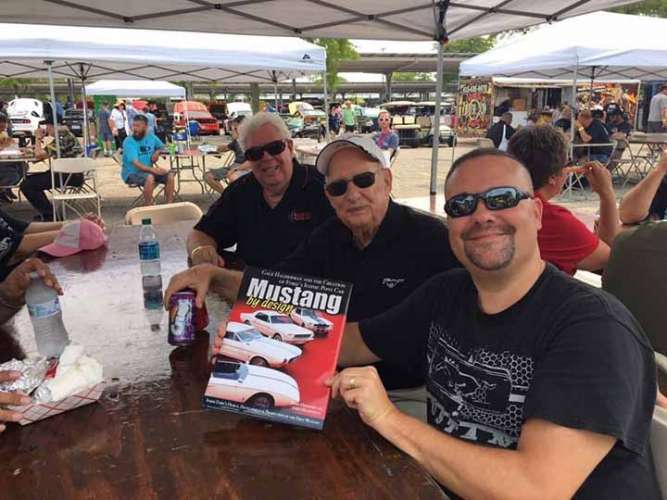 So on this one-year anniversary of Gale’s passing, I wanted to do a tribute to Gale and some of his stories. I’m always honored to travel to Mustang club events and speak about Gale, tell stories, and sign copies of Mustang by Design. If you ever met Gale, he always had a smile on his face.

His passion for Mustang showed in all of his stories. And what amazing stories Gale had.

Related Story: Hundreds turn out to pay tribute to the late Gale Halderman.

Who else can say that they had a close relationship with such iconic names such as Lee Iacocca, Hal Sperlich, Carroll Shelby, Henry Ford II and Bill Ford Jr? Gale can, after working 40 years at the Ford Motor Company in the design studio. 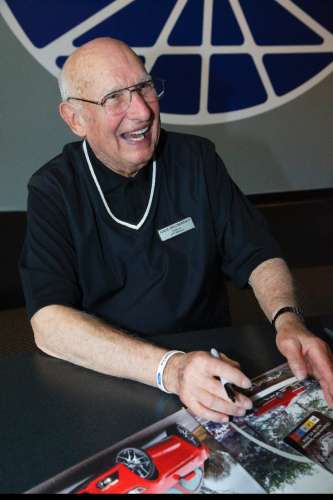 Gale Halderman’s Mustang legacy
As mentioned, Gale is the designer of the original Ford Mustang. It was his sketch that was chosen by Lee Iacocca to become the legendary 1965 Ford Mustang. His sketch, that he drew on his kitchen table in the middle of the night, become the most iconic car in American automotive history.

Every time I see a Mustang, whether it’s a first generation (the best in my opinion), a Mustang II, a Fox Body or even any of the current era Mustangs, I can see at least something that Gale contributed. His legacy rolls down the streets and has so for 57 years.

The three tail light slashes were one of Gale’s concept. That design has been on so many Mustangs over the last 57 years, that it always make me think of Gale when I see it. To me, that’s one of the features that epitomizes the Mustang.

And yes, it warmed my heart to see that tail light design on the 2021 Mustang Mach-E, a vehicle that Gale saw in clay several years ago when he was visiting Dearborn, and liked what he saw, by the way. 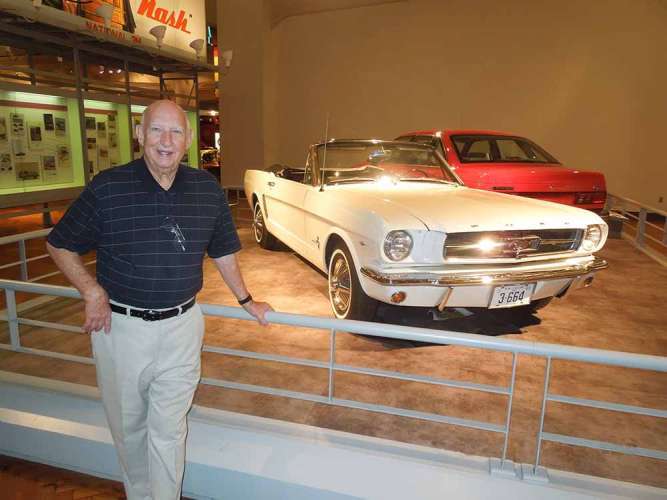 Ford Should Find A Way To Honor Gale
When Gale passed, Ford issued a pleasant, but too-short response about Gale’s passing. I realize that Ford has had many extraordinary employees throughout its rich history, but it would be great if Ford would honor Gale in some way.

Produce a tribute Mustang or name a wing after him at the design studio, although Ford demolished the Ford Product Development Center which was a huge part of FoMoCo’s history. To be honest, Gale would be disheartened to have learned that Ford just tore down this building and didn’t turn it into some kind of museum or historical marker.

I wish Ford had kept it intact and perhaps named it after Gale. He would’ve liked that.

One of my biggest criticisms of Ford Motor Company is that they don’t often celebrate and honor their rich history enough. They have many cherished and iconic names who have worked for them, and yet they fall short in properly honoring them.

I would argue that above all other American car manufacturers Ford Motor Company has had more iconic names employed there than any other company.

Gale is a member of the Mustang Club of America’s Hall of Fame, a distinction he was quite proud of, but perhaps Ford should go further and do a display at the Henry Ford Museum at least honoring Gale. Perhaps a plaque or something near the display of the VIN1 Mustang that resides there. 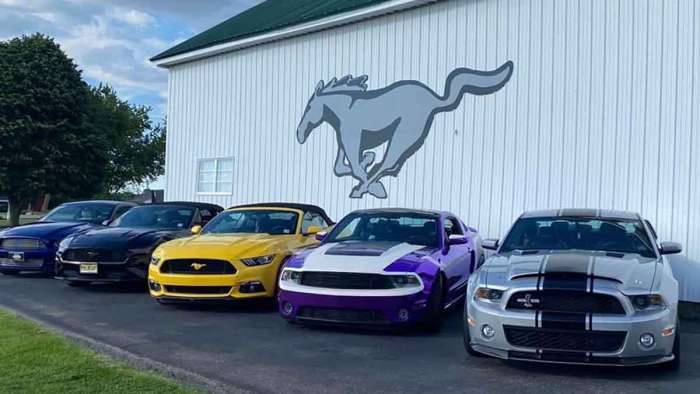 This isn’t a car museum like so many others, but is rather a memorabilia with a focus on car design. Gale collected some of his sketches, but many of the sketches from the talented designers that worked for him through the years.

Those works of art are displayed at the Halderman Barn Museum, along with photos, and several cars. Gale’s daughter Karen and granddaughter Lauren have kept the museum going since Gale’s passing.

There's also that giant Mustang logo on the side of the barn that makes for the perfect backdrop for a photo of your Mustang. 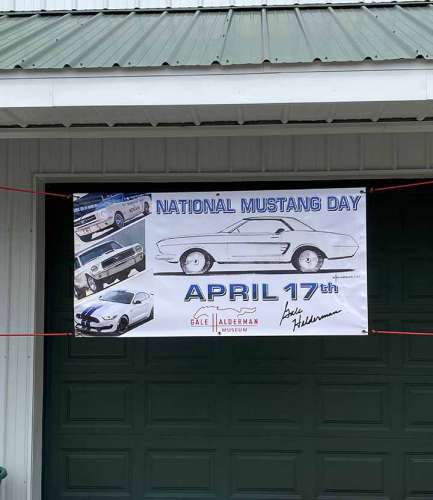 The Museum is a destination for many car clubs and is open for visitors by visiting their Facebook page. I’ve appeared there many times and the last time on National Mustang Day, with a large crowd from three different states.

It was sad without Gale there. But it was also inspiring to see his legacy continuing with so many in attendance during National Mustang Day. I was happy to talk about the book and talk about Gale and his impact on the Mustang. In retrospect, Gale’s presence was there with everyone and his spirit will continue to live on.

If you’ve never visited the Halderman Barn Museum, I highly encourage a visit. It truly is a mecca for Ford and Mustang enthusiasts. You’ll see Gale’s impact all around, and there’s even a life-size cardboard cutout of Gale with his sweet, warm smile that he was known for. 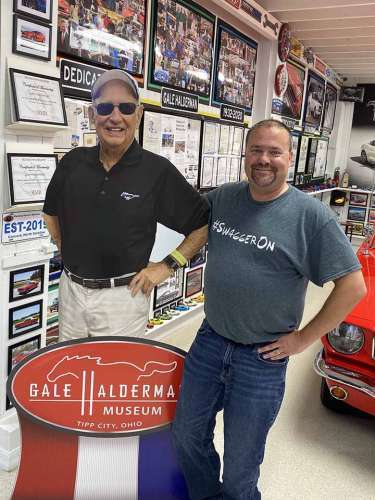 If you ever met Gale, I’d love to hear the story. Leave your comment below, or leave me your favorite Mustang story, as everyone has at least one.

Doug Smith wrote on April 29, 2021 - 1:26pm Permalink
I met Mr. Halderman 2-3 years ago at a Ford All Power show. He was like everyone's Grandpa. He graciously signed my 2018 GT Premium. Very sweet guy. Such an honor to get to meet and speak with him.
Jimmy Dinsmore wrote on April 30, 2021 - 8:09am Permalink
Thank you for sharing the memory.
Sandra Campbell... wrote on April 30, 2021 - 5:07pm Permalink
I know Gales Family misses him! He did a assume thing when he created this Mustang Barn! My Dad and Gale all grew up together! My Dad Richard enjoyed hanging with Gale when my Mom passed! Thanks to you and whoever’s keeping the Mustang ventures going!! I even enjoyed it the few times I saw it all!
Jimmy Dinsmore wrote on May 1, 2021 - 9:41am Permalink
Thank you for sharing your memory!
Gary Allen wrote on May 3, 2021 - 11:42am Permalink
Stopped by the Barn several times with my daughter, to get his autograph. Brought a 64 Indy Pace Car diecast car. He said he did the design and painted the logo on a Mustang. And that 3M did the decals from that. So glad I brought that car. A true gentelman and loved to talk to people.