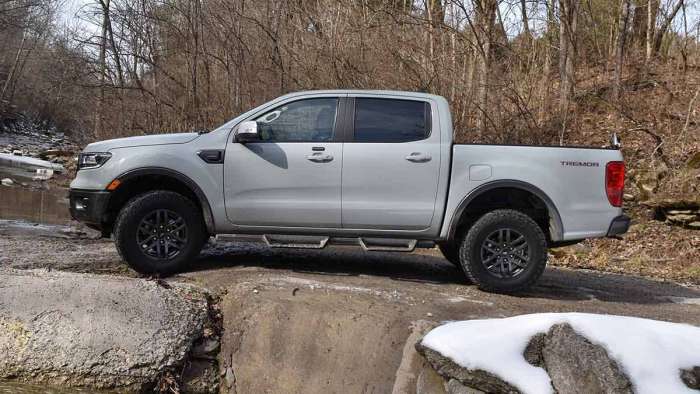 2021 Ford Ranger Tremor makes a case to be considered along with Raptor and Bronco when it comes to off-road ruggedness. Tremor package is new for Ranger in 2021 as Ford expands Tremor across entire truck line.
Advertisement

We broke the news here at Torque News that Ford was bringing the Tremor Package to the new generation Ford F-150. Ford has already added the Tremor Off-Road Package (code 91T) to the Super Duty and the Ranger.

I reviewed the Super Duty with the Tremor Package (and that awesome Godzilla engine) earlier this year and absolutely loved it. So I was thrilled to get some time behind the wheel of the 2021 Ford Ranger Tremor.

The Ranger Tremor is expected to show up at dealerships in the next couple of weeks.

My first impression of the Ranger Tremor was a good one. First, the color made me quite happy as my tester was Cactus Gray. This is the same color that many new Bronco Sports and upcoming Bronco two-door and four-doors will have. This is not a dull, boring silver/gray, but rather a nearly steely blue, with a little dullness and matte appearance. 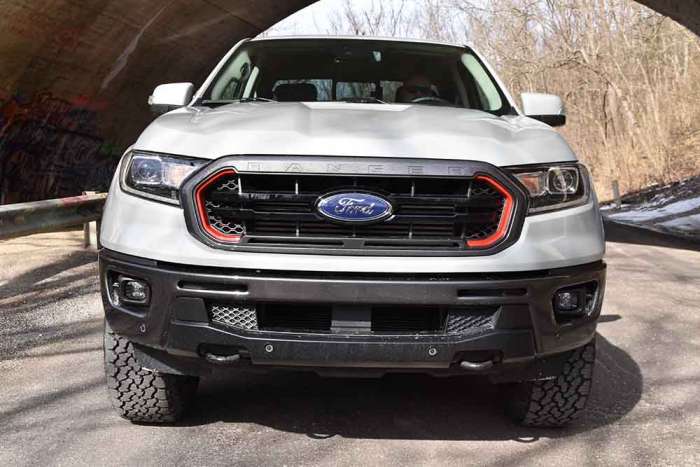 Further completing the look is the grille with a red outline flanking the Ranger-specific grille. Honestly, the Ranger Tremor is the best-looking Ranger I’ve driven. It caught the eye of many onlookers with a couple people stopping in front of my house to do a double take.

Add further the high stance and attractive side steps and the Ranger shows why it belongs off the beaten path.

I will have my official review of this truck later on, for now, let’s take look at a few of the questions I had from people and also talk about how it compares to something like the Raptor. 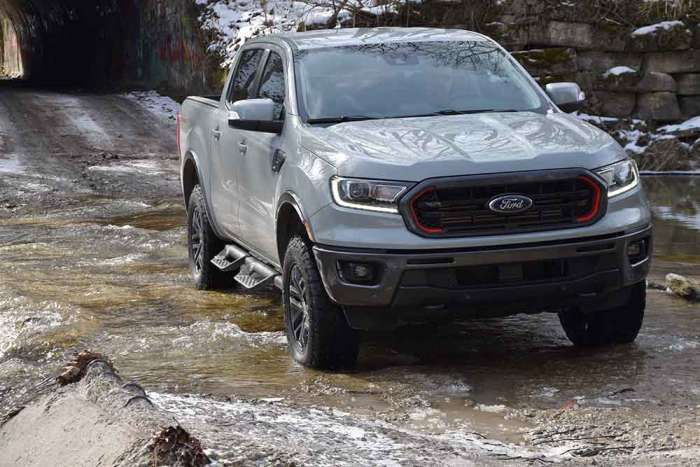 Is the Ranger Tremor as capable as the Ford Raptor?
This is not an apples to apples comparison. The Raptor obviously has more power and performance than the Ranger which has a 2.3-liter Ecoboost engine with 10-speed automatic transmission. As such the Ranger Tremor makes 270 horsepower and 310 lb.-ft. of torque.

That being said, I took this Ranger through the same creek bed and off-road area that I took a 2017 Raptor through. And as far as off-road ability, the Ranger Tremor handled itself as well and proved as tough and capable as the Raptor. And if you’ve read my stuff here at Torque News, you know how much I love the 2017 Raptor.

So saying the Ranger Tremor is close in comparison, off the road, to the Raptor means a lot. 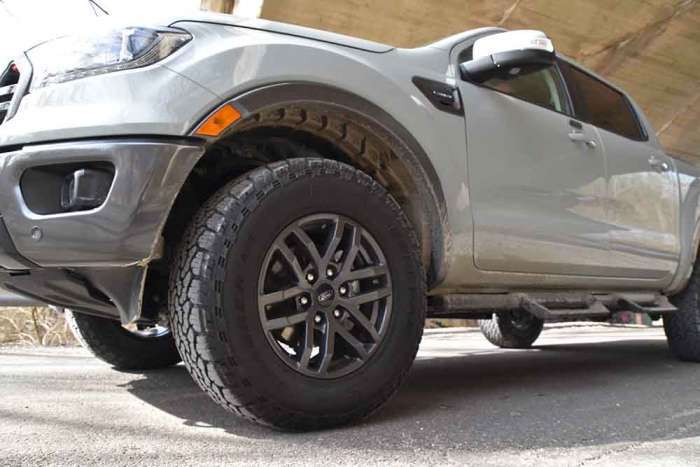 The Tremor includes FX4 content but goes much further including a reworked suspension, specific for the Tremor that gives it .8-inches of additional ground clearance. This offers a better approach, breakover and departure angles when compared to the FX4.

As I made my way through the cold, icy creek bed, the same one I took the Raptor through, I was confident in the Ranger Tremor’s ability. I can’t say I would have been in just a Ranger FX4. 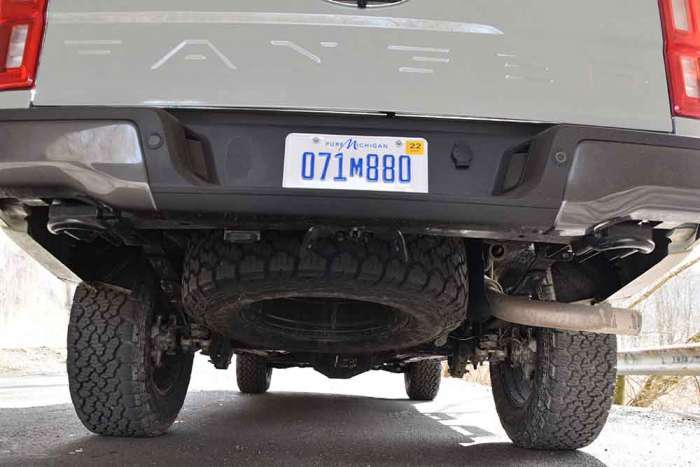 Additionally, according to Ford, the Ranger Tremor gets package-unique, specially-tuned FOX 2.0 monotube dampers with rear piggyback reservoirs and new multi-leaf rear spring setup. The focus of this was clearly on improving off-road control, comfort, confidence and capability without sacrificing on-road behavior. Read more about my overall thoughts of the Ranger Tremor on the road in my upcoming full review.

The part-level changes are all made to take advantage of the Fox dampers and work together as a system in support of this intent. The new springs at front and rear enable increased ride height and wheel travel (particularly jounce), which were identified as a key desired improvements for capability, but are tuned in conjunction with the other components.

Additionally, Tremor gets a bunch of unique exterior and interior design cues FX4 does not get as well as the six-switch auxiliary pack which is visible in the photo below. 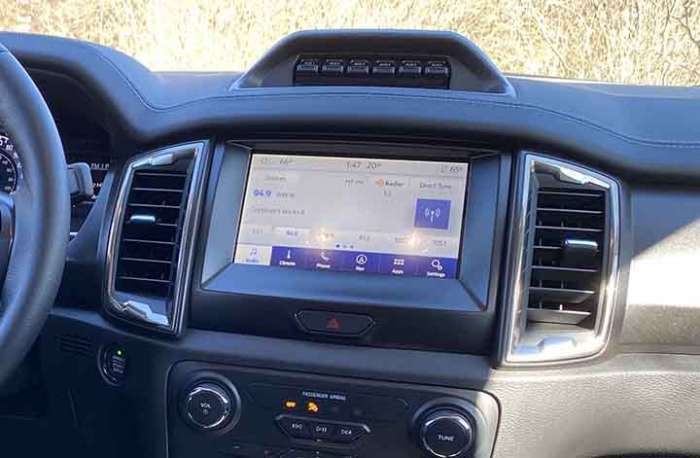 What is the cost of the Tremor package and what trims is it available on?
The Tremor Off-Road Package costs $4,290 for the Ranger and is available on both the XLT and Lariat trims.

This is significant as other competitors only offer their rugged packages on their higher-end trims. For the F-150, the Tremor will act more like a trim and will be offered as Tremor standard, mid and high. 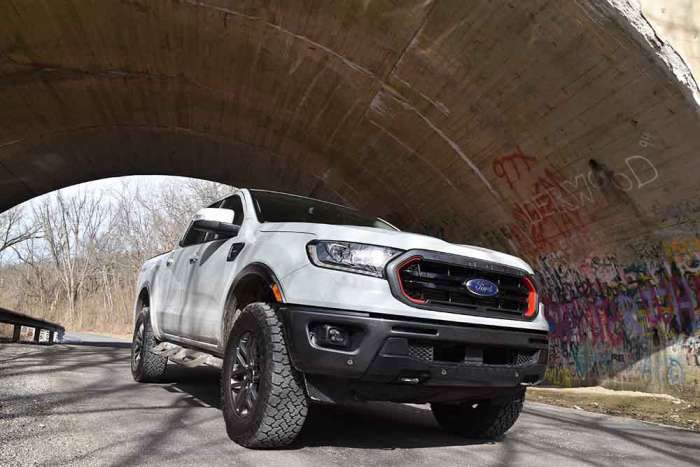 In the past, I was somewhat lukewarm on the Ranger upon its initial relaunch into the U.S. market. But slowly the Ranger is showing its merit and now its tough side. And I like it. One of my most-read stories here at Torque News is titled Why The Ford Ranger Is Already Better Than The Toyota Tacoma. It upset some Toyota loyalists.

Now having spent quality time in the Ranger Tremor, I may have to amend that story and make a follow up that says Why The Ford Ranger Tremor Is Better Than The Toyota Tacoma TRD.

Do you think I'm crazy for thinking a Ranger is as close to rugged as a Raptor or even a Tacoma TRD? Leave me your thoughts in the comments below.

Tesla-Funded Research Reveals One of The Biggest Mysteries of EV Battery
Tesla Tesla Buyer Nets a Whopping $12,000 Discount After Asking for Reduction
END_OF_DOCUMENT_TOKEN_TO_BE_REPLACED