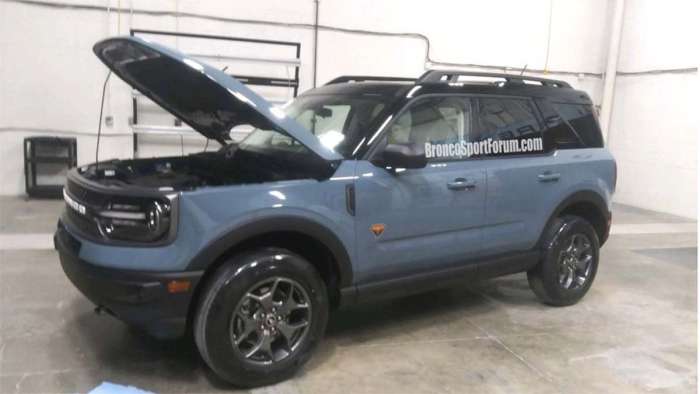 Spy shots leaked on the enthusiast forum/website BroncoSportForum.com gives us the best look yet at the new “baby” Bronco. The 2021 Ford Bronco Sport, aka the baby Bronco, is shown here uncamouflaged to give us the best look so far. Note: This is unconfirmed that this legitimately the baby Bronco, but there’s no reason to doubt it as it looks every bit the part and even resembles several of the spy/camouflaged photos we’ve seen.

You might recall that we’ve all been very frustrated with the lack of leaks and info from Ford on this highly anticipated release. Kudos to Ford and their entire team for staying tight-lipped about it. But from someone who covers content and breaking news, that can be frustrating. But they have a job to do and spilling the beans to me is not included in that job.

Likewise, Ford has taken their sweet time releasing the iconic Ford Bronco. This off-road beast is one of the all-time iconic vehicles from Ford’s rich history. I’ve written about it a couple times over the last couple weeks. The reveal of both Broncos is coming next month, as I wrote about here.

What engine will the Ford Bronco Sport have?
I wrote a couple weeks ago that it was confirmed that the bigger Bronco would have an Ecoboost engine and we know that the baby Bronco will have two engine options. Since the Bronco Sport will share the platform with the Ford Escape, we can extrapolate that it will share the Escape’s two engines, a 1.5-liter Ecoboost and a 2.0-liter Ecoboost. The 2.0-liter engine in the Escape actually has decent performance with 250 hp and 275 lb.-ft. of torque.

It has been widely speculated that a hybrid version, similar to the one in the Escape would be available in the Bronco Sport too. Would the average Bronco buyer embrace a hybrid?

Other news about the 2021 Ford Bronco Sport
In the spy shot revealed by BroncoSportForum, we see the baby Bronco in a new paint color. The one pictured is a new color offering from Ford named Area 51. This new color is a blue/gray variant. Additionally we see the Bronco name emblazoned on the front grille, centered between the round headlights.

The front end is very attractive and thoroughly modern, and the round headlights offer a tip of the cap to the Bronco from the 1970s. The back side also has the Bronco name inscribed, but here it also says Bronco Sport, indicating that this is the smaller of the two Broncos.

It appears to be a body on frame construction, but that is not confirmed. The profile looks a little too typical of other vehicles in this segment although the ground clearance seems pretty good. Ford has said that the Bronco (and the Sport) would primarily go against the Jeep Wrangler, but this Bronco Sport looks more like the Jeep Cherokee and the Chevy Blazer, both of which feel more like grocery getters than off-road beasts.

Before all my Bronco enthusiast friends freak out saying it looks too refined and not rugged enough, realize that the likely intent of the baby Bronco is to be more of a commuter vehicle, with a little off-road ability. We have heard that the bigger Bronco, the one the enthusiasts have been impatiently waiting for, will be incredibly rugged. There’s been leaked patents of removable doors, removable panels and a removable roof on various Bronco forums.

So, we can assume that the bigger of the two Broncos will be everything the die-hard, old schoolers will want. And the Bronco Sport might have more commercial success. Meanwhile, the bigger Bronco will be more of a niche vehicle.

However, I caution Ford to be careful with the release. The enthusiasts want to see the big Bronco and they want it to be an off-road beast. If Ford delays the release too long and releases this baby Bronco first, it might repel the long-time Bronco fans. Ford has a real chance to do right by this iconic vehicle, but they need to execute the unveiling just right.

Thanks to BroncoSportForum for the photos and the inside scoop.

Tomorrow, check out Torque News for more information regarding the all electric Ford F-150.