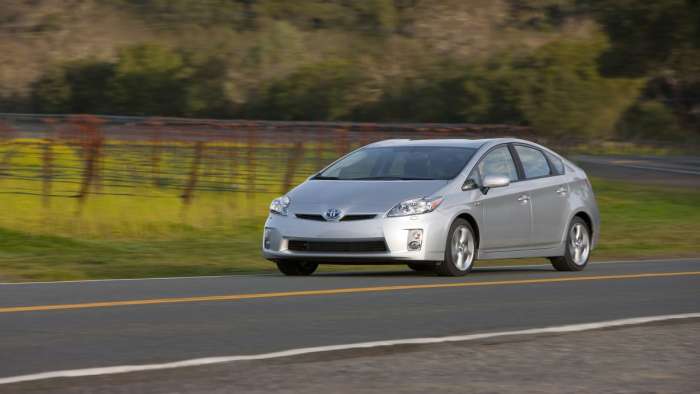 Your Toyota Prius Has Serious Boost

If you were to ask most people what the first word they think of is when they hear Toyota Prius, it would probably be slow. What most people do not know is that your Prius was engineered to have boost, in order to make it faster, but maybe not in the way you think.
Advertisement

The Toyota Prius has a stigma, and one that has really deceived people more than anything. When Prius Generation 1 rolled off the boat into the U.S. It was a slow yet fuel efficient car that did not really turn many heads. Most writers that went and drove it, gave Prius some serious hate initially claiming it to be slow and very lackluster.

They were right. Gen 1 Toyota Prius Prius was seriously anything but exciting, and because of this it earned a stigma pretty quick that all subsequent models were just as awful as the first. The thing is, Toyota had already been gathering data to make Prius better, most people just did not know it.

One of those really neat tech upgrades second generation received was boost. Just not in the way you think, but a better way. First you have to know why first gen Prius earned the badge of slow, then this will all begin to make sense.

First Generation Toyota Prius, the "before" Prius that changed our lives did this in many ways. Prius massively cleaned up tail pipe emissions and reduced fuel consumption in a way no one had ever seen before. It was the ultimate "eco" car and people quickly caught on to them, and how slow they were.

Prius in that time had a high voltage battery that touted a little over 300 volts of electric motor pounding fury. It was really peppy and great, until the power ran out like when going up a hill. Prius only had about 58 horsepower with out the aid of the hybrid battery and if you were out cruising around the mountains with your friends, you may encounter the dreaded turtle mode.

This mode meant that you only could use the gas motor because you had exhausted all the useable energy in the high voltage battery. Journalists quickly deemed Prius slow and this was due to the fact that we only had 300 volts of power to work with, so if it was gone the little engine that could, barely could, and that was bad. Even though they were super futuristic, this was just a limitation they had.

Prius just could not make up for its lack of power in the first years due to it not being able to have the boost it needed to have. Until today.

I Will Take Boost With A Side Of Boost Please.

What we are not told as consumers really what makes the differences in our vehicles. All we know is it either works or it does not. Toyota, however, I believe had the foresight to be able to see that gen 1 Prius was not going to be the end all of hybrids. They used gen 1 to gather data to then make a far superior car we all know and love today, Generation 2.

What really makes gen 2 so good though? Why did it build a cult following of Prius owners? It was because even though Toyota utilized some of the same powertrain components from the previous generation, they improved on them. They improved the horsepower output of both the gasoline engine, and the motor generators. Torque was also improved as well. but what really made the difference is the performance aspect. Gen 2 dominated gen 1, and there was no longer a turtle to slow you down.

Watch how Toyota is using a new SIC technology to improve Prius mileage and click to subscribe to Torque News Youtube channel for daily Toyota and Automotive news analysis.

What Toyota had done to Prius to make this generation better, was to think about what the car actually needed to compete with a regular gasoline counterpart. The answer? A boost converter. This is why the Toyota Prius you are driving actually gets up and boogies down the road. Instead of having only 300 volts on tap in a large heavy hybrid battery, Toyota actually made a smaller and lighter battery with the a neat feature called a boost converter. It literally is almost like having a turbo on your vehicle that spools up instantly and gives you more power on demand. So now your Prius can get 650V instead increasing performance and saving the battery.

Toyota was not only able to reduce the overall battery size and voltage, but they were also able to utilize that power better, giving Prius better MPG, lower tail pipe emissions, and something that it really needed, performance. Boost converters are found on all hybrids now because they are needed to make them more efficient.

A Toyota Prius may still have a stigma to some people, but knowing what I know now about all the cool tech that has made up this little car, I am forever a Prius owner. Plus it is cool to think that I get instant boost on my car where others still are waiting for spool.

Tsingshan's Threat to Tesla: EV Maker Is In Battery Crosshairs
Tesla-Funded Research Reveals One of The Biggest Mysteries of EV Battery
END_OF_DOCUMENT_TOKEN_TO_BE_REPLACED