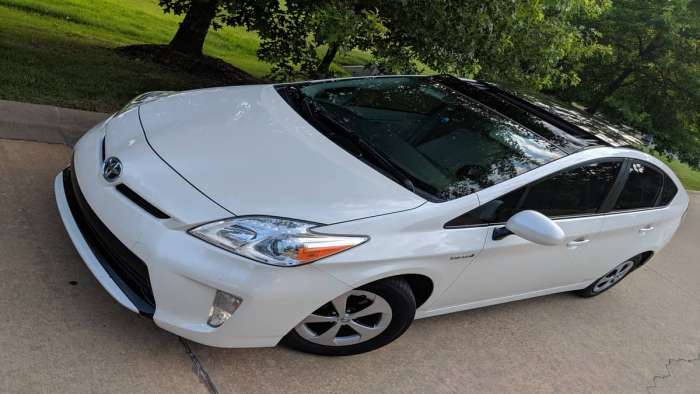 5 Reasons A Toyota Prius is Better Than A Compact Car

The Toyota Prius has been and still continues to be the topic of many hot debates whether it is actually a vehicle that is good for the environment vs a small compact (insert your favorite small car here). I have dug deep down to find 5 good reasons why the Prius is still better than most compact cars.
Advertisement

When someone says, Toyota Prius, there are probably several opinions that pop up about the car. Tree Hugger, slow driver, gas saver, just to name a few. I am certain there are other names that also come to mind which I would rather not share at this point in time, but feel free to message me and we can chat about it. However, I still think that I will probably win this argument and here is why.

Reason 1 - Minimal fuel use while stopped

Here is something your “eco box” cannot do. I can sit in the parking lot, with my kids, and the nice, ice cold A/C is on. I can do this while using only battery power. The engine will cycle on and off during my stay in the parking lot. This all depends on how long the old lady is in the store though. If I do have run the engine it is put to use in the best way possible and store it in the battery to minimize engine run time. Boom. Eat it.

Some will say,``Where did the battery power come from, you have to plug it in and that electricity came from a coal fired power station.” Sorry, wrong again, not all power is produced from coal, or nuclear, or hydro. Which leads me to my second point.

So back to the coal power plant argument. My Prius captures its own energy. Can your tiny little beer can on wheels do that? Um, no it cannot. I utilize my fuel much more efficiently by capturing that energy lost during normal braking and turn that into usable stored power.

I can feel the chill right now of the A/C hitting my body keeping me cool while is jam out to my favorite tunes. Best part is I am not worried about overheating the engine (not that you should be but it is possible) because my engine will shut off when it knows I have enough sustainable power.

Reason 3 has a lot to do with reason 2. When the Toyota Prius goes into regenerative braking it utilizes its motor generators to slow the vehicle rather that use mechanical braking as, should we say your car does. Before you get all hot and bothered about it, Prius does have mechanical brakes, it just uses them only when hard braking is needed. Other than that, a Prius in good working order can go well over 100,000 miles without ever needing to have a brake job.

So unless your little match box of a car is only driven on the highway and sees very minimal use on brakes, you still will not see the miles out of them like I do. Smell that? It smells like victory over here, and that smells nice.

The Toyota Prius gave us so many cool things we use in our world today. Your little beep, beep got a ton of engineering from it. Aerodynamic ability was engineered very deep into the root core of Prius. Why? To optimize how it went down the road. All the plastic panels and wheel covers Prius has designed and freaking wind tunnel tested to ensure the vehicle has less drag. Less drag means less fuel consumption and that means more money in your pocket.

Amongst the engineering, there is also something that I want to point out. Toyota Motor Corporation, ever heard of them? Right, they build some of the most reliable and dependable vehicles on the road. Fun fact, 80% of the number of Toyota vehicles sold in the past 20 years are still on the road today. This is because Toyota makes their vehicles to withstand some of the most harsh environments known to man, just ask the guy who had his Tundra melt in the California fire, and still drive it out like it was no, big, deal.

Toyota Prius is no exception. The engines, transmissions, and everything else in between has been rigorously tested in all types of conditions to ensure that it will keep going for hundreds of thousands of miles. Just ask me, I bought a 2007 Prius with 245,000 miles on it. Guess what? I am still averaging 42 mpg and I am into the car less than $2000. No issues or problems at all. Hmmm, and I get all these other perks? Sign me up.

No matter what you drive I hope you love it. Just keep in mind a Toyota Prius next time you are thinking about getting a commuter. They really have quite a few extra perks that not many people think about when choosing a car.

Peter Neilson is an automotive consultant specializing in electric cars and hybrid battery technologies. He is an automotive technology instructor at Columbia Basin College. He holds a Bachelor of Science in Automotive Service Technology from Weber State University. Peter can be reached on Linkedin and at Certified Consultingand on Twitter at @the_hybrid_guy for news tips.

Carlos Umana wrote on July 11, 2019 - 11:28am Permalink
Let me start for say that I'm with my wife the owners of a Prius Eco 2016, that it's an extraordinary car to all respects,economy, reliability, comfort, inner space and may others characteristics that make this car the ideal en the price range $25,000. It's our second Prius, after a model 2010 that reach with us 90,000 miles, without problems another extraordinary car. I firmly believe that Prius it's the second car in the history, only after the Ford Model T, that put the humans being to move in an autonomous way. I agree with all characteristics pointed in your article and I feel that we have a car designed with the most advanced technology of the state of art. I'm reading you continuously and appreciate your points of view like highly valuable for the people that enjoy the car's future in our hands today. Congratulation for your today's article!!!
Patrick wrote on July 11, 2019 - 2:30pm Permalink
Peter - everything you stated above will also apply to the 2020 Toyota Corolla LE Hybrid. It uses the exact Toyota Hybrid System (THS) along with the 2ZR-FXE 1.8 liter engine and e-CVT that's used in the 2019 Prius.
Daddy Dave wrote on July 18, 2019 - 12:55pm Permalink
I bought my 2010 Prius brand new in early 2010. Now it has 215k miles on it without any major expenses - not even a brake job has been required. The problem is I planned on keeping it to 400k miles. It uses almost a quart of oil per tank of fuel! It will need an engine and battery soon which means it may get "recycled". Though I've been a total Toyota fan for years, I'm seriously considering alternatives for my next purchase.
Michael wrote on January 25, 2020 - 1:20pm Permalink
Hey Dave, I'm late to this thread in a major way, but if you haven't heard already, the oil problems went away by MY 2012. Also, and provided you're still in the market for a vehicle, I would strongly encourage you to check out a 2017 Hyundai Ioniq SEL optioned, that is provided you are still interested in a hybrid vehicle and are still disenfranchised with the prospect of another Prius. Regards.