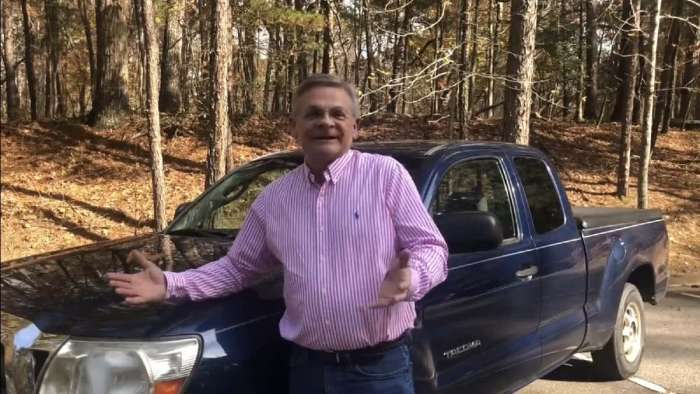 Mike Neal owns a 2008 Toyota Tacoma. He also happens to have driven it over 1 million miles. But that is not the most remarkable part of the story. Meet the man and his truck that have partnered together for nearly 1.3 million miles.
Advertisement

Most car and truck shoppers will perform many long hours of research to ensure they buy the perfect vehicle for their needs. Mike Neal was no exception.

He had just started a new position. A very interesting and rewarding job at that. Mike delivers nuclear medicine all over his home state of North Carolina and often into Virginia. This would require a vehicle that can hold up over the long haul for many years and numerous miles most other people might not even consider.

Just a man and his Toyota Tacoma

“The job I had required a pickup because we carry heavy radioactive loads. So, I did online research. The only truck that would do what I want and that would be as reliable came up to be a Toyota.” Mike said. “And it came down to, I was afraid to get anything but a Toyota!”

This is where our journey begins. With a 2008 Toyota Tacoma 4-cylinder access cab pickup truck and a man with a heart of gold.

Mike takes his position very seriously, and in his mind, the patients he serves are the most important thing. You see, these patients are people who have been diagnosed with cancer, and the medicine he delivers helps physicians detect if their condition is improving or not. Often, Mike is met with short deadlines and unfathomable mileage demands.

Over one hundred thousand miles a year demands.

What about that famous sign on the back of his truck?

When people buy a new car or truck, the dealership that sold the vehicle will often put their name or logo on the back. It is good, solid Advertising 101.

Some new vehicle owners will take that logo off right away. Not Mike Neal, though. In fact, Mike created his own sign around 640,000 miles and updates it every 10,000 miles. That was over half a million miles ago. 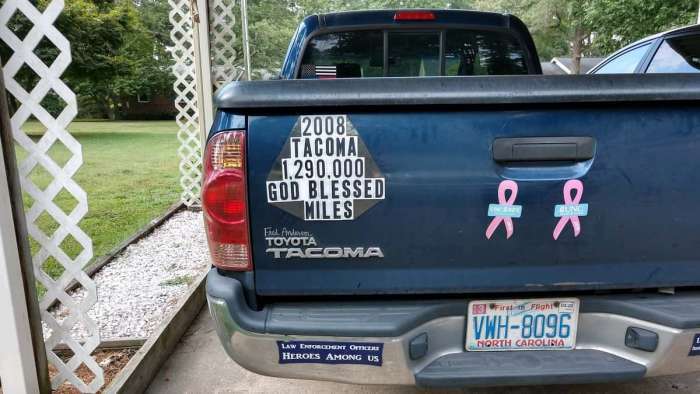 “Thousands of people from all over the country have seen the mileage go up. I’ve had people drive by and give me thumbs up and take pictures of the sign.” He is clearly a man who is proud of his Tacoma.

For the record, I drive about 18,000 miles each year and I think that feels like a lot. Mike drives over five times that much. Yikes.

So, why the high mileage sign on your Tacoma?

Why would someone willingly display their mileage on the back of their truck? I mean, it is basically like advertising for a company for free. This must be the most impactful, inexpensive, return on investment form of advertising Toyota could ever ask for. But, you see, Mike is a humble, grateful man. He does not think this way, and that is why his answer should not have surprised me.

“I wanted to show people just how long the Toyota brand can last.” He replied.

“The thing I love most is when a Chevrolet, a Ford, a Chrysler or any other manufacturer passes me. They are wondering ‘will my car last a million miles?’

Toyota's unofficial quality and reliability spokesperson Mike Neal's message should give hope to shoppers looking to buy a new 2019 Tacoma, Tundra, 4Runner and many other popular Toyota models.

See the 1 Million Mile Toyota Tacoma for Yourself

Let’s hear from the fans around the world

I thought this story would make for good content on my “Toyotajeff” YouTube channel. Not just about the Tacoma, but about the man behind the truck. The video has been viewed over 850,000 times since last November, and I am amazed by the 3,700 mostly positive, encouraging comments people have posted.

“I’ve seen this guy driving down Highway 70 in Kinston (in North Carolina).”

“He is right about the Toyota brand. Trust me. I know.” This one came from an 18-year Toyota master mechanic who sees this quality and reliability over time day in and day out.

“Cool! He should be famous.”

“What a good and humble man. Toyota should buy this guy a new truck.”

“For crying out loud, give that guy a new truck! He’s a walking advertisement!!” This enthusiastic comment was “liked” by 636 viewers.

That last theme resonated strongly with a majority of the people watching the YouTube video I filmed last fall, as hundreds of similar viewer comments echoed that same sentiment. But that was a long time ago. Mike only had 1,218,000 miles on his Tacoma then.

Mike is now at 1,290,000 miles. Lightly driven highway miles for anyone who is trying to ballpark appraise his blue 2008 Tacoma right now.

The funniest comment I saw about this story was from my YouTube viewer Austin. “Imagine if this guy was trying to sell that truck on craigslist. ‘2008 Tacoma 4cyl, lightly used, 1.2 million miles…$8000. No low ballers, I know what I’ve got lol.’”

Actually, it would be funny to have Mike bring his truck in somewhere for appraisal. But that will not happen, as Mike plans to keep driving his trusty friend for the foreseeable future.

Thank you, Mike. We appreciate what you do and for carrying the Toyota torch for thousands of people to see.
Feel free to leave some words of encouragement for Mike and his Tacoma. I am sure Mike is not alone either. Tell me about the high mileage vehicle you are driving as well.

Thanks everyone for reading. See you next story tomorrow…

Gilbert Blair wrote on July 9, 2019 - 7:53pm Permalink
Mike I got a 1997 toyota tacoma ,am over two hundred thousand miles 5 speed manual I love that truck like how jesus love little children.keep rolling mike.
Richard Schaffe wrote on July 9, 2019 - 10:25pm Permalink
Everyone knows Toyota Tacoma are the best pickup trucks on the road they're dependable and reliable
Helen Hobson wrote on July 9, 2019 - 10:55pm Permalink
I have a 1996 Jeep Cherokee with 274,000 miles, I love my jeep. Not knocking Toyotas, my husband wants a toyota Tacoma, Mike is a great spokesperson.
REGINA TOLBERT wrote on July 9, 2019 - 11:16pm Permalink
Wooohooo Mike! You have given me newfound hope. I have a 2004 toyota tacoma with 320,00 miles on it. Truck on sir truck on
Donald Oakes wrote on July 10, 2019 - 12:01am Permalink
My 1997 Tacoma is approaching 400k miles. It looks a little rough but it still runs great! BTW, I just bought a 2019 Tacoma Limited last week and expect to have it for a long time. I will never part with my 1997. It’s actually my dog Rocky’s truck but he allows me to drive him around in it.
Nick wrote on July 10, 2019 - 7:04am Permalink
Never thought my 2005 Tacoma would be the last vehicle I would ever own, but, it's looking that way. Seriously, 15 years later, the truck drives as nice as the day I bought it. Would love to see Toyota step up and give Mike a new Tacoma. Not just for the advertisement, but for his kind acts of service to people in need.
Donna wrote on January 3, 2022 - 10:53pm Permalink
I drive a 2007 Tacoma pre runner. Love my truck. Hope to never part with it. Only has 120,000 miles on it. So looks like i will not have to part with it. Hope Toyota steps and gives Mike a truck. He has earned it.
Wade Cook wrote on July 10, 2019 - 7:39am Permalink
My girlfriend's 5 speed 4 cyl Taco has 515k on the dash and runs way better than my Nissan with half as many miles... The nissan is 10 years older though.
Andres G. wrote on July 10, 2019 - 8:29am Permalink
He should get a new vehicle from the manufacturer..for all that free advertising...and put that one in the museum.
Jon Schoenhard wrote on July 10, 2019 - 9:01am Permalink
Awesome that a vehicle can go that many miles! Hats off to Toyota for the great dependability they have achieved. Hope I can get that many miles on my 2008 Tacoma!
Lex wrote on July 10, 2019 - 9:48am Permalink
That is a shameful amount of miles to drive per year.
Jim Clark wrote on July 12, 2019 - 6:52pm Permalink
Would you please explain that comment! Sounds somewhat negative.......
Rick Garza wrote on July 10, 2019 - 11:44am Permalink
I own a 2008 Toyota Tacoma TRD Sport Double Cab. Currently have 116,000 miles on it. I also change my own oil and plugs. I hope I have the same luck as you with the long term mileage
Mike Collins wrote on July 10, 2019 - 8:37pm Permalink
I guess the author is just going to gloss over the fact that the truck isn't on the original engine? That's a disqualifier if you ask me.
Bean wrote on July 16, 2019 - 2:38am Permalink
Way to nit pick. Negativity. We have yota owners saying "400 thousand miles and running great." I out over 250 tbousand on my 05 when i got rear ended by a honda fk-boy with 3 bald tires in the ran doing what a fkboy would do, txting and pretending to know how to drive. All fkboys aside, my "little blue" was/is a beast never had a major issue with it at all minus the fkboy issue. I did have to do coilpacks (and spark plugs for good measure, only one went but did them all) and that isnt a major issue in my book. My f250 on the other hand 150 -200 thousand miles and a shit ton of issues from the battery to the exhaust. Battery issues, window seal leak, new starter. new trans, looking at new headers and full exhaust need frame resprayed. Oh did i mention the steering shaft broke in the middle of a turn on a rd so with the wheels turnt and the rd straightening back out the only place to land my big boy truck was down small ledge in blue berry bushes. But i towed it out with my 05 yota. Sadly sold it($$ more then what ud think) and got a pretty lil white 2015 version.
Dinesh Patel wrote on July 10, 2019 - 11:29pm Permalink
Mr. Mike, Congratulations and best wishes for your Toyota Tacoma. I wish you the best of luck for another million miles. I have 2008 Toyota Tacoma (new) 4drs short bed with 123,000 miles. I do engine oil change myself. I use the synthetic oil since it available in the market.. I stick regular maintenance very well. Mr. Mike have a wonderful life forever
Curly wrote on July 11, 2019 - 3:04am Permalink
I have an 82 Toyota pickup with over 700 thousand miles keep it running bro!
Wanda J Smith wrote on July 22, 2021 - 8:05pm Permalink
My boyfriend loves Toyota trucks. He buys them used and fixes them up. Right now he owns 5 and I have an order Toyota Camry. I used to have a Toyota Corolla. I drove that car forever even with it's blemishes from being run over a couple times by other drivers. It had 500,000+ miles on it when it died with my teenage granddaughter driving it.