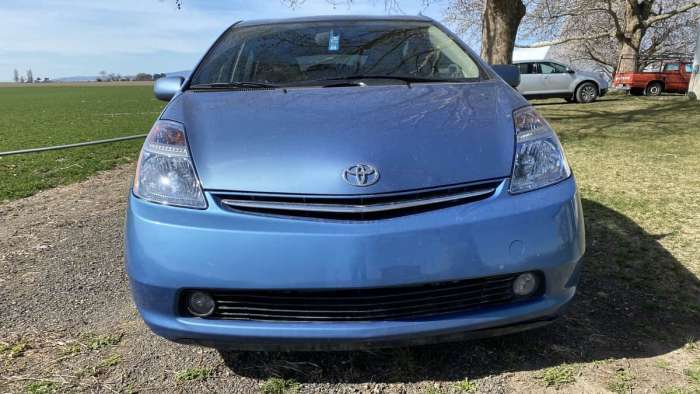 Do not get me wrong, I love my 2008 Prius. However, there is one thing that absolutely drives me crazy. Here is what it is and what the real-world repair cost looks like.
Advertisement

If any of you have been following my stories, you know that I have now owned five second-generation Toyota Prius cars. I have also owned (and currently do) a third-generation Prius as well as a gen one and gen 2 Honda Civic Hybrid. I think it is safe to say I like hybrids, a lot.

Out of all the hybrids that I have owned, my favorite has been my 2008 Prius. It is blue, fully loaded, and has every option you could get when new. I bought this car for research, and so far, I am into the car about $4,000. Not too bad all things considered. I need to give you an idea of what I have done to the car to warrant me saying there is one thing that is the worst about it.

Repairs Done To My 2008 Toyota Prius
The first repair (which was why I bought it) was fixing the hybrid battery. Not a big deal I have done loads of research, and this was a simple repair. Repair number 2 was changing a faulty tire pressure sensor. Not awful, $35 for the sensor off Amazon and a quick program, no big deal. The third thing though, is what kills me about this car, and it is the absolute worst. Headlight replacement. 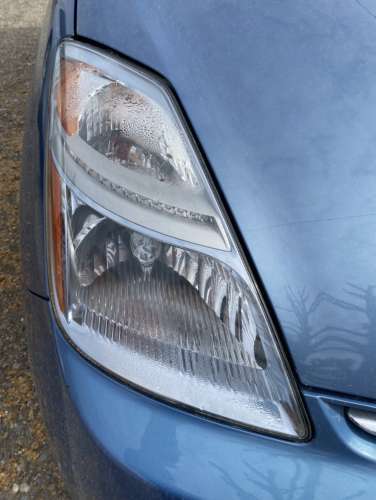 My Prius happens to have everything on it minus the 16" wheels that came with the touring package. I have navigation, Bluetooth, JBL stereo, leather, and, of course, the HID headlights. It is these headlights that I want to focus on and talk profoundly to their demise. I seriously HATE that Toyota even had this option

The Hated HID Headlights
Some second-gen Prius cars with higher trim level packages had the option for HID headlights. At the time, this idea was cool, and the light was superior to halogen lights. The bad part is this. They break, and when they do, it is expensive.

Some of these gen two headlights have had water intrusion issues that warrant replacing the housing and also the ballast that is needed to power the HID bulb. Not a big deal right? Just hop online and order a new aftermarket set that should run you about $150. Wrong. Even worse, dead wrong.

I searched for a week trying to find the best deal for a set of these (no one wants just one good light and the other looking gross, no thanks), and when it came down to it, CariD had the best deal. $385 shipped is pretty disappointing, I wanted some upgraded ones for that price. 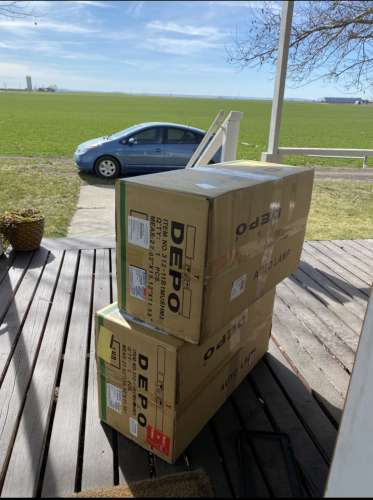 Worse yet, the assemblies do not come with any new bulbs or ballasts, which you need because obviously yours were destroyed in the previous set. Add another $100 for a good set of ballasts and probably another $25 to $50 for some D4R bulbs, and then you can install. Currently, my cost for this replacement job is around $500, before installation. Thank goodness I do repair work for myself, that would have been another $200 for labor I am sure of it.

The thing that really gets me going about how dumb these lights are is what is required to swap in a new ballast or swap a whole assembly. Due to the nature of these lights, there are tiny auto-leveling motors in them. The feature is cool and all, but it is also expensive and, in my opinion, unnecessary. The photo shows the water damaged ballast and also the connector where you have to feed it through. 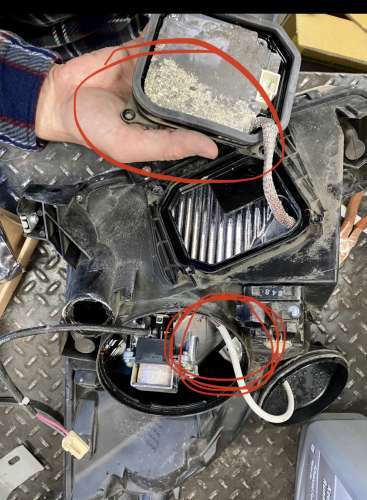 To properly swap over the ballast, you have to remove the motor, which requires you to have to undo the factory light height settings. Not a huge deal other than it is another thing you have to do. Then couple that with having to feed the ballast wires through, and you almost want to burn the car to the ground.

Conclusion
In short, the HID assemblies are overly complicated and cumbersome to work with. HID lights were not intended to break by Toyota, but now because so many leak and the lights are failing, you are forced to fix them or drive without lights. Dumb, dumb, dumb, dumb. Have I said yet I dislike this setup? If not, let me tell you again. I hate it.

I am actively working on a solution that will allow owners to make a clean swap from HID to regular halogen headlight assemblies. I hope I can get this accomplished soon so all of you poor HID owners can get some reprieve from this. Thank you all for reading and I appreciate you letting me vent on the issue. I hope you do not have to go through the same song and dance that I have.

I look forward to seeing you in the next story. The Affect The Corona Virus Could Have On Your 2004-2015 Toyota Prius.

Anahid wrote on March 12, 2020 - 8:32am Permalink
The entire headlight assembly is horrible. I have a 2004 with 255k miles on it. Toyota wanted to charge me $400 when my headlight went out. Pep boys said $200. Thankfully my husband looked online and found a YouTube video, and changed it after we found a HID headlight in sale for $70 or so. Only issue? There is so little space in there he sliced open the back of his hand and still bears a scar 10 years later. So now it's my job with my smaller hands. Still it's been a really reliable car. Oh, and the rear view mirror assembly cost is appalling too. I need to find to cheap black ones some day...
Nclave wrote on March 12, 2020 - 11:17pm Permalink
Mine is 09 Prius that goes one eye on and off. Thanks for the fog light at least I'm safer with it. I also have water inside the headlight assembly. But I still love my Prius even though gas price is coming down.
Sarah Slothower wrote on November 14, 2020 - 9:03pm Permalink
Can anyone send me a link to the HID assembly? Trying to do it myself but having a hard time finding one online. Looking for passenger side
Ben wrote on March 12, 2020 - 8:39am Permalink
I thought I was the only one!
Vince Hoffman wrote on March 12, 2020 - 12:34pm Permalink
Owner of a used 2010 Prius and you are SO right....$300 headlights are my only complaint!
Mark McDonald wrote on March 13, 2020 - 1:56am Permalink
Upgrade to led headlights bulbs cheap at Amazon Drivers headlamp had to reach under fender to squeeze and turn in . Replaced several times. I'm trying led,s now.
Morgan wrote on March 13, 2020 - 5:01am Permalink
I have a hybrid shop in the Austin area and focus mainly on the Prius. I'm ridiculously busy. I also supply Prius parts to all my independent dealers locally and service all of their hybrids. I would of charged $300 installed for a pair of hid's with ballasts and bulbs.
M Adler wrote on March 12, 2020 - 8:40pm Permalink
I did the swap to led headlight. From the xenon HID. Lenses $60 each, bulbs $20 each and you have to cut the wiring and buy a $4 light socket. What I really hate about this wonderful car is that the bumper cover and wheel liners need to be disassembled to change a headlight bulb.
LawWil wrote on March 12, 2020 - 9:54pm Permalink
I have 2008 Touring , had to replace headlights also...bought em off Amazon for about $50 I think, not too hard to change out. BUT, the fuel gauge no longer works, always shows empty.....$1200 repair to change out fuel tank! We just reset the odometer each time we fill up for now...
William W Cravey wrote on March 12, 2020 - 10:46pm Permalink
I just had my headlights sanded, sprayed with same coating as the factory, a little pearl added to the coating and the best LED lights I could buy for $220.00. I was not expecting the LED lights to perform as well as they actually did. Major improvement for less than you spent for you new replacements. Now this shop was highly recommended for this work by several other shops in town. Would do it again.
JR wrote on January 20, 2021 - 8:07pm Permalink
William W. Cravey, would you mind detailing the make/model of the LEDs and/or the shop who did the work. I'd like to be sure I buy quality LEDs and that they don't cause FM interference.
Robert Baird wrote on November 12, 2021 - 1:05am Permalink
Just buy led direct fit. No wiring. And just take the headlight half way out. Other than the screw to the hood bumper that gets rusted... Piece of cake.
kire naumovski wrote on March 13, 2020 - 1:19am Permalink
In Australia i have a 2008 prius. My one uses the regular h4 globes and i have to replace them at least every 4 to 6 months. Its my biggest gripe with my car. Other than that. I love it
Gary D wrote on March 13, 2020 - 1:34pm Permalink
My chief complaint about this model has been the headlights. Normal cars when a headlight goes out no big deal, right? Not these. The Toyota recommended procedure is practically disassembling the front end to get to them and yes, there are YouTube videos for reaching in but they take small hands. Both types of bulb replacements are a terrible design.
Carol Zachary wrote on March 14, 2020 - 6:36pm Permalink
I just got a new Rave Premium and want to be able to see what other people think this car.
Carol Zachary wrote on March 14, 2020 - 7:33pm Permalink
I have a new 2019 rave premier and would like some more information as we go along.