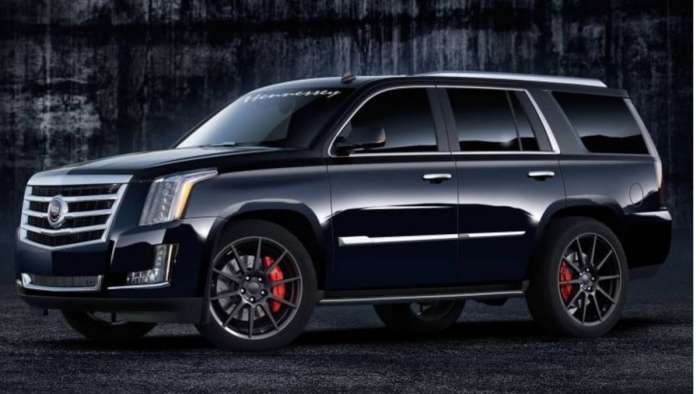 The 400-mile range all-electric Cadillac Escalade SUV could be exactly what the market needs to stoke EV adoption in an underserved luxury segment.
Advertisement

Rumors this past weekend circulated about a car that could be extremely important to growing the electric vehicle market in North America, in the form of the Cadillac Escalade Electric SUV.

An anonymous source close to the brand's mooted EV plans spoke to enthusiast site Cadillac Society, claiming that Caddy's engineers expect the luxury SUV to achieve 400 miles on a single charge. That would catapult the brand right to the front of the pack in terms of range, where the Tesla Model X currently leads the SUV class with up to 325 miles in its current form.

On a related note, here's why Elon Musk recently removed hope for a refresh of the Model X.

Similarly, Tesla expects to hit the 400-mile mark with its high-end vehicles by the time the Cadillac Escalade Electric SUV is expected to arrive in 2022, while Rivian should also be producing its R1S model in this category by then. Elon Musk himself has stated last month that "it won't be long before we have a 400-mile-range car," so it's clear that this will be the next focal point, at least at the top end of the market.

All of this bodes well for the North American EV market, which is sorely lacking in options for buyers in the popular large SUV segment.

Here's more about the model's history in 20 Years of the Cadillac Escalade.

It's been clear for many months now that General Motors (GM) is positioning Cadillac for a lead role in the parent company's EV plans. Back in January, the brand announced that its EV models would be "the vanguard of [General Motors'] move toward an all-electric future,"

Caddy has only the slightest presence in the EV world up to this point.

The Cadillac ELR plug-in hybrid (PHEV) was well-received in terms of drivetrain, fit and finish, but the $75,000 premium price tag put off many potential buyers. In many ways, the car was a very well-appointed Chevy Volt, albeit one with a price tag twice as high as GM's most popular electric model to date. Then there was the Cadillac CT6 plug-in hybrid, which also failed to sell well and was discontinued in 2018 as a result.

However, mere dalliances with the PHEV format do not an EV brand make.

GM's luxury brand is now set to launch several all-electric vehicles, with the Cadillac Escalade EV SUV potentially one of the most important. It will reportedly ride on GM's latest battery-electric vehicle drivetrain, one that is expected to be rolled out to other GM models as the company makes progress towards its goal of 20 new electric vehicles by 2023.

The range and ride will put the Cadillac Escalade Electric SUV in direct competition with the Tesla Model X, which is Tesla's best-selling top tier model so far this year.

See where the Tesla Model X fits into this list of the best-selling electric cars of 2019 so far in this video. (Please subscribe to Torque News YouTube Channel for daily automotive news and analysis).

According to GM Authority, the Cadillac Escalade sold more than 35,000 units in North America last year, making it a prime candidate for electrification. If the brand can convert even 15-20% of those buyers into EV sales, it will stack up impressively against the Tesla Model X.

On the subject of Tesla's future, here's how hybrid battery packs could help the company extend its EV lead.

What Chevrolet has started, Cadillac could well take over in the next few years. The Chevy Volt and Bolt EV have provided the overwhelming majority of GM's electric model sales to date, but that responsibility could soon be passed to Caddy.

On the subject of Chevrolet, here's why the rumored specs for the 2020 Chevy Bolt EV failed to impress some current owners.

In the same January announcement discussing its plans for the marquee brand, GM confirmed that Cadillac is set to become the automaker's primary EV brand.

With a smaller crossover SUV in the works and the Cadillac Escalade EV occupying the larger SUV end of the market, we can expect to see more electric versions of existing models join Cadillac's lineup in the near future.

This is great news for anyone interested in electric vehicles at the higher end of the market. While the Tesla Model X is undeniably a leading option for electric SUV buyers, its futuristic styling and complicated design choices aren't for everyone. An established luxury brand jumping into the marketplace with next-level range is exactly what the segment needs.

It will be exciting to see General Motors lead the way, it the rumors of the Cadillac Escalade Electric SUV's capabilities turn out to be accurate.

Do you think an established luxury brand like Cadillac can transition successfully to electric vehicles? Let us know in the comments. See you in my next story where I am discussing how Electrify America is handling Kia Niro EV, Hyundai Kona Electric, and other charging issues.

Gardner wrote on July 22, 2019 - 10:29am Permalink
I didn't need to wait for the future, I bought a Tesla after great experiences with My Chevy Volts. I tested the Bolt and drove the Jag and Leaf, neither one met my needs, in EV miles per charge and charging infrastructure.
Steve Birkett wrote on July 26, 2019 - 12:47pm Permalink
Fact is it's going to take more than just Tesla options to move the wider market across to EVs. Even Elon has said that the point is to accelerate EV adoption, not just have Tesla do it all. We need new models in almost every segment to make that happen but it's probably going to mean a wait of 2-3 years for anyone who isn't interested in a Tesla, sedans, or the compact/crossover form factor.
Mark wrote on July 22, 2019 - 10:30am Permalink
I agree. A big SUEV would sell really well under the caddy banner.
Steve Birkett wrote on July 26, 2019 - 12:49pm Permalink
Cadillac, in general, could well emerge as the flagship brand for GM's electrification efforts. If they can keep the premium price of the brand but not overinflate the EV part of the premium, as occurred with the ELR, they should do well.
John wrote on July 22, 2019 - 10:31am Permalink
The Cadillac Escalade EV is too much vehicle for my needs but I can understand the appeal to other folks.
Lawrence Chanin wrote on July 22, 2019 - 1:23pm Permalink
A Tesla Model X weighs between 6,581 to 6,878 pounds, and as the article states, it currently has the best electric SUV range of 325 EPA rated miles using the 18650 type lithium-ion cells. The Tesla Model S sedan weighs between 4,769 to 4,941 pounds and currently has an EPA rated range of 370 miles using 18650 type cells. Since the new 2170 cells can have an energy density of more than 20% over 18650s, as Elon alluded to, soon Tesla should have a vehicle with an EPA rated range of over 400 miles when switching the 2170 battery cells. However, Elon is not saying a large SUV will have a range of 400 miles. A Cadillac Escalade with an internal combustion engine vehicle weighs between 7,100 to 7,300 pounds. Even if an EV version could be slimmed down to the weight of a Model X, it is difficult to take the anonymous source seriously that a true luxury Escalade could achieve an EPA rated range of 400 miles by 2022. Perhaps a stripped-down version might be able to claim something around 400 miles based on the European standard.
steve wrote on December 24, 2019 - 6:27pm Permalink
I'm all in, 100%, for an Escalade BEV; moreso if it keeps the 8 cyl, 500 HP motor too.