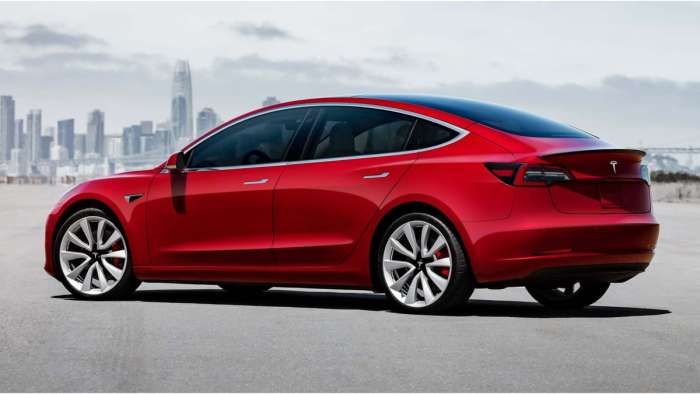 The dominance of Tesla Model 3 sales in the first half of 2019, combined with the brand's forthcoming models, makes it hard to see any other manufacturer competing in the all-electric marketplace.
Advertisement

Tesla's Model 3 has dominated EV sales charts for the past year, quickly putting "production hell" in the rearview mirror and accelerating onto the highway of "market dominance."

No other automaker came close to Tesla's numbers in the first half of the year, leaving those of us with a keen interest in non-Tesla electric vehicles to wonder whether any established automaker has the ability, let alone the willingness, to catch up with Elon Musk's all-electric future.

Tesla's market dominance when it comes to fully electric vehicles can be summed up in one stat: during the first six months of this year, Tesla put more Model 3s on US driveways than all other electric vehicle sales combined.

The Competition Aren't Even Close

It says something that the next closest competitor to the Tesla Model 3 from January through June 2019 was, well, another Tesla. The $80,000+ Tesla Model X, to be precise, which beat out the third-placed Chevy Bolt EV by more than 700 units.

To further emphasize just how one-sided this competition appears to be, here's how the top ten all-electric vehicles list looks for the first half of 2019:

Discover the best-selling electric cars of 2019 so far in this video. (Please subscribe to Torque News YouTube Channel for daily automotive news and analysis).

Firstly, note that we can't even present ten regular all-electric vehicles with more than 1,000 units sold over six months.

The impressive Jaguar I-Pace barely squeaks into four-figure sales and the list has to be rounded out by the niche smart ED, which is limited to short-range travel and doesn't sit comfortably with the more capable EVs above it. This should change as Kia Niro EV and Hyundai Kona Electric sales start to gather pace in the United States, but it highlights the paucity of options on offer for BEV buyers in North America today.

This is where Tesla comes into its own, because it is the only automaker 100% committed to full battery electric vehicles. If they fail, it fails.

Established automakers have a different dilemma. They can see the all-electric future coming, but still make the vast majority of their money on sales of combustion engine vehicles.

While they need to take steps to convince efficiency-minded buyers that they're moving towards electric vehicles - or at least an electrified fleet of vehicles - they can't simply abandon the very models that make them successful here and now.

This is plain for all to see in today's all-electric options.

General Motors manufactures a highly capable all-electric car in the Chevy Bolt EV, then fails to actively sell or market the vehicle in any meaningful way.

Nissan builds a promising lead with the first-generation Nissan Leaf, then fails to keep up with the competition with its second-gen update.

Elsewhere, both BMW and Toyota have a base to build from with popular electric and low-emission cars. Each of these manufacturers has also moved up their electrification plans by two years, from 2025 to 2023. Neither company has concrete plans for the near-term, however, and it's hard to see them quickly shifting the focus to all-electric vehicles.

Throw in the challenge of Peak Battery, highlighted recently by Torque News' John Goreham, and neither is likely to bring a high-volume all-electric model to market that can gain rapid popularity in the mainstream over the next few years.

All of this leaves the marketplace wide open for Tesla, who have their own battery production plans and new models due in key vehicle categories over the next couple of years.

Does the Model Y Seal the Deal?
Despite a lackluster reception at its unveiling earlier this year - not least from Elon Musk himself, who spent more time talking about Tesla's past achievements than the brand's next big thing - the Model Y stands to move Tesla into the mainstream.

What the Tesla Model 3 sedan has done to convert more budget-conscious EV enthusiasts, the Model Y's SUV/CUV styling could do to bring families and everyday drivers into the fold.

The Tesla Model Y is due in late 2020, but rumors of increased production capacity could see it come to market even earlier. The constraints that plagued the Tesla Model 3's ramp-up are also unlikely to be present, meaning that Tesla looks willing and able to clean up in another key vehicle category.

If the brand can also bring an attractive all-electric pickup truck to market by 2021, it will leave established automakers fighting over scraps in the EV market, which is surely not where any of them want to be.

Do you see any threat at all to Tesla in the market for all-electric vehicles? If so, let us know in the comments which brand(s) you think will raise their game!

Erik wrote on July 16, 2019 - 10:24pm Permalink
Free marketing, Hype, Decent product, Lots of production, Willing to burn investor cash without a care in the world.
Donald wrote on July 16, 2019 - 10:24pm Permalink
Wait and see as other models debut. Tesla is a Cult deal. Remembered the VW bug days. Same hype. Owners lying and defending.
Robert wrote on July 16, 2019 - 10:24pm Permalink
GM could make all the Bolts they want but nobody is going to buy them. Tesla doesn't have to try to sell. No dealerships? No problem! Amazing.
Joseph wrote on July 17, 2019 - 9:29pm Permalink
The problems will start when tesla drivers get a chip in the paint or hit a pothole. Months waiting to get car back and a repair bill as long as their arm.
Eric wrote on July 16, 2019 - 10:25pm Permalink
It's all about reputation ("Who Killed the Electric Car?") and a lack of other options. When companies that don't hold the ire of the EV community start selling competent EVs, the landscape will look different.
DeanMcManis wrote on July 17, 2019 - 1:50am Permalink
I think that Tesla's Model 3 (and Model S and X) sales successes are simply a reflection of true buyer's demand. The average new car transaction price in the U.S. is $36K, and to be able to own an electric vehicle that has a good range, is sporty, comfortable, stylish, and fast, but that you can fill up cheaply at home or quickly on the road, and yet requires minimal maintenance over the life of the car has hit a sweet spot with buyers, and the Model Y should additionally attract those buyers who prefer the seating position and added space of a CUV. It's not really a monopoly because Tesla is selling a relatively small number of cars compared to the larger market of gas/diesel vehicles. But I think that the Model 3 just hit a sweet spot in it's $40K-$65K price point. I think that the Bolt and Leaf are doing just fine, and as you mentioned, Hyundai/Kia are on the rise with their popular new BEVs. Also VW is poised to enter the BEV market in a big way next year. A couple months ago VW opened "pre-booking" for their upcoming ID 3 hatchback in Europe, and they received over 10,000 orders online in the first 24 hours. The ID 3 will offer driving range between 200-340 miles, and a starting price under $33K before incentives. We should expect to get the VW ID Crozz CUV next year in the U.S. based on the same MEB platform, with a similar price and range, which should provide more competition in this small but growing BEV market.
Steve Birkett wrote on July 17, 2019 - 9:18am Permalink
Absolutely, I have to be clear and say the "monopoly" term is only thrown about in terms of current all-electric sales, which is clearly a small niche in the overall US market at this point. As it grows, however, it would be preferable to have multiple manufacturers competing within the all-electric segment. Focusing solely on the North American market, I think VW is a good shout as you say, assuming the Crozz really is coming soon and not just another press release. VW has nothing in the way of production but their ads speak to a desire to move quickly in the space. I think Kia has some legs too, as they'll have both the Niro EV and Soul EV to offer across different demographics. They need to actively sell both more widely across the US to gain meaningful market share, though, which is where I see them falling down.
Mark Salopek wrote on July 17, 2019 - 4:49pm Permalink
I agree with Steve that Tesla is currently dominating the US EV market (and is also doing a very good job Internationally as well). I think the main difference between Tesla and the other established ICE vehicle manufacturer's is that Telsa isn't just a car company - it is a software company, a autonomous driving company, and a battery manufacturer all rolled into one. The fact that they employ a much more aggressive continuous improvement model than traditional companies, also sets them apart from the competition. People can say whatever they want about Tesla, but the proof is in the product - they have THE SAFEST VEHICLES to ever drive on the road, they are continually improving every Tesla vehicle as well as providing new features and capabilities with over the air updates (a huge long term bonus to the owners), and they are constantly finding ways to improve the overall vehicle (including continuous battery development), reduce manufacturing costs, and speed up production output. It will take more than a cool new EV from a competitor to unseat Tesla - the competition will need to undergo a paradigm shift in how they design, manufacture, market, and support EVs if they wish to compete long term with Tesla.