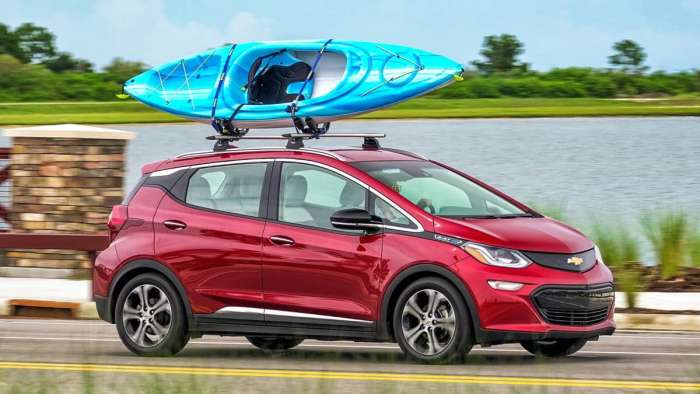 Against the backdrop of record Tesla Model 3 deliveries, Chevy Bolt EV sales remained slow but steady in Q2 2019, raising questions about when GM will shift its electrification plans into high gear.
Advertisement

Monthly sales speculation in the EV world is still rife in 2019, but the real analysis happens at the end of every quarter when many key automakers release official sales figures.

Much of the media attention inevitably focuses on Tesla’s increasing dominance of the electric vehicle market. Not every EV buyer wants a Tesla, however, so legacy automakers like General Motors, Nissan, and more recently Kia and Hyundai have a role to play as well.

Let’s take a look at how Q2 2019 played out for the only other automaker to already pass the 200,000 EVs sold milestone, General Motors.

Sales of Chevy Volt Plug-in Hybrid Slow to a Crawl

Let’s get an inevitable piece of business handled first and pour one out for the much-loved Chevrolet Volt, which remains GM’s best-selling electric vehicle by a large margin.

2019 Chevy Volt sales slowed to a trickle in Q2, as dealerships move their last remaining inventory and used the final few days of state-level incentives in key markets like Massachusetts.

The plug-in hybrid sold 1,146 units across April, May, and June 2019, which exceeded the expectations of Volt sales falling into the three-digit region. Nonetheless, this marks the model’s final bow in a race with remaining competitors like the Toyota Prius Prime plug-in hybrid and Honda Clarity PHEV.

On the subject of PHEV sales, here’s how the Prius Prime and Honda Clarity are going head-to-head.

As we’ve covered before, the Chevy Volt has an indirect impact of sales of the Chevy Bolt EV, not so much through cannibalization of sales but because the Volt has eaten up much of GM’s federal tax credit allowance.

Even so, the federal incentive remains in place at the $3,750 credit level until September 30th, 2019. That means a summer of deep discounting to sell as many 2019 Chevy Bolt EVs as possible before the credit is cut in half again, down to its final two quarters at $1,875, which is incidentally where Tesla now finds itself as we enter July.

With official figures revealing 3,965 units moved in Q2, the 2019 Chevy Bolt EV is posting steady sales so far this year. That number is only 351 units down on Q1 2019, at a time when the full federal tax credit was still in place and Chevy dealerships tried to squeeze a burst of sales in before March 31st.

However, the real question waiting to be answered is what General Motors has up its sleeve for the next wave of electric vehicles, particularly under the Chevrolet banner.

In recent weeks, we’ve looked at both what GM can do to fix the existing Chevy Bolt EV and the potential for a larger electric vehicle, in the form of the rumored Chevy Bolt EUV.

As the summer progresses, we should expect to see much more from GM in terms of turning that rampant speculation into concrete plans. The automaker has committed to getting some 20 new electric models to market by 2023, but its legacy competitors are also moving up their electrification plans to match that timeline.

A major refresh for the 2020 Chevy Bolt EV is now the bare minimum that General Motors needs to keep pace with the competition. If the model’s Q2 2019 sales reveal anything, it’s that this will likely be a final surge of sales to move 2019 inventory and squeeze the last drops out of the federal tax credit at its middle level.

Beyond that, GM needs a broader range of electric vehicles hitting showrooms early next year. And if the General wants to keep existing Chevy Bolt EV lessees in their stable, the company probably needs to reveal these updates before the current quarter is out.

Do you think Bolt EV sales seem okay or does GM need a major acceleration of its electric vehicle line as soon as possible?

Let us know in the comments!

See you in the next story, where we'll visit the GM Renaissance Center in Detroit, MI and look at the company's commitment to electrification.

Lowell wrote on July 5, 2019 - 8:37am Permalink
What a pity that GM never marketed the 2nd gen Volt, the most practical EV for the vast majority of American drivers. I am lucky to own a ‘17 Volt that I’ve now had for 3 years and nearly 40k trouble free miles, never any range anxiety, needing to hunt down a charger, wait to use it, wait to charge, on the few days each month I need to drive more than the 60 miles of range that I average, my on board generator kicks on and I just keep going. I have only tried to use a commercial charger once, they wanted $10! I laughed and drove away, the gas I use to go 60 miles that the charge equaled cost me $4. Oh well, GM is focused on high profit gas guzzlers and the present administration wishes someone would come up with a car that burns coal.
Markley wrote on July 5, 2019 - 8:38am Permalink
I love my Chevy Volt, but my next car will be all electric since the infrastructure is now there, at least for Tesla.
Tom wrote on July 5, 2019 - 8:42am Permalink
We got our Bolt in April. Part of the solid sales numbers is remarkable incentives. We got our LT with DCFC for $0 down and $299/mo. Couldn't really turn it down with those terms!
John wrote on July 5, 2019 - 8:42am Permalink
We will probably be a two Bolt EV family in September - maybe a 3 Bolt EV family as my daughter is thinking about it too. Chevy Bolt meets our needs perfectly.
Eric wrote on July 5, 2019 - 8:42am Permalink
Sales for hybrids (including plug-ins) have plateaued at this point. Simply not much interest. GM's energy is much better spent on BEVs.
Dave wrote on July 5, 2019 - 8:44am Permalink
It's so disappointing because we all thought GM electric cars would take over the world when the Volt was released in 2011. Now the Volt is gone and Bolt sales are at niche market levels and we call that “holding steady”. If I’m not mistaken this is Chevy Truck Month again
Dean wrote on September 20, 2019 - 4:43pm Permalink
Until electric cars are as cheap as regular ones, they will remain niche. Also as long as gas is cheap, same thing.
Ste wrote on September 20, 2019 - 7:56pm Permalink
They're already cheaper in terms of fueling, maintenance, and lifetime TCO. Prices will reach parity, but there's also the element of technological worth to be considered. Flip phones are still cheaper than smartphones and dominated the market at one point, but that didn't last for long. Instant torque, smooth quiet ride, and exceptional efficiency should not be undervalued.