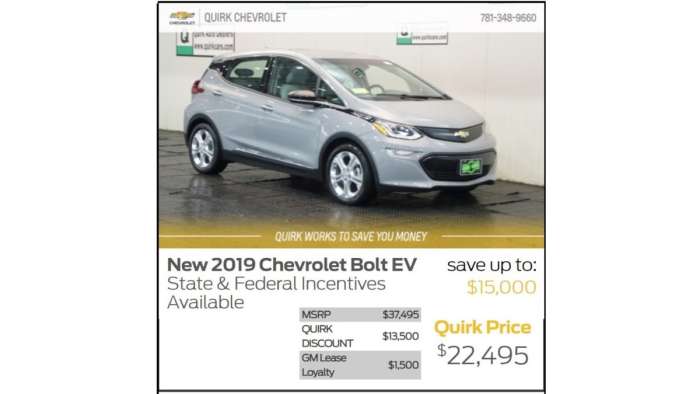 If you’re ready to make the move to a new electric car but don't want to break the bank, the end of September is the perfect time to pick up a 2019 Chevy Bolt EV.
Advertisement

If you follow the Torque News EV column, you’ll know that we’re big fans - and indeed owners - of the Chevy Bolt EV. While it has been challenged from many corners over the last couple of years, it says a lot about GM’s engineering that this seven-year-old EV design still holds up today.

In addition to the excellent application of one-pedal driving and impressive efficiency, the value of the Bolt EV in comparison to its newer rivals remains strong. Even as the manufacturer’s tax credit was cut in half after GM reached the 200,000 electric vehicles sold mark late last year, sales in 2019 have remained stable thanks to the Bolt's inherent value as a highly capable electric vehicle.

With a limited supply of Kia Niro EVs and Hyundai Kona Electric vehicles reaching the North American market, alongside the premium price point of a Tesla with all the autonomous bells and whistles, the Bolt EV has opened up a significant price gap between these competitors with similar capabilities.

Take a look at these pros and cons after two years in a 2017 Chevy Bolt EV below and be sure to subscribe to Torque News Youtube Channel for more News on EVs and the Auto Industry.

With prices in some key markets dropping to the low $20,000 mark after incentives, this article explains why the end of September 2019 is the ideal time for prospective buyers to jump at a new Chevy Bolt EV. We also offer a small caveat on why you might want to wait, despite the outstanding deals currently available.

3 Reasons to Buy a New Chevy Bolt EV in September
Let’s break down the reasons before diving into each and why it should motivate buyers to purchase a Bolt EV this week.

First, let’s look at the dynamic factor of federal and state incentives.

Federal Tax Credit and State Incentives on the Chevy Bolt EV
If you’ll owe at least $3,750 in federal taxes next year, buying a 2019 Chevy Bolt EV this week will wipe out that liability. Come October, the tax credit for GM electric vehicles will be cut in half again to $1,875.

While some of that difference may be absorbed by manufacturer discounts or reflected in dealer pricing, it’s unlikely to offset the full amount. GM has already shown a willingness to discount the Bolt EV to the tune of $5,500 back in June. However, with the updated 2020 model year rolling out in Q4 - more on that later - it seems a safer option to use the tax credit to guarantee your savings now rather than rolling the dice on sales-side discounts later.

That factor is compounded in a state like Massachusetts, where the Drive Green incentive of $1,500 expires on 30th September 2019. Other ZEV-friendly states will keep their credits or rebates in place until the end of the year, with extensions always possible, but the combination of federal and state incentives makes this month a compelling time to buy.

For a full roundup of state-by-state incentives, consult this interactive map from Plug in America.

The 2020 Chevy Bolt EV Comes with Upgrades
We’ve covered the 2020 Bolt EV extensively in recent weeks, but its importance in this context is the impact on the model years that come before it. I looked at the used EV market last week and the upgraded 2020 Bolt could have a similar effect on sales of new 2019 models this week.

The simple fact is that the incoming model year is an upgrade on the outgoing 2019. Whether or not the 2020 Bolt EV will be a winning hand for GM over the next 12 months remains to be seen, but it places enough of a question mark over the value of previous model years to temporarily force prices down.

If prospective buyers can simply hold off a month or two and pick up a better version of the Bolt EV, why not wait?
The answer comes down to price, which is where the pressure on dealers to move metal comes in as the month and quarter come to a close.

Dealers Want to Clear 2019 Inventory
At the time of writing, there are 2,267 2019 Chevy Bolt EVs on dealer lots, according to Chevrolet.com. For perspective, that’s almost two months’ worth of sales for an outgoing model year that dealers have their best chance to clear this week.

In conjunction with the incentive cuts we’ve already covered and the desire to make way for the improved 2020 model, dealers are highly motivated to clear their 2019 inventory.

The end of the calendar month is a good time to negotiate a deal on a new car in general, but the end of a quarter with a new model year incoming and incentives phasing out feels like a perfect storm for price-conscious buyers in certain markets.

Knowing this as you head into the dealership - and being willing to walk away to a rival - could open up even deeper discounts than we’re already seeing. 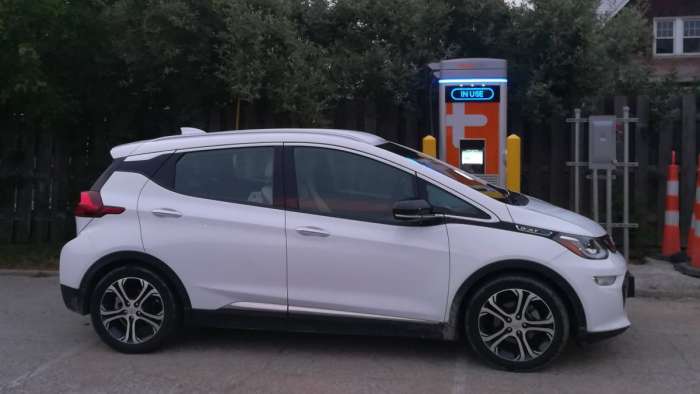 Now is a Great Time to Buy a Chevy Bolt EV, But…
As with any buying advice, there’s always an exception that proves the rule. While the end of September 2019 is undoubtedly a great time to purchase a new Bolt EV, there’s always the possibility of buyer’s remorse.

As outlined above, the incoming 2020 model’s improvements create a distinction between previous years and the next generation of the Bolt EV. That creates a sense of 2017-2019 Bolt EV models feeling outdated, which inevitably puts downward pressure on their price.

While what we currently know about the 2020 Bolt EV is just the range bump, improved cameras, and new colors, there’s always the possibility that GM hasn’t announced everything. If we eventually find that the charging speed and/or profile is significantly improved, or perhaps the infotainment software is enhanced as it has been in previous years, there could be some regret for those who rushed to snag a 2019 model. Given past behavior, it’s highly unlikely that GM will push such changes back to previous model years, assuming they have the ability to do so in the first place.

Even so, the fast charging element of this only really applies to those who drive long distances and want to take their Bolt EV on quicker road trips. The potential for software improvements is real, but nothing that significantly alters the driving experience or fundamental value of the vehicle.

All things considered, the end of September 2019 may go down as one of the best times to buy a new Chevy Bolt EV. If you’re in the market for a capable, enjoyable, and reliable electric vehicle, this is the week to go shopping.

Armed with the information above, we hope to hear stories of brisk Bolt EV sales for September and happy new owners who got a great deal. Let us know if that’s you!

John Goreham wrote on September 24, 2019 - 4:12pm Permalink
Great breakdown. I like stories like this that highlight how amazingly affordable some EVs are right now. If I needed a car the size of the Bolt I'd grab one in the next week. There is no better deal available. The fact that it is an EV is just a bonus.
Joan Potter-Sommer wrote on September 26, 2019 - 7:30am Permalink
Just bought my 2019 Chevy Bolt EV last week, September 20. Am very pleased with it so far. Solid, roomy and zippy. Also, pleased with the tax credit. Go EV's!
Steve wrote on October 7, 2019 - 8:21am Permalink
Congratulations (belated!) Glad you got in before the tax credit cut and best wishes for many thousands of miles of fun in your new Bolt EV!