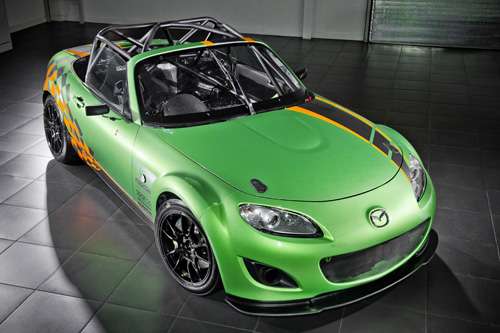 The Mazda MX-5--commonly known in the U.S. as the Mazda Miata--will be playing giant killer as it takes on heavyweight names in racing including Aston Martin, Porsche, Lotus and BMW in the 2011 Britcar MSA British Endurance Championship. A specially-prepared lightweight MX-5 GT will compete in the "endurance" class, which allows heavily modified production car as opposed to the production class, which allows mods mostly related to safety.
Advertisement

Though taking on some storied names and prodigious horsepower, Mazda will rely heavily on the Miata's light weight made even lighter by using Mazda's "gram strategy", the Japanese carmaker's term for reducing weight by taking off one gram here saving another gram there. The racing Mazda MX-5 GT takes it to extremes, however, even acid dipping the body to reduce the thickness of the metal while building a shell that Mazda says took 400 hours to complete and is 17 times stronger than the FIA requirements. Other changes included carbon fiber doors and polycarbonate windows, resulting in a car that weighs only about 1,875 pounds in racing trim.

The racing Mazda MX-5 GT isn't just about weight, though. The car will be powered by a 275 horsepower modified Mazda engine, yielding a power to weight ratio that will accelerate the car from zero to 60 in just three seconds. Top speed is said to be 160 mph. The racer will also have a six-speed sequential gearbox and have its engine lowered in the frame for a lower center of gravity and improved handling.

Jota Sport, a racing organization that is running Aston Martin's GT and Le Mans prototype racing program, is in charge of the MX-5 GT effort as well. The racer will be piloted by two Mazda works drivers, Mark Ticehurst and Auto Express journalists and racing driver Owen Mildenhall.

The Britcar series began in 1997 and for 2011 will consist of ten races at seven race tracks in the U.K., including a 24 hour race at Silverstone at the end of September, plus a three-hour race at Spa Francorchamps in June.

Graeme Fudge, public relations director for Mazda UK, said of the project, "The MX-5 production race car's modest power output, bullet proof reliability and nimble handling demonstrated last year how the MX-5 can be competitive against some of the purpose-built Lotus, VW and BMW race cars. With a higher power output combined with the durability, reliability and handling attributes that the MX-5 is renowned for, the MX-5 GT race car will be strong contender [sic] against the more powerful race cars in its class."

Certainly, the Mazda MX-5 GT race car will be the lightest, fastest and most likely best handling MX-5 Miata ever made. Now let's see whether it can slay giants.

Tesla Contemplates A New Strategy for China Retail even As Sales Boom
Jay Leno on Elon Musk & EVs: “I Think He Should Get ... Credit"
END_OF_DOCUMENT_TOKEN_TO_BE_REPLACED