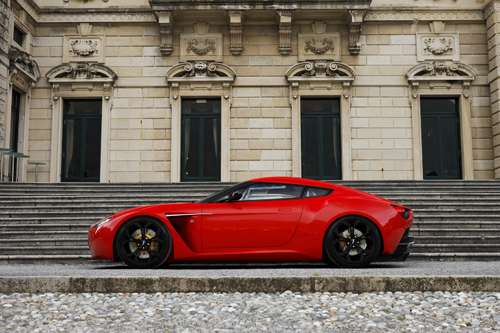 If you loved the Aston Martin V12 Zagato, you're in good company. The race-ready "concept" was voted best in class by visitors to the exclusive Concorso d'Eleganza Ville D'Este Concours, where it was shown for the first time on May 22.
Advertisement

The Aston Martin V12 Zagato, a collaboration between the British sports car manufacturer and the famed Italian automotive design house, debuted as a concept at the Ville D'Este Concours, what might crudely be called a high-end car show, on the shores of Lake Como, Italy, winning the Design Award for Concept Cars and Prototypes. But rather than a mere design exercise, the V12 Zagato will be exercised on the race track less than a week later at the 53rd ADAC ACAS H&R-Cup VLN race at the Nurburgring.

"Nurburgring is where we sign-off every new model in terms of dynamics, and there can be no better place for the new V12 Zagato to be finally tested," said Bez. "The 24 hour race is the ultimate road test and a fitting introduction for the V12 Zagato."

The Aston Martin V12 Zagato celebrates the 50th anniversary of the first partnership between Aston and Zagato, the first being the Aston Martin DB4 Zagato, a lightweight special built for racing in 1961, going on to an successful career in competition.

Dr. Bez had said that the response to the V12 Zagato at Ville D'Este would determine whether the car would be put into production. Said Bez after the car won its honors, "Based on the reactions of our customers to this race car, we hope to offer a road-homologated V12 Zagato in a small, limited number as soon as possible."