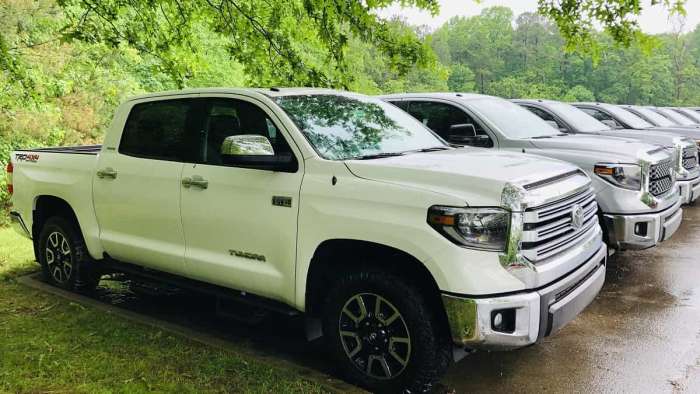 2021 Toyota Tundra - Here Are the Features You Asked For

All signs point to a fully redesigned 2021 Toyota Tundra. Let’s play engineer for a few minutes. What features would you want on this new Tundra if you were in charge?
Advertisement

Truck enthusiasts are among the most passionate people on the planet. They love their trucks! One of the most loyal groups is TundraCrew, a Tundra-strong, Tundra-proud online group 40,000 people strong. I posed a simple question to them: “How would you redesign the 2021 Tundra if it was up to you?” You can imagine the wide variety of thoughts and opinions I received. It was both enlightening and fascinating.

What are we working with now?

Toyota Tundra is one of the most reliable and dependable trucks around. We have had numerous Tundra drivers reach well over 200,000 miles. In fact, two known Tundra’s have gone over that mythical One Million Miles mark! Tundra is available as a 4.6L and 5.7L V8 engine, capable of producing 381 horsepower and 401 lb.-ft. torque. Both engines have a 6-speed automatic transmission. The 2019 Tundra comes in 2 cab configurations – double cab and CrewMax. The CrewMax is famous for its gigantic rear seating and a 5.5 foot bed.

Performance of Toyota Tundra – how would new Tundra drive?

Suggestions were plentiful, but members of TundraCrew would like to see a new powertrain consisting of an 8-speed automatic transmission or more. The 5.7L V8 engine is still extremely popular, but people would love to see class-leading horsepower, torque and towing capacity. Some requested towing capacity of 12,000 pounds. Increased payload would be useful as well.

It came as no surprise that respondents need an improvement in gas mileage. Fuel costs can affect a family’s budget tremendously, and some people would be grateful to see fuel estimates get to 20+mpg.

The most popular overall request was a useful locking rear differential and/or limited slip differential for tackling tough terrain and obstacles.

One of the most polarizing aspects was cab size and bed length on the CrewMax. Many TundraCrew members suggested offering CrewMax bed options, possibly 6’ and 6.5’ lengths. The question is, would you take space away from the rear seating area or keep it the same and just make that configuration longer?

Interior – what should be included?

Although Tundra has been refreshed a few times along the way, it has been a long time since it has seen a new design. Along these lines, drivers had more than enough suggestions for interior updates.

A great fit and finish goes a long way. People responded they would like a modern look and feel inside their new Tundra. With that comes both comfortable fabric and leather seating with plenty of padding and lumbar support. Offering both heated and cooled front seating is a major bonus.

Smart key push button start was a feature many truck enthusiasts asked for. I thought the most practical answer was making dual temperature controls available on the SR5 trim and above. My wife and I are about 10 degrees apart – how about you? We need this!

A superior audio system and speakers offering crystal clear sound was a huge suggestion. I mean, we all spend so much time in our vehicles. Sound is crucial! People asking for Apple CarPlay and Android Auto will be pleased, as Toyota has already announced they are installing these immensely popular applications beginning with 2020 Tundra’s, and also the 2020 Tacoma (read about the new TRD Pro here). See my newest story comparing 2019 Tundra to 2019 Toyota Tacoma.

Rear seating was also a hot topic. Going off the theme that we spend so much time in our vehicles, drivers wanted their back seat passengers to have reclining seats with a strong air conditioning system. They should also have multiple USB ports, along with large cup and bottle holders. The hottest wish list item by far was adding “under rear seat storage.”

Other suggestions were easy-to-use illuminated buttons and controls, bigger front cup holders and even a mini fridge in the center console (I’m pretty sure Land Cruiser suggested this one!).

Did someone say Diesel?

We have all heard rumors and rumblings of this for over a decade, but folks are clamoring for a diesel option. Will it happen? Only time will tell. But these are the 9 things Toyota Tundra owners want from Toyota and diesel is one of them.

Also, building on the theme of improved gas mileage, what would a Tundra Hybrid look and drive like? What would gas mileage estimates be?

It would be a solid idea to offer a basic work truck that does its job and does it well. No frills, no high-tech, maybe a front bench seat. Just a Tundra that will last virtually forever and be reasonably priced.

Although there were many ideas offered up to redesign the new Tundra, some just wished it would stay the same. “Don’t change too much in a truck that is really good. Simplicity is why Tundra has reliability. You want a truck for life and save money in the long run - get a Tundra like it is!”

One happy recent Tundra buyer summed things up from a different perspective, “I just bought a brand new 2019 so don’t change anything for 3 more years. I don’t want buyer’s remorse lol.”

What features and options would you like to see in the new Tundra? What things would you change and what would you want left exactly the same?” Thanks for reading everyone and see you next story!