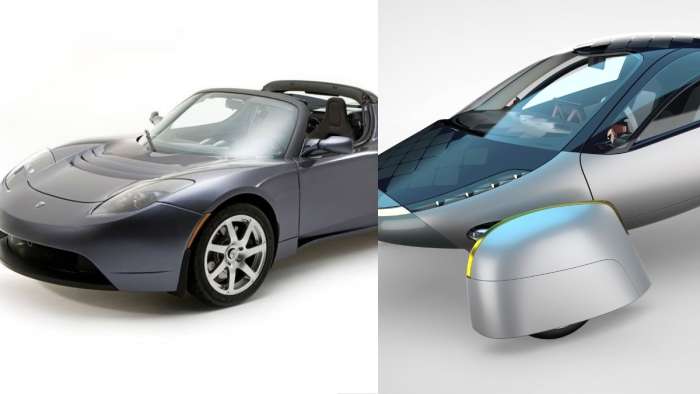 Pioneering Innovation in the Tesla Roadster and Aptera

Yesterday’s leading edge technology of the 2008 Tesla Roadster was groundbreaking when new. But how does it compare to today’s new automotive technology as shown in the 2022 Aptera?
Advertisement

To be clear, I am NOT talking about Tesla’s upcoming Roadster II rocketship (hopefully due out in 2022). I am looking back to Tesla’s first production EV, the original Tesla Roadster.

In 2003 (18 years ago) Martin Eberhard was a successful electronics entrepreneur who wanted to buy a cool sports car, but he didn’t want one that was a polluting, gas guzzler. He had created the Rocket e-book reader, which used the latest technology, lithium ion batteries. Because nobody in the world was selling electric sports cars, he got together with Marc Tarpenning and co-founded Tesla Motors with the idea of building the first one.

In 2004 Elon Musk joined in as a major investor (and later became the CEO of Tesla). Eberhard and Tarpenning worked with Lotus cars, and rebuilt their lightweight Lotus Elise sports car (adding 6,831 lithium ion batteries in a large pack) and a 244HP (185kW) electric motor, to create the speedy Tesla Roadster. Before this time, electric cars were seen as heavy, slow, ugly, golf carts. But in 2008 the 2,650lb, Tesla Roadster went into limited production, redefining EVs forever. It used it’s new 53 kW lithium ion battery pack to attain an unprecedented (for the time) 221 miles of range, and a 0-60MPH time of 3.9 seconds, which was the same as the legendary 2008 Ferrari F430 high performance car. But starting at around $100,000, it was not going to be a car for everyone. Still, 600 people placed preorders and deposits before the first Roadster was built.

Even though the Tesla Roadster looked a lot like it’s chassis donor Lotus Elise, in the end only 6% of the Lotus parts were shared with the Roadster. Early on, the fact that no major automakers or parts suppliers believed that Tesla would survive to build their first car meant that they had huge difficulties getting parts and components for the Roadster. Tesla's new connection with Lotus helped here, as Lotus had years of experience working with legacy automakers in resolving engineering and parts supply problems. But by 2008 Tesla still was having problems with their early 2-speed transmission design’s reliability, and they ended up going with a single speed gear set, just like they use today.

Many of you may not have heard of Aptera Motors, but the company was also founded way back in 2006 by Steve Fambro who was also an electrical engineer with the dream of designing and building his own super efficient, sporty, 2-seat, electric vehicle. He soon brought on Chris Anthony to be the COO, and they started working on an aerodynamic, 3-wheeled car design, with a fully enclosed cabin, and side-by-side seating for two, that had a hybrid engine which got a whopping 330MPG. That design later evolved into a full battery-only electric vehicle. Aptera had gotten serious funding from Google and other big investors, and they were planning to start production in 2008 (like the Tesla Roadster).

Aptera had also applied for federal funding like many green industry startups, but because the Aptera had 3 wheels instead of 4, it’s funding application was denied. Also around this time our national economy tanked in a huge recession, and even though Aptera lobbied to get their EV included for federal funding, it was again declined, and they had to return deposits and close their doors in 2011. Steve Fambro and Chris Anthony moved onto other successful businesses providing innovative vertical farming, and building commercial lithium ion battery packs.

Their success with their new businesses made it possible for them to look at the possibility of starting up Aptera again in 2019. Since closing in 2011, Tesla had been able to show the world that EVs were no longer slow, short range, unattractive, or unprofitable. And the Aptera’s streamlined, super efficient body design was teamed up with modern electric wheel hub motors, updated electronics, and powerful, slim battery packs to introduce the restyled Aptera 3.0. Which is currently planned to start production later this year.

Looking at the capabilities of the innovative 2008 Tesla Roadster when compared to the upcoming Aptera highlights how far EV technology has come in the meantime. For practicality, time and budget reasons, Tesla was only able to bring down the Lotus Elise’s drag coefficient of drag from 0.41 to 0.36. But in contrast the Aptera has a super slippery Cd of 0.13, which is about the same drag as the just the side view mirrors on a Ford F150. And this lower drag translates into much greater efficiency. The 2008 Tesla Roadster went 221 miles using it’s 53kW battery, whereas the Aptera only needs a 25kW battery to go 250 miles. And with a 60kW battery the Aptera will go 600 miles.

Interestingly, in 2016 Tesla started selling a Roadster 3.0 battery pack upgrade that used newer LG Chem batteries, and the retrofitted pack that fit 74kW of capacity in the same pack size as the Roadster’s original 53 kW pack brought up the original Roadster’s range up to 340 miles, but Tesla’s battery upgrade cost $29,000. In comparison, the 40kW Aptera that I have ordered should have a range of 400 miles, and the whole, new Aptera EV costs $29,800. With a 100kW battery Aptera starting at $44,900, it gets an unequaled 1000 miles of range.

As mentioned before, the base Tesla Roadster was high-performance-car quick. But it was also high-performance-car priced. The 2022, $25,900, 2-motor Aptera offers acceleration around 0-60 in 5.5 seconds (which is nearly as quick as today’s entry level Tesla Model 3) but adding a rear wheel hub motor to the Aptera gives it all wheel drive and fiery acceleration of 0-60 in 3.5 seconds, which is actually quicker than the $156K, 2011 Tesla Roadster Sport model.

Lastly, in comparing the original Tesla Roadster to the new Aptera, there are some features that simply were not available on the Roadster back in 2008-2012. One feature is SafetyPilot, which offers level 2 autonomy, including lane keep, adaptive cruise, and emergency braking. Newer Teslas of course also come with the comparable Autopilot software as well, and they also offer “Full Self Driving” for $10,000 more.

One big feature that the Aptera offers which the Roadster never had (and even new Teslas do not offer) is Aptera’s “Never Charge Solar package” that installs fitted solar panels to the top of the EV and potentially adds as much as 46 miles of range each day to the Aptera’s batteries. That adds up to 322 free added miles of EV range per week that you get for just parking your Aptera out in the sun all day. That could mean that if you live in a sunny climate (like me) and drive less than 322 miles a week, you might not ever have to recharge your Aptera!

None of this comparison is meant to diminish the amazing achievements of the original Tesla engineers, whose innovations on the Tesla Roadster blazed the path for all EVs that followed. It just shows how much EV technology, efficiency, and value has evolved over the past 13 years, allowing the Aptera to offer similar performance to the Tesla Roadster, and 2X+ efficiency, for a fraction of the price.

The Tesla Roadster was a dream car of mine for years, but I couldn’t afford one. Whereas the Aptera is priced around the same as a Toyota 86 coupe, and it will be far cheaper to operate.

If you are interested in putting in a pre-order for an Aptera, you can save $30 off of the $100 pre-order price by clicking on my referral link here.

Eric L. wrote on February 26, 2021 - 10:31pm Permalink
"The original Tesla Roadster achieves 4.17 miles of EV range for each kW of electricity." Mi/kW would be a measure of distance covered per unit of power, which doesn't make any sense. Similarly, 53 kW would be a measure of the battery pack's power output, not energy capacity. Please, correct the many instances in this article where kW is written but kWh is what was intended.
Len Nowak wrote on July 20, 2022 - 10:54am Permalink
Thanks for the history….And if you want to see a 2008 Tesla Roadster, they unveiled a donated one , while I was at the Kingman, AZ EV Museum ( inside the Kingman Visitor Center) the Earth Day 2022 weekend, talking about Aptera ( I have a few unveiling pictures, if interested )
Thomas Bushaw wrote on July 20, 2022 - 6:15pm Permalink
Thanks, Dean. Very nice historical perspective and comparison. I followed Aptera during their first incarnation, but was a little late to the game when they started back up a couple years ago. I had not followed Tesla (especially the early days) that closely so this was a nice history lesson!

Tesla-Funded Research Reveals One of The Biggest Mysteries of EV Battery
Tesla Tesla Buyer Nets a Whopping $12,000 Discount After Asking for Reduction
END_OF_DOCUMENT_TOKEN_TO_BE_REPLACED