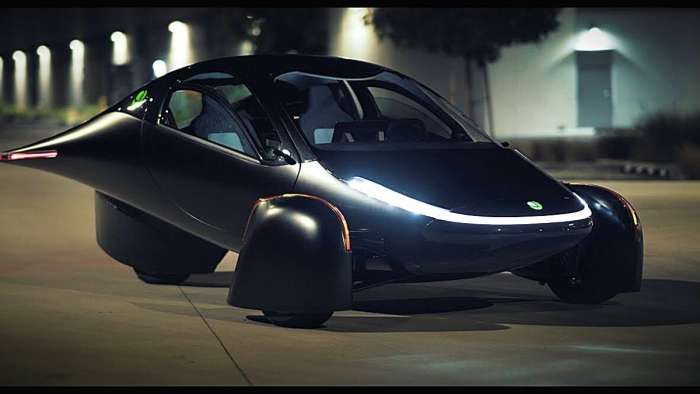 Reborn Aptera EV Goes 1,000 Miles on a Charge and May Never Need To Be Recharged

I know that it sounds like science fiction, but even if Aptera only attained half of their vehicle’s amazing claims, it will be a game changing EV. 1000 miles is almost 3 times the range of the impressive Tesla Model 3 Long Range which goes 353 miles on a full charge.
Advertisement

If you have been watching out for innovative, green vehicles for a few years the name Aptera will ring a bell. In 2006 they announced that they would be building a two seat, 3-wheeled vehicle that would get 300+ miles per gallon as a hybrid, and later they would offer an all electric version as well. Aptera means “wingless” in Greek, and the teardrop shaped vehicle looks a lot like an airplane without wings. That shape is no accident because instead of engineering a car that performed well because it had more power, Aptera chose to design their car to maximize efficiency.

But back in 2008 when every green startup from Tesla to Solyndra was getting huge government loans to start their businesses, the government denied loans to Aptera because there were only provisions to support 4-wheeled electric vehicles. Unfortunately this was also at the beginning of a big recession, and in 2011 they returned customer’s deposits and shut their doors.

But that wasn’t the end of Aptera. Tesla and others had shown that the market for EVs was better than ever, and growing steadily, and in 2019, Aptera Motors was re-formed under the leadership of the original founders, Chris Anthony and Steve Fambro, as Aptera Motors Corp.

The good news is that EV technology like wheel motors and batteries had improved dramatically in the years that had passed. And Aptera’s model of efficiency would “turbocharge” their original design to be quicker than before, and get far more driving range than any other production EV.

It can be configured as front wheel drive, with wheel motors on each front wheel, getting to 60MPH in 5.5 seconds, or you can add a 3rd motor out back and hit 60MPH in an amazing 3.5 seconds!

In this latest design of the Aptera they are achieving an industry-shattering 10 miles of EV range per kW of electricity, which is 3-4 times as much as today’s best EVs. Which means with their largest 100kW battery pack they can get 1000 miles of range! And on top of that they have this Never Charge plan that puts 180 small solar panels on the hood, roof, and tail of the Aptera to get as much as 40 miles a day from the solar panels alone. Which means that (depending on where you live, and how far you drive each day) you could potentially not have to recharge your Aptera at all.

Aptera recently released a video that went viral showing the new Aptera 3, and they have received over $100 million in new car orders so far. In fact I placed an order for a new Aptera myself. I chose the middle level, $30K, 400 mile model, and added AWD ($2500), custom colored paint ($1500), and the Never Charge solar package ($900).

Aptera has plans to start delivery of their first EVs in 2021. Will they make it this time? And will I get one in my driveway? I don’t know. But I’m excited to think about it. And hopeful about a brighter, more efficient EV future.

Also check: "Sion Is The 1st Remarkable Solar Car for Daily Use at a Bargain Price."