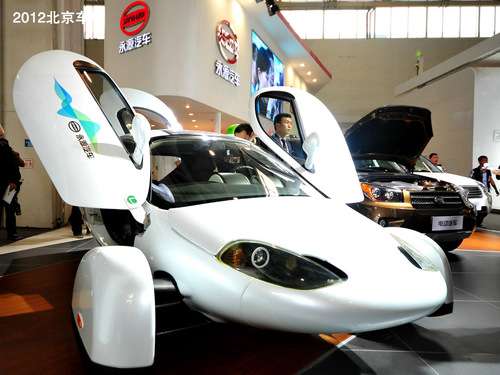 Aptera is back, with resurrection of the three wheel electric vehicle planned by Zaptera

Last winter Aptera died suddenly dashing hopes that the company's iconic three wheel electric car/motorcycle would ever be sold, those hopes are being reawakened by a new company, Zaptera, that plans to go straight to production with sales commencing in early 2013.
Advertisement

A few years ago Aptera was one of the darling companies in the EV Revolution. A three wheeled vehicle that looked more like a wingless airplane than a car, the Aptera had a loyal rabid fan-base who lined up with deposits and waited for their amazing looking electric vehicle to be designed and built. Unfortunately the years turned to anger and betrayal, and eventually Aptera folded. News is circulating of a rebirth of Aptera at the hands of a new company, Zaptera. That company has partnered with the Zhejang Jonway Group for manufacturing, with final assembly to occur in the U.S., and sales to begin in early 2013.

Aptera was a startup company based in San Diego. The company had developed an intriguing three wheeled electric "car" (technically, it's a motorcycle because it has 3 wheels) with fantastic aerodynamics for amazing efficiency. Big claims were made about a long driving range and high miles-per-gallon-equivalent fuel efficiency. The other core feature of the Aptera was the use of modern composite materials, both for light weight and strength. A large fan base developed around the company, eagerly waiting for the start of production. However it took way too long for the company to develop the Aptera into a production vehicle, the rabid fan base turned angry, and last winter the company abruptly died.

Zaptera is a brand new company which has bought up all rights to Aptera, from tooling and equipment, to designs, and patents. The company intends to get into the electric vehicle business, beginning with rebirthing the vehicle previously known as the Aptera SO-1. The Zaptera was discovered at the Beijing Auto Show, in the Jonway booth, a fact which seems to have gone unnoticed until today. Additionally the Zhejiang Jonway website shows a few pictures of the vehicle on the show floor, surrounded by booth babes. Manufacturing of car bodies will be handled by the Chinese automaker, Zhejiang Jonway Group, and if all goes according to plan the company expects to have 2000 Zaptera's for sale in early 2013.

Is Zaptera associated with ZAP? ZAP is an electric vehicle manufacturer, based in Santa Rosa CA, with a long and troubled history, and is the designer of the ZAP Alias, another three wheeled electric vehicle. The early reporting on this development claimed it was ZAP Jonway which had bought the rights to the Aptera. If true that would make ZAP Jonway associated with the production of two different three wheeled electric vehicles, the Zaptera and the Alias. To confuse matters, the name, Zaptera, seems like a name one would chose for a company associated with ZAP. Another connection is that ZAP has partnered with ZAP Jonway, and Zaptera has partnered with Zhejiang Jonway. None of that is true, however. Rick Deringer of Zaptera explained in a phone call that there is zero connection between Zaptera and ZAP. In choosing the manufacturing partner, Deringer says he went directly to parent corporation in the Jonway group, while ZAP Jonway is just one of that group's subsidiaries.

The pictures on the Zhejiang Jonway website show the Aptera SO-1 variant, the one which famously flunked the Progressive X-Prize contest due to handling problems and a door that flung open. Deringer explained that Aptera made many design changes after the contest events, and the vehicle Zaptera will manufacture will contain those changes.

Because Aptera had finished design work on the vehicle, Zaptera intends to go straight into manufacturing, as evidenced by the projected early 2013 delivery date. The company intends to use the same electric drive train choices, including an air cooled battery pack from A123 Systems, and an electric motor from Remy.

Among the assets Zaptera acquired is the list of people who had expressed interest or had placed deposits on the Aptera. Zaptera intends to reach out to those people for their initial customer pool. While a lot of ill-will was developed over the years towards Aptera, this may be a shrewd move because those people are already pre-sold on the Aptera concept even if they're angry towards Aptera-the-company. The former-Aptera customers will be offered special deals on the relaunched Zaptera.

Another asset Zaptera acquired is the four-wheel vehicle Aptera had designed while trying to get the Dept of Energy loan approval. Zaptera is not interested in pursuing that vehicle at this time. In part this is because the three wheeled vehicle can be brought to market more quickly. Legally it is classified as a motorcycle, and therefore requires much less testing and regulatory before going to manufacturing and sales. However Zaptera does envision branching out into producing a full line of vehicles, under a strategy of focusing on vehicles to fill specific niches. During the phone call Deringer talked about electric trucks such as postal trucks or food trucks as one potential niche market.

The zaptera.com website should have a reservation form and other information available by the end of May 2012.

Panasonic Updates Profit Forecast, Noting How Much Tesla Batteries Help The Jump
2022 Porsche 911 GT3 Laps Nurburgring in 7:04 With Journalist Behind The Wheel
END_OF_DOCUMENT_TOKEN_TO_BE_REPLACED