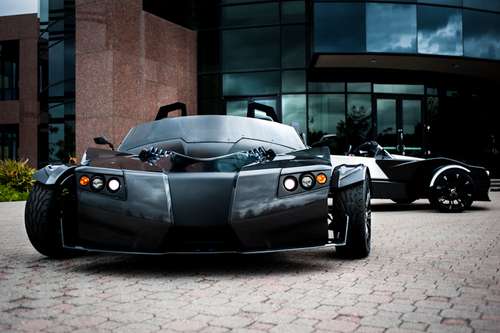 The TORQ Roadster designed by Epic EV is a three wheeled electric speed machine built for performance where the Aptera was built for fuel efficiency.
Advertisement

The Aptera dream may fly again with a newly announced three wheeled electric sports car, the TORQ Roadster. The TORQ has been designed by Epic EV, a company founded by Aptera co-founder Chris Anthony, and carries forward many of the ideas Aptera tried to develop. Where the Aptera was shooting for high fuel efficiency, the TORQ Roadster shoots for performance and fun.

The TORQ Roadster will go on sale in April and will be available for in-person demonstrations at the Epic EV R&D Center in Vista, CA, Saturday, April 6th from 1pm-5pm. Deliveries will commence in April and the price starts at $65,000 in the United States and €50,000 Europe.

In terms of performance, the Roadster has it in spades. According to Epic EV it will do 0-60 miles/hr in under 4 seconds, and the 3 wheeled architecture can achieve over 1G of lateral acceleration. The electric motor provides over 600ft/lbs. of peak torque with a peak horsepower of over 400 hp. It features Wilwood 4-piston race proven brakes and a Formula 1 style high-performance custom cam suspension and chassis, designed by Palatov Motorsports. The battery packs come from another Aptera-connected company, Flux Power.

The three wheeled design reduces drag on the tarmac by 25% increasing the vehicle's energy efficiency. The TORQ Roadster has a track width over 80" to improve stability and handling.

Plans are to produce 50 TORQ Roadsters in 2013 and make a substantial production increase in 2014. Interested parties can place a deposit now, and for the 2014 model year the company will start a waiting list.

“While seeking record breaking MPGe with the 3 Wheeled Aptera Electric Vehicle I often found myself longing for a more aggressive styled and track worthy adaptation. The TORQ will create a class of its own with its perfect balance of power, handling and aggressive styling,” said Chris Anthony, Epic EV’s founder and co-founder of Aptera, the World’s Most Efficient Commuter Vehicle. “The TORQ Roadster confirms that you don’t have to compromise performance to embrace efficient vehicle technologies.”