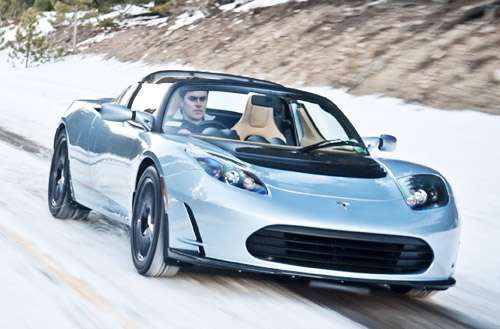 The iconic Tesla Roadster, the first fully electric production automobile on the market when it came out in 2008, will be updated with significant improvements offered only in Europe, Asia and Australia – presumably in right-side steering models – while the limited supply lasts.
Advertisement

The Tesla Roadster currently holds the world’s greatest distance on a single charge record at 311 miles, set in the Global Green Challenge in Australia’s Outback. The brand has over 2,100 of the EVs on the road in 30 countries worldwide and estimates they have all together logged some 18 million miles of petrol-free motoring producing zero emissions from the vehicle itself.

The manner in which electricity is produced is, of course, a separate issue unto itself.

"The Tesla Roadster is the first and only of its kind: an electric sports car with exhilarating performance, zero emissions and gorgeous looks," said Tesla Vice President of Communications, Ricardo Reyes. "This latest version embodies Tesla's commitment to constant improvement. These Roadsters are our best ever."

The updated Roadsters now come in a choice of “exclusive” colors, namely Cosmic Black, Galactic Gray and Magma Orange with coordinated interiors. Mindful of the Central and Northern European climate, a rear snow cover along with improved motor and inverter systems provide even better traction and handling in inclement weather.

Contrastingly, the air conditioning system has been upgraded for driving in the squalid dry season of the Australian Outback. Xenon headlamps have been added for improved visibility at night and new windshield seals quiet the interior even more. This would not even be a concern if the motor was not so whisper quiet.

Recharging has been made quicker and more versatile for charging in Europe and Japan with two new Mobile Connectors available for The Tesla IEC Type 2 (Mennekes) Mobile Connector. The first allows owners to recharge from Type 2 stations and outlets, commonly available in Europe. Additionally, the J1772 Mobile Connector enables charging from a rapidly developing infrastructure of public J1772 charging stations in Japan.

Updated Roadsters are available now in Europe, Asia and Australia, while they last. It is with heavy heart we see the trailblazing and visionary Roadster fade from availability in the U.S.

Still with only 2,100 in existence throughout the world, as the current owners age and resell the iconic sports car, their value as one of the first and rarest models of early 21st Century EVs can only appreciate with the passage of time.

As the Tesla Roadster makes way for the impressive Tesla Model S, we are watching a significant moment in history unfold. Will you be able to tell your grandchildren or great grandchildren you drove one of the first electric roadsters of the post-industrial age? We hope you will…