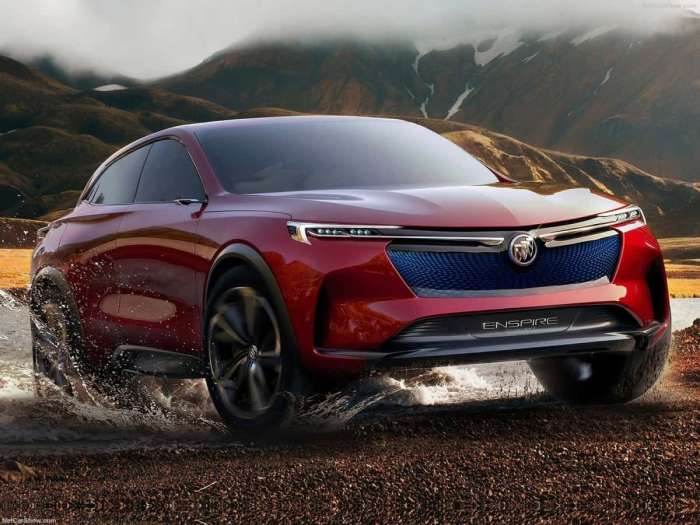 Velite 6 and Enspire definitely could be comeback vehicles for Buick in the United States.
Advertisement

I decided to write this brief commentary on Buick, Cadillac and GM's electric car opportunity after reading Torque News reporter Al Castro's story titled "What Comes After Chevy Bolt: There’s an Electric GM in Your Future." Please read that story before reading this commentary.

Frankly, Buick has branding problems in the U.S. that they are working on changing. New Buicks no longer say Buick on them, and just have the older 3-shield logo to identify them here. And they are trying to reinvent themselves with their new Avenir brand.

But right upmarket from Buick has always been Cadillac, who did a great job reinventing and revitalizing its brand name as well.

Unfortunately for Cadillac when they repositioned themselves against luxury German automakers like Audi, BMW, and Mercedes, their similar higher pricing followed. And they priced themselves out of the market with the Cadillac ELR PHEV, and even now the Plug-in Hybrid CT-6 is a tough sell against Model Tesla Model S and new PHEV models from German automakers.

Yet, potentially this is an opportunity for Buick to make a solid place for itself in the near-luxury market between Chevy and Cadillac. Perhaps with the Avenir sub-brand. And the Velite 6 and Enspire are perfect cars for this transition.

As an Avenir model, the Velite 6 could be a PHEV model that is upmarket from the Chevy Volt, but available at sub-Cadillac prices.

You can see why GM released the Enspire concept in China to fire up excitement for the Buick brand there. It would be a very cool car, and much like Jaguar's new iPace electric crossover. Having 550HP, 370 miles of range and a 4.0 sec 0-60 time, it would be a great fit for Cadillac's performance/luxury market here in the U.S., but if they really want it to sell in great numbers here in the United States (and broaden Buick's market share) they should offer it as na Avenir model, starting around $55K.

However, if Enspire came out as a Cadillac they would price it around $75K+ and sell 1/4 as many. But for under $60K it would undercut the Jaguar iPace (and Tesla Model X) and steal away more affluent buyers who would be looking at a loaded Model 3, or near-luxury PHEV buyers currently looking at Audi, BMW, Volvo, or Mercedes models.

It is a great opportunity for GM, if they play their EV cards right.

Let us know please what you think about the GM's EV opportunity in the comments section below. Also, check out FCA's EV plans: Better Late than Never: FCA Chrysler Details their EV Plans, Finally.