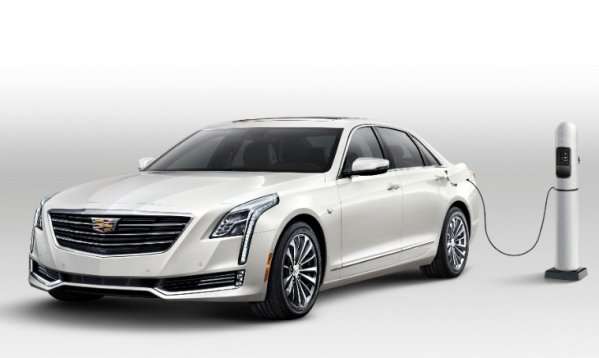 General Motors has announced that the 2017 Cadillac CT6 Hybrid will go on sale next spring and when it does, it will offer a combination of 30 miles of all-electric driving and solid performance from the turbocharged 4-cylinder engine – with GM promising a 0-60 time of just 5.2 seconds.
Advertisement

The Cadillac CT6 is, without question, the greatest big Caddy in many moons and with the arrival of the GT6 Plug-In Hybrid in early 2017, this beautiful rear-drive luxury sedan will become one of the most fuel-friendly vehicles of its type. Like many newer hybrids, the CT6 Hybrid will feature an all-electric driving mode, but unlike many hybrids, the CT6 will still offer an impressive level of performance.

In short, the 2017 Cadillac CT6 Plug-In Hybrid should offer the greatest combination of electric range, luxury amenities and driving dynamics for the price. Really, shy of the Tesla Model S, the new CT6 Hybrid might be the best choice for someone who wants all-electric range in a luxury sedan that is fun to drive.

“The CT6 is a technological showcase throughout, and by far the lightest car in its class, making it an ideal platform for electrification,” said Cadillac President Johan de Nysschen. “In the CT6, Cadillac presents a new formula for prestige luxury. The advanced Plug-In Hybrid system is a key addition, providing a combination of exceptional fuel economy, crisp acceleration and strong electric-driving range.”

The Heart of the 2017 CT6 Hybrid
The 2017 Cadillac CT6 Plug-In Hybrid will be powered by a 2.0L turbocharged 4-cylinder gasoline engine which is mated to a new Electronic Variable Transmission (EVT). This new transmission design has a pair of electric motors which produce around 100 horsepower each, so when you are cruising around in EV mode, these dual electric motors provide around 200 horsepower without using any gasoline.

When the need arises for more power, the 2.0L turbo engine fires up and with the dual electric motors, the CT6 Hybrid offers a total system output of 335 horsepower and 432lb-ft of torque – enough to move this big sedan from a stop to 60 miles per hour in just 5.2 seconds. The CT6 Hybrid will also hit 150mph under full power, so while the performance levels aren’t mind-blowing, they are very good for a hybrid with electric-only capabilities.

When driven conservatively, the 2017 Cadillac CT6 Plug-In Hybrid can go an estimate 30 miles running strictly on battery power with a top speed of 78 miles per hour. Automakers like that 30 mile estimate, as studies show that a 30-mile range satisfies the daily commute of a massive number of American drivers. Of course, when you factor in the unlimited range of the gasoline engine (provided that you can find a gas station), the CT6 Hybrid doesn’t come with any range anxiety, so owners can enjoy their electric driving to and from work, while also using this big Caddy for longer trips on the weekend.

The 2017 Cadillac CT6 Plug-In Hybrid is a large, premium luxury sedan that offers electric-only driving and a comfortable level of performance, making it a rarity in the “green car segment”. This ecofriendly luxury sedan goes on sale next spring and when it does, the MSRP starts at $76,090. This puts the Hybrid model towards the top end of the pricing scale in the CT6 range, but we can expect that it will have plenty of premium standard features to go with that premium price.