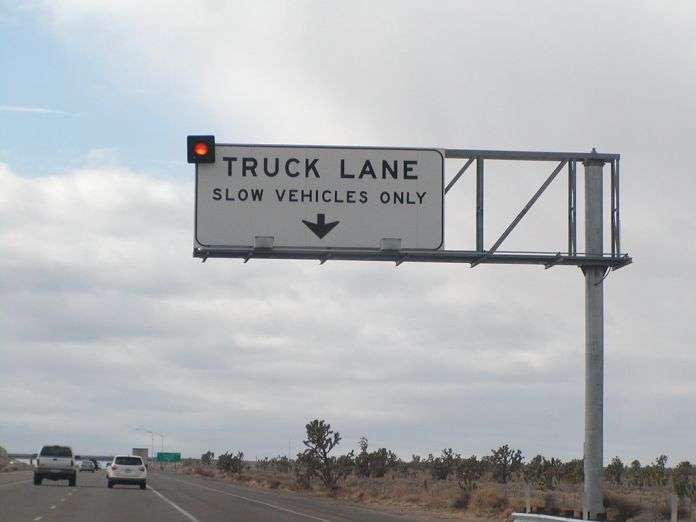 Lower costs and higher performance are great for the trucking industry, but increased safety benefits everybody on the road.
Advertisement

Tonight Elon Musk unveiled the Tesla Semi Truck. With lower operating costs, a million mile warranty, better performance, "megacharging", and a worst case range of 500 miles, it's a game changer for the trucking industry. But for the rest of us who aren't truck drivers or who don't own trucking companies, it's going to mean a lot more safety on the roads.

In an increasing number of cities, trucks are being restricted on one lane. The biggest problem with trucks is how SLOW they go compared to most other vehicles. Truckers I've talked to hate driving in heavy traffic because regaining highway speeds takes a half mile or more, and stopping suddenly like most cars is nearly out of the question. Trucks struggle to go up hills at normal highway speeds, struggle to hold speed going down hills, and just generally struggle to do anything at all.

Performance with heavy loads is what sets the Tesla Semi apart when it comes to safety. With a full 80,000 pound load (a typical semi-truck max load), it can get to 60 MPH is just 20 seconds, and can haul these loads up steep grades at 65 MPH. Compared to diesel trucks, this is beyond night and day. It means impatient drivers won't be struggling to pass slow trucks and taking dumb risks. It means they'll be able to go with the normal speed of traffic, or at least a lot closer to it.

In other words, the Tesla Semi's performance is going to save lives, possibly even yours. And that's just the beginning of the safety benefits!

Because the Tesla Semi has regenerative braking, the typical friction brakes will be nearly impossible to wear out. On steep downhills, where a truck will struggle to keep the right speed, the Tesla truck will not only hold the right speed, but recharge its batteries in the process. For emergency "panic" stops, having two redundant brake systems will keep enable much faster stopping with much greater safety. "Runaway Truck" exits onto deep sand should be a thing of the past.

Another trucking safety nightmare is the jackknife. 80,000 pounds is a tough thing to keep under control, and if that trailer starts going sideways, it could easily overpower the tractor. According to Musk, "Jackknifing is impossible" with the Tesla Semi. Thrust vectoring, or giving the truck's 4 electric motors different amounts of computer-controlled power, should prevent such an occurrence. Combined with a low center of gravity, enhanced autopilot features, forward collision prevention, and automatic braking, this will reduce the number of accidents that can obliterate the typical family vehicle.

Finally, the truck is capable of safety slowing to a stop and staying within its lane in the event the driver suffers a medical emergency. Even if the driver completely blacks out, it can stay inside the lines, slowly come to a safe stop, and automatically contact emergency personnel to check on the driver. Not only can this prevent tragedy for the rest of us, but the families and friends of the men and women who bring us the goods we need daily are more likely to get their loved one home alive in such an event.

Even if you don't care at all about Tesla, electric vehicles, or any of the environmental considerations, Tesla is going to make your drive at least a little bit safer and easier when sharing the road with trucks. For that, we should all thank Mr. Musk and his team.