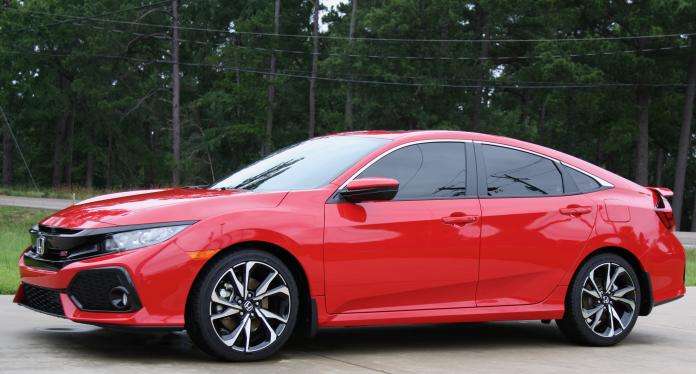 I tend to get bored with cars pretty quickly, but the Honda Civic Si has managed to hold my attention even after 4,000 miles of daily driving. Here’s my experience.
Advertisement

The Exhaust and Turbo Sounds of Honda Civic Si

I was surprised how quiet the exhaust was - perhaps too quiet. Given the effort Honda put into making changes to the exhaust system for the Civic Si, I expected a bit more aural feedback. Likewise, I couldn’t hear the turbo at all. As it turns out, I may have been listening too hard. As the days and miles passed, I began hearing subtle hints of the exhaust along with audible clues that there was indeed a turbocharger under the hood. As a daily driver, I’ve learned to appreciate the quietness.

I expected short, precise shift throws and that’s pretty much what I got. When the car was new, shifting to even-numbered gears often resulted in a plastic-like feel and sound that seemed out of character. In addition, sixth gear occasionally refused to engage without a firm yank of the shift lever in precisely the right direction. After the first several hundred miles, however, the sixth gear issue disappeared and the shifter feel improved noticeably. The clutch pedal is very light and engages just before the pedal is fully released, but the low effort makes the Civic Si comfortable to drive in stop-and-go traffic when a lot of clutch action is required.

Torque from a Tiny Engine

As expected for a small-displacement, turbocharged engine, the car feels like a two-horse wagon with one missing horse from a dead stop - at least until the turbocharger begins providing boost just above 2,000 RPM. At that point, first gear runs out quickly with the all-season tires squealing the entire time. A quick shift to second gear results in a momentary loss of assistance from the turbocharger, a jaw-clenching thud, and a chirp from the front tires. It doesn’t take long for the turbocharger to spin back up and produce an impressive level of forward thrust from the tiny, 91 cubic inch engine bolted inside the 1.5-ton car. Performance in third and fourth gears was almost as impressive. The tiny engine’s torque can be felt even in fifth and sixth gears. This car rarely feels underpowered on the streets. Even driving uphill rarely requires a downshift. The engine is as smooth as many six-cylinder engines and remains well behaved even up to redline without any unnecessary drama.

Here’s where the car really stands out. The Civic Si is equipped with an electronically-adjustable Adaptive Damper System, but I sometimes question its value and wonder if that money would have been better spent elsewhere. Civic Si seems to handle just as well in normal mode as it does in the slightly-firmer sport mode. Similarly, the suspension is comfortable even in sport mode. In fact, it’s hard for me to tell the difference between the two modes without deliberate concentration. The Civic Si remains both stable and comfortable through corners at speeds much higher than would gain the attention of other motorists and law enforcement officers. The helical limited-slip differential works wonders for keeping tire spin and torque steer in check. I feel it is one of the most valuable upgrades over the standard Civic.

The Civic Si’s brakes feel powerful and more than adequate. The car begins slowing the moment the pedal is pushed and the braking force is proportional to the amount of force applied to the pedal. The brakes never feel grabby or soft. In short, they feel confidence-inspiring and exactly how I think brakes should feel.

The steering feels direct without being twitchy thanks to the quick, variable ratio setup. The amount of power assistance varies with speed and drive mode, but always has enough assistance to make one-handed turns in the parking lot while becoming firm enough for confident lane changes at high speeds. It can get a little on the firm side for long-distance travel in sport mode, but the car is stable enough that constant steering corrections are minimized.

Initially, I had concerns about the lack of adjustable lumbar support and adjustable headrests in the Si. Over time, I’ve found the seats to be very comfortable. They’re supportive enough to hold me in place while cornering yet comfortable even after driving for several hours at a time. No one seat can fit everyone perfectly, but I find them well designed and very comfortable for my tall, thin frame. It did, however, take me a while to find the right seating and steering wheel positions so that I didn’t bump my left knee on the bottom of the steering wheel after releasing the clutch.

The quality of materials and textures used on the interior varies from adequate to impressive for a car in the price range of the Civic Si with one exception: The rough, course material used to cover the seats and armrests is abrasive to skin resulting in light blotches. It’s not as bad on the seats as it is on the center console and door-mounted armrests where Honda should have used a smother and easier-to-clean leather or vinyl.

All controls are within easy reach, but more consistent operation would be nice. Both my 2017 Honda Ridgeline and 2017 Honda Civic contain a black, rectangular button with a small white icon on the driver’s door. On the Ridgeline, this button opens the fuel door. On the Civic, this button opens the trunk. I often open the wrong thing. The up and down arrow buttons on the steering wheel controls have different functions as well. On the Ridgeline, they control the volume. On the Civic, they change the source.

The system has plenty of volume with acceptable high-end and midrange frequency response, but bass is lacking - even with the small subwoofer mounted in the rear shelf. Increasing the bass and subwoofer levels to their maximums helps somewhat, but this resulted in a terrible vibration in my Civic Si. I try and avoid the hassles of taking my cars in for repair when possible, so I chose to fix this one myself. My solution involved inserting some strips of foam between the plastic trim and the metal shelf.

Parks McCants wrote on October 8, 2017 - 11:54pm Permalink
Interesting. I don't discover a succinct conclusion here as to your assessment of ownership value. I guess I have to ask the question: Would you buy another Si without further upgrade and refinement? I'm sensing that you are not happy with the experienced turbo lag between shifts. Have you timed the lag? How long are we talking here (delay); what is the second-count of acceleration delay on launch? Thank you. I think you'd be surprised: Time it!
Roger Maxwell wrote on October 9, 2017 - 7:53am Permalink
If I could go back four months and start over knowing what I know now, I would again choose the Si. I haven't timed the turbo lag and while I've heard others complain about the delay (particularly the "artificial turbo lag" introduced by the ECU between shifts), I haven't found it particularly bothersome. Since significant boost doesn't occur until 2,100 RPM in the Si compared to the 1,800 RPM in CVT-equipped models, theres a brief moment where I want to form a deeper depression in the steel floor with the accelerator pedal from a dead stop, but that moment passes quickly and first gear runs out before I have much time to complain. The other delay immediately following a shift related to ECU programming could be a detriment in competitive situations where you need to maintain maximum boost between shifts, but it's never been a problem for me on the street. Although these two delays are often referred to as "turbo lag", I consider turbo lag to be the time it takes the turbocharger to overcome rotational inertia and reach the proper speed to develop the target level of boost. Since the turbocharger in the 1.5L engine is very small, it is capable of spinning up very quickly...when the ECU commands it to.
Parks McCants wrote on October 9, 2017 - 11:28am Permalink
Thank you Roger.