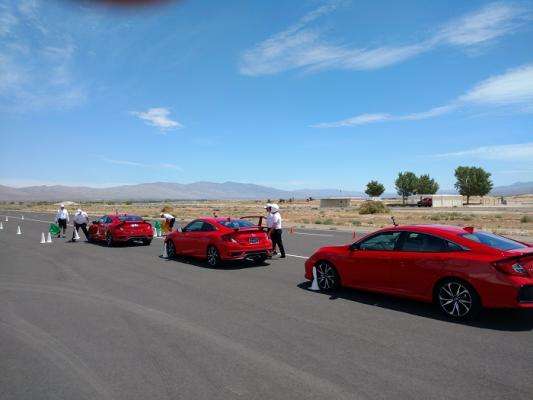 After driving 2017 Honda Civic Si, I'm not convinced I need a Type-R

We discovered a superior touring car detailed in Honda performance Civic Si trim. Horsepower and torque while formidable, is but a very small part of what 2017 Civic Si brings to the segment. Simply put,this is the best driving, high performance,Civic offered to date. I'm no longer convinced that I need or want a Type-R.
Advertisement

Arguably, the reinvented American Honda lineup is the most product diverse in the U.S.. With the European car inspired 10th generation Civic lineup blowing the doors off of the competition. Presenting a combination of surprisingly affordable sophistication and style, segment topping fuel efficiency, and 5-Star rated passive and active safety features -- most of them standard throughout the lineup, the “drivers” Civic, Si, comes to market well equipped for under $25,000, all in!

So, what makes 2017 Civic Si a great drive and ride experience?

First off, I must take a moment to congratulate Honda design and engineering. In person, the production 2017 Civic Si is visually superior to the final concept Civic Si design, as displayed in Los Angeles. Yes, Honda did listen to feedback from consumer groups and the automotive press before releasing this segment breaker. Civic Si presented in sedan or coupe, is well balanced of design, pleasing to the eye, and sensory rich as to touch and exhaust note. Honda engineering killed it on Civic Si.

Honda captures the historic past of Honda race inspired performance by keeping Civic Si relatively simple. It’s low-tech as modern Honda’s go, yet Apple Carplay and Google smartphone connectivity come standard for 2017. As does stability assist, adaptive damping, steering and more. The body line is clean, the styling, Si, as only Honda can present it.

The bonus found here for the hardcore Civic Si fan, is a much improved power adjusted driver’s seat, dual zone climate control, a well balanced instrument panel, a wider, fatter, closer to the ground chassis platform, and yes, the quickest 0 to 60 mph factory stock Civic Si in the maker’s history.

So, let’s get on with it: I’m a bit old school and hard nosed when it comes to interior ergonomics and ride quality. Frankly, the Civic Si of the past was a bit suspension stiff for my taste, the seat at times, painful -- not any more! Honda engineering brings Civic Si into the future with arguably the most comfortable (re engineered) cloth covered seats in the segment. Built on the same world platform as the Civic sedan Touring, Coupe and the manufactured in England 5-door hatchback, 2017 Civic Si comes to market with astoundingly good handling characteristics, a “best in class” much quieter cab than past Si generations, and a ride and feel generally associated with a much larger car. 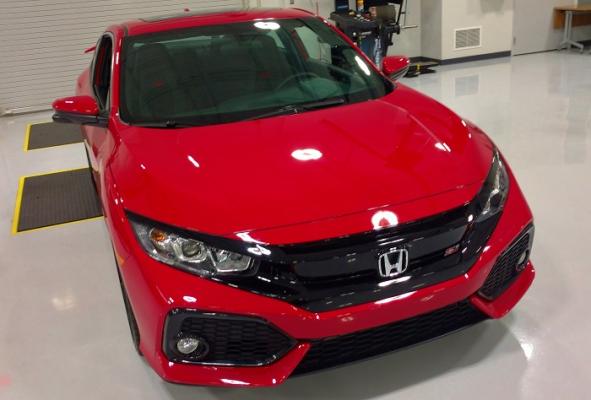 2017 Civic Si presents that “one with the car” thing

Our day at the Mojave Desert Honda Proving Center began on the track, where 2017 Civic Si held its line as if it were on rails. I did note a bit of over steer, but that may of been my personal learning curve as I dialed in Civic Si’s electric steering feel. For 2017, Civic Si comes equipped with 2 drive-mode choices, regular and sport. For the track and most of our 170 mile street drive, I found “sport” to be the best setting for my style of driving.

Pushing the drive-by wire accelerator pedal to the floor, I released the clutch. Surprisingly, there was little to no torque steer noted. While the guy in front of me intentionally broke traction at launch, I opted for an aggressive yet track steady takeoff -- the standard equipment limited slip differential truly keeps Civic Si very torque transfer positive, track sticky, and when taken off onto dirt or gravel road, traction happy.

Coming into turn 1: I dropped the hammer and downshifted Civic Si into 3rd gear 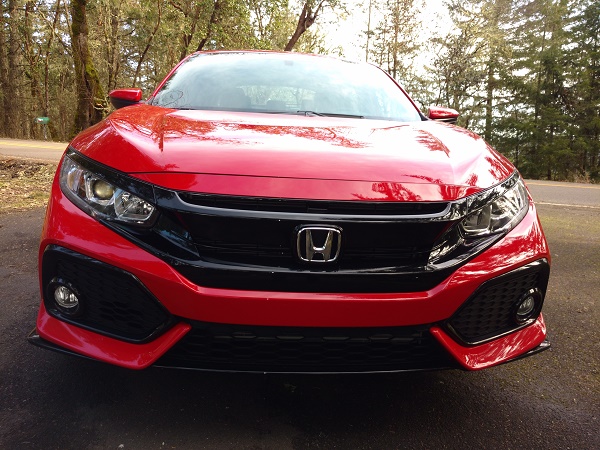 I was a bit blown away by the instant-on-demand torque. Frankly, pushing Honda’s 6-speed, turbocharged Civic Si wonder to unlawful speed limits that afternoon, chasing an uphill cloud or two, I never found the top of 6th gear. Looking down for a moment at the speedometer,, with the blink of an eye, and a grin as wide as an 8 lane freeway, I caught myself brushing the left side of 110 MPH -- 2017 Civic Si is geared very tall -- not so much as a bump from Honda's very affordable compact pocket racer. Well, as they say: “(don’t try this at home.)

Seriously, although I’m confident that there will be ample aftermarket accessories and performance upgrades coming down the pike for 2017 Civic Si, it’s a darn impressive sport-offering as is. For me, where this car truly shines is in the exceptional on-tap turbocharged torque, the sweetest close throw 6-speed manual transmission in the segment, and a drive and ride suspension comfort rivaling many midsize sedans and coupes costing $ thousands more. Mamma want’s more? Check out the Acura TLX A-Spec.

I’ll be the first to admit that I do appreciate a steering wheel mounted, paddle shifted, automatic, dual clutch or segmented CVT transmission. Yet, there’s something about a foot activated clutch, and hand shifted manual transmission, that brings one back to the basics of sport driving.

2017 Honda Civic Si just happens to feature a mechanically bulletproof, user friendly, 6-speed manual transmission. It’s a blast to drive, easy to operate, and quickly becomes second nature. There’s nothing else in 'man meets machine' like grabbing a gear, and holding it until the engine RPM reaches the revlimiter. That happens somewhere around 6800 RPM in 2017 Civic Si, just this side of trouble. After driving Civic Si, I’m not sure I need a Civic Type-R. 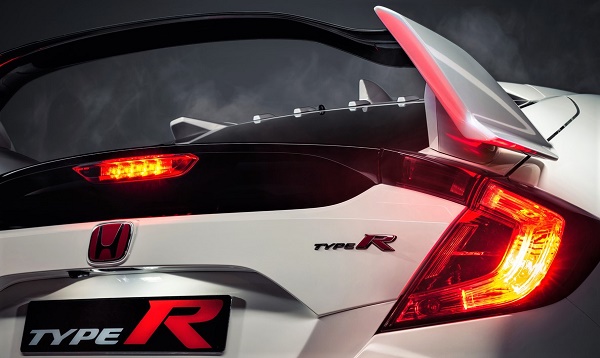 6th gear’s there, but you won’t often need it

Blowing over the desert passes at 75 MPH. I up-shifted Civic Si into 6th gear. Amazingly, although a tad dead, I discovered some remaining peddle. The cool thing here for this gear head was that Civic Si was running just a tad over 2700 RPM. Truthfully, while driving the Honda Proving Center road course, most of our work was done in 3rd and 4th gear -- that is Si’s sweet spot -- and although taching out around 4,500 RPM, Honda’s latest and greatest Civic Si remained reasonably quiet in the cabin, broken only by the sweet melodic tones of the Earth Dreams ™ 1.5 Liter turbocharged, direct injected VTEC 4-cylinder gasoline engine -- sweet!

Test drive recommended if you can find one

I recommend a 2017 Civic Si test drive to anyone considering a near premium compact sedan or coupe priced at under $30,000. In fact, the reinvented Civic Si may be Honda’s best (affordable) compact performance touring car.