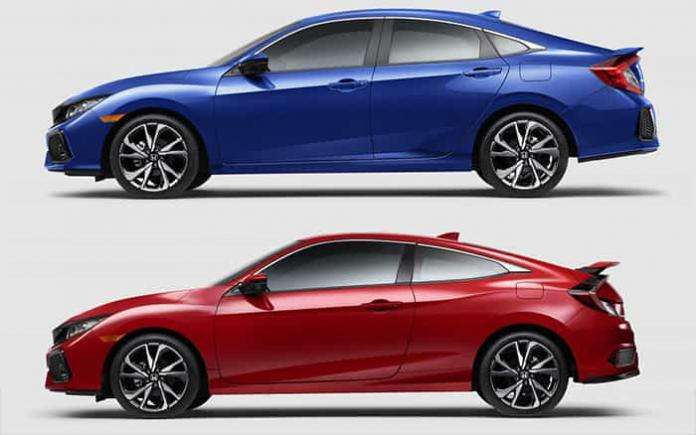 When I began shopping for a new 2017 Honda Civic Si, narrowing down my color choice was easy. I also wanted the all-season tires over the Si's sole factory option of Summer tires for my needs. Deciding whether I wanted the coupe or sedan wasn't as easy.
Advertisement

Why I Wanted the Coupe

I think the coupe version of the Honda Civic Si certainly has a sportier appearance. I like the full-width tail lights and the more prominent spoiler. The rear of the coupe also has a cleaner, simpler look in place of the the large, fake rear vents on the sedan that are borrowed from the hatchback.

See Also: Deciding Between a Honda Civic Si and a Type R

When I was a teenager, I thought of sedans the same way I thought of a dog with six legs. Those extra two legs — I mean doors — just seemed awkward and unnecessary. Over the years as market preferences changed and I became more practical, my negative sentiments toward them changed as well. While it seems like automotive blasphemy to squeeze an extra set of doors into a Corvette, the opposite could be said for removing a set of doors from a Subaru WRX.

As sporty and substantial as the Civic coupe's doors look and feel, that same length increases the chance of accidentally opening a door against a wall or worse — against another vehicle. The shorter doors of the sedan make it easier to enter and exit the vehicle in narrow spaces.

The sedan also features height-adjustable front seat belts whereas the coupe's front seat belts are fixed in position. If you plan on carrying much cargo in the trunk, the sedan wins here, too. This is especially important considering the Si's shallower spare tire well that cannot accommodate a spare tire without raising the floor of the trunk which consumes valuable space.

The Sedan Caters to Rear Passengers

Rear passengers in the sedan are treated to heater ducts located under the front seats for toasty toes in the Winter. These heater ducts are absent in the coupe. The sedan also has a fold-down center armrest with integrated cup holders for rear passengers that the coupe lacks. Once your friends manage to crawl into the coupe's rear seat without spilling their beverages, they'll need to hold on to them since there's no center armrest with cupholders.

On the safety front, the NHTSA also gives a nod to the sedan with its 5-star frontal crash rating compared to the coupe's 4-star rating. In terms of a technical value, the sedan offers twice the number of doors and all the components inside them for the same price as the coupe. A couple of other minor differences are that the sedan has slightly better weight distribution (60.3/39.7%) compared to the coupe (61.4/38.6%) and the coupe weighs 17 lbs. less. You can expect similar levels of performance from either body style.

Don't Miss: The Honda Civic Has Finally Grown Up

For me, the practical value of the sedan easily won the competition. If I had a wider garage and never carried any rear passengers, I might have ended up with a coupe instead.

Joe Schepis wrote on June 15, 2020 - 12:36pm Permalink
Thanks for the details. Height adjustable seat belts in the sedan but not the coupe. I sure was not aware of that or no heat ducts in the coupe and in Michigan winter heater is important. Thanks again. Joe
Neal wrote on June 15, 2021 - 7:18am Permalink
Having read your review, it leaves me wondering why you wanted the Si in the first place. The things that were important to are the things that IMO detract from the concept of the Si. Trunk Room? Door Size? It's the car from Fast & Furious. Vin Deisel needed trunk space for NOX bottles and a kicking thumper. Just sayin.