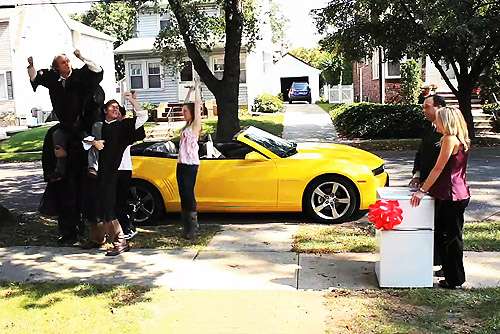 You could win $10,000 by sharing your favorite Chevrolet Route 66 video

Filmmakers from around the world have created video spots for the Chevrolet Route 66 contest in an effort to have theirs aired by GM during SuperBowl XLVI. Now fans have the chance to win $10,000 by sharing their favorite 30-second spot from the 35 finalists selected from over 197 entries and 32 different countries.
Advertisement

Chevrolet collaborated with the global creative community MOFILM to call for the entries. The best spot designated by the marketing executives at Chevrolet will be shown during the 46th installment of the championship competition on Feb. 5, 2012.

“With Chevrolet Route 66, we wanted to tap into the talents of creative people from every corner of the Earth to discover our next Super Bowl ad,” said Joel Ewanick, GM vice president and global chief marketing officer. “The submissions we received show that people from around the world share many of the same values and how Chevrolet plays a role in helping them along life’s road.”

Without intending to diminish what he just said, this is pretty sharp thinking for a corporation who had to fight off bankruptcy over the last couple years – this way they can spend their money on ad placement instead of ad production. Amazingly, the spots tend to be highly creative with excellent cinematography.

The fan contest begins today and runs through 6:59 p.m. EST on Jan. 25, 2012. Qualifying fans from Brazil, Canada, China, France, Germany, India, Mexico, the United Kingdom and United States can view, evaluate and share their pick as the best Chevrolet Route 66 film. Those who distribute the videos most often with the most creative reply to the question “if you could drive to any destination in your country, where would you go?” could win as much as $10,000.

Chevy worked with Microsoft Advertising to create a contest hub for the videos capable of localizing and sharing the films from all over the world.

The photo above right is from Happy Grad, submitted by Zachary Borst, a humorous 30 second ad taking on the age-old conundrum, “What to get the graduate?” The spot was submitted to Chevrolet as part of its Route 66 ad contest.

“Because Chevrolet is sold in many countries, ‘crowd-sourcing’ content globally is a great way to find creative advertising that resonates with consumers,” said Ewanick. “Using that same concept, we hope to have fans identify their favorite ads for us by voting with their ‘clicks’ and sharing with friends.”

Again a smart ploy as an ad exec has to predict a commercials impact with only his best hunch on what will truly resonate with their target market. Here they are mining empirical data from the very people they are trying to reach.

The contest site will identify registrants with unique user codes allowing the accumulation of points whenever they share their favorite video. The top sharers (read the most savvy social media users) will be tracked by the site’s leader board. To avoid the contest being won by a web robot, the contest site will require entrants to confirm with a valid email address.

Fans can enter the contest and view complete program details by visiting the contest website. Winners will be announced within two weeks after the conclusion of the contest.

Then everyone watching will see the winning 30-second spot during Super Bowl XLVI.

LG's New EV Battery Plant Is a Welcome News for Tesla
Tesla Giga Berlin's New Hurdle: It's Not Only the Gov't, but Now Tesla Itself
END_OF_DOCUMENT_TOKEN_TO_BE_REPLACED