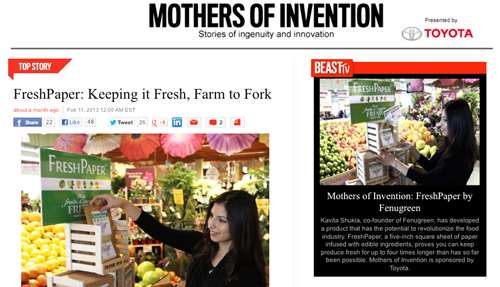 Toyota fuels innovation by paying tribute to Mothers of Invention

At the fourth annual Women in the World Summit, held April 4-5, Toyota came to the table with $150,000 to fuel the innovation, raw creativity and courage of the Mothers of Invention, three women who are addressing some of world’s most pressing issues with sheer ingenuity.
Advertisement

The event, founded by Newsweek and The Daily Beast, recognized Kativa M. Shukla, founder and CEO of Fenugreen; Caitria O’ Neill and Morgan O’ Neill, co-founders and chief executives of Recovers.org; and Sejal Hathi and Tara Roberts, co-founders of girltank.

Those three accomplished women each received a $50,000 grant from the Toyota Driving Solutions. In addition, each of the grant recipients was provided an additional $15K to pay forward – to empower other champions of change of their own choosing.

One such formidable and inspirational woman, present for the two-day summit, was Pakistani activist Khalida Brohi, founder and director of the Sughar Women Program, which seeks to end tribal violence to women in Pakistan. A video shown during the summit revealed Brohi boldly confronting chauvinistic village men brashly asserting Pakistani women who want an education should be shot.

Toyota was a presenting sponsor of the Women in the World Summit held at the David H. Koch Theater in New York’s Lincoln Center.

"It's an honor to return as a sponsor of the Women in the World Summit,” said Julie Hamp, chief communications officer for Toyota in North America, and summit co-presenter. “Toyota is proud to demonstrate its ongoing commitment to women by honoring the Mothers of Invention – courageous and innovative leaders who are making a difference in their communities and the world.”

About the Mothers of Invention
Kavita M. Shukla – Founder/CEO Fenugreen
Kavita Shukla is the inventor and founder of Fenugreen, an enterprise addressing food spoilage with a simple solution called FreshPaper. Shukla developed the product in high school, discovering the active ingredients in a home remedy taught by her grandmother in India. The FreshPaper keeps produce fresh up to four times longer than previously possible and now used by farmers and consumers across the globe. Not satisfied with that alone, Fenugreen is establishing initiatives to benefit local food banks in the U.S. and small-scale farmers in the third world.

Tara Roberts & Sejal Hathis – Founders of girltank.org
Girltank is a web-based crowd-funding platform, giving girls and women a chance to share social initiatives with the world, connecting donors and investors via an easy way to find and support such projects. Girltank provides the infrastructure for girls starting promising projects, helping to sustain the work and gain visibility. So far, girltank has empowered approximately 1,500 female agents of change from 104 countries.