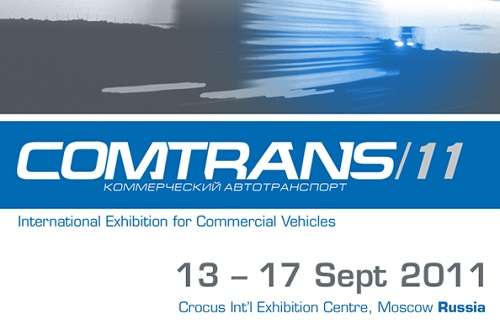 While the attention of the car industry is on the 2011 Frankfurt Motor Show a special auto show, called Comtrans, kicked off in Russian capital Moscow yesterday displaying commercial vehicles. Major truck and commercial vehicle makers of the worlds are at COMTRANS displaying their entire lines and here is why it makes perfect sense.
Advertisement

The former Soviet Union has come a long ways from the Wild West/Gangland era that characterized the post-collapse years of the Soviet Union, but has yet to emerge with a sufficiently dynamic economy to empower the masses and put an automobile in every Russian Garazh (garage in the Western Asian tongue).

Still, building the economy will take goods, services and commercial trucks and vans to get them to market, so this week’s Comtrans 2011 is about just that. It is actually the 11th annual gathering in the event’s history.

Comtrans 2011 will be held in Moscow’s most up to date trade fair center, the Crocus Exhibition Center. Comtrans 2011 is now the largest European Commercial Vehicle Exhibition held in 2011 and is on the calendar of official and competetively important motor shows listed by the International Organization of Motor Vehicle Manufacturers (OICA).

Since its initial gathering in 2000, COMTRANS has shown annual growth and emerged as the most important Russian trade fair for commercial vehicles, accessories and related industries.

Moscow’s COMTRANS 2011 is unique as a central place to meet global players from manufacturers in the Western Hemisphere, Europe and Asia, as well as getting a glimpse into the Russian and Eastern Europe market demand, which is likely to be the next emerging market, right after China, India and Brazil.

Volvo's exhibit at Comtrans 2011 will include seven of their large commercial trucks, with the expected highlight to be their most powerful truck in the line – the Volvo that features the brand’s largest engine. The Volvo FH16 produces a staggering 750 hp with torque of slightly over 2,618 ft.-lbs. It is intended for the transport of heavy cargo over long distances at a high average speed, like those common to Russian and Easter European highways.

Volvo is also presenting their tractor trailers, notably the Volvo FM Orca for regional transportation and the main tractor Volvo FH Ocean, which has been named the round the world dedicated to start the regatta Volvo Ocean Race 2011-2012.

Volvo Trucks is also highlighting their leadership in the development of alternative fuels engines by revealing the methane-diesel Volvo FM 6x2. In addition to trucks, Volvo is displaying the D16 motor, I-Shift automatic transmission and a unique tipping cab Volvo FH, clearly demonstrating the need for seat-three-point safety belts, as well as some of their world-renowned safety technology.