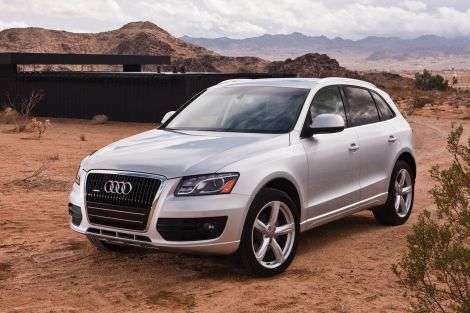 Seven overlooked vehicles you must consider in 2011

The National Auto Dealers Association (NADA) has released a list of vehicles not likely to be first in the buyers mind, but deserving of a thorough look due to a combination of quality engineering, overall design, prized features, great performance and excellent fuel efficiency. In short, NADA feels these vehicles show heightened value comparing the MSRP to a checklist of desired traits and abilities.
Advertisement

"Sporty luxury combined with fuel efficiency and top notch safety ratings all for a reasonable starting price of $35,200,” said Troy Snyder, NADA director of product development, “there's no reason this vehicle should not be at the top of consumers' minds."

Having recently driven the Audi Q5, we would have to agree with his assessment. (Read more)

The 2012 Fiat 500 is the company's first U.S. product offering in 27 years and and takes second place on the NADAguides Must Consider List. Considering its Euro styling, numerous options and a highly respectable economy rating of 30 mpg city and 38 mpg highway, the Fiat should not be overlooked. What makes the Fiat 500 truly unique is more than 500,000 possible custom configurations to choose from, allowing a buyer to make the car over to their own interpretation. Starting at only $15,500 and including a 5-year, 100,000 mile drivetrain warranty, the 2012 Fiat 500 is well worth consideration.

The 2011 Ford Taurus Limited delivers a comfortable ride and cutting edge technology, such as the Ford SYNC Voice-activated communications and entertainment system. This attractive sedan received a top crash test rating from the IIHS. With an estimated 18 mpg in town and 27 mpg on the road, The 2011 Ford Taurus Limited has a base price of $31,955.

“It not only impresses the eye, but its safety features are top notch ranked,” Snyder said. “It has earned its place in the spotlight."

The 2011 Hyundai Elantra Touring adds a versatile wagon to the competition with a sensible list price. This model combines fuel efficiency of 23/31 mpg with noteworthy features such as a 172-watt state-of-the-art sound system with remote keyless entry and is the first of its kind to offer Electronic Stability Control in addition to a Traction Control System. The 2011 Hyundai Elantra Touring offers a lot for a base price of $15,995.

2011 Kia Soul was recently added to the organization’s Most Economical and Practical List. The boxy car with the popular mousy commercial gets up to 24/30 mpg and starts at just $13,300. It makes this list for its practicality and the variety of features and options available to customize interior and exterior aspects of the vehicle. Optional features include sport-tuned suspension, fog lights, auto-off headlights, heated side mirrors, satellite radio, USB, articulated steering wheel, Bluetooth and more. With an advanced airbag system, the 2011 Kia Soul was also a 2011 Top Safety Pick by IIHS.

The 2011 Toyota 4Runner Trail is a highly capable sport utility vehicle at home on and off the road. Loaded with features, the 4Runner offers a terrain selector and Crawl mode. It comes standard with an eight speaker XM radio and iPod connectivity, plus Bluetooth. Toyota's Star Safety System™ earned the 2011 Toyota 4Runner a perfect five on government crash tests and has been designated Good by IIHS. This model gets a 17/23 mileage rating and starts at $35,955.

"The Toyota 4Runner Trail is built for and can handle even the toughest of driving conditions,” Snyder added. “Fully equipped with everything you need to take the adventure off-road, this SUV does not disappoint at all and successfully fulfills its purpose on and off the road."

The 2011 Volkswagen Golf is a versatile hatchback with refined driving dynamics that gets 22 mpg city and 30 mpg highway, along with standard features such as a 2.5L, 170-hp, in-line 5-cylinder engine, an eight-speaker sound system compatible with MP3/MMA and auxiliary inputs. Volkswagen's Intelligent Crash Response System (ICRS) and advanced airbags earned it a Good rating in frontal offset and side impact from the IIHS this year. The 2011 Volkswagen Golf starts at $17,995.

As the official record-keepers and analyzers for the auto industry, what NADA says has merit. If your thinking of buying this year and what you have in mind is similar to one on NADA’s Must Consider List, it’s probably worth your time to compare that vehicle carefully with what you were planning to buy.