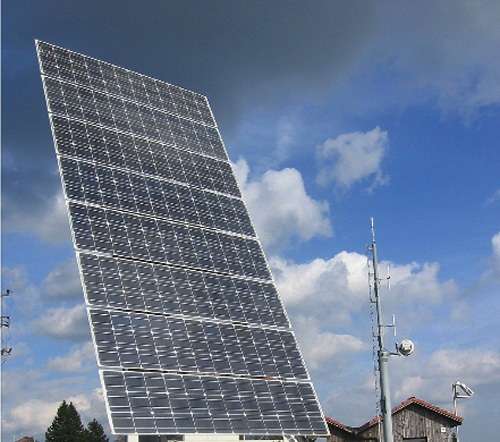 The recurring myths and amazing potential of solar energy

Despite the bright promise solar energy presents to power our homes and automobiles, myths are frequently promoted sullying the green cachet of the industry by media concerned with something besides truth, justice and the American way.
Advertisement

Research into some of these myths by Media Matters reveals, despite the efforts of conservative media to denigrate solar energy by denying sustainability and ignoring success, the booming industry has the potential to become a major national power source especially given the progressive policies it needs to flourish.

Is solar energy dirty?
There are certainly those who want to you to believe it is. Take for example, Drew Johnson, writing on behalf of Taxpayer Protection Alliance erroneously stated in a Washington Examiner op-ed, "It turns out that it takes a lot of power (and a lot of carbon) to build solar panels and wind turbines."

Then the Wall Street Journal, famed for buying into the fruitless WMD search that launched the Iraqi war, now wants you to believe the benefits of solar power are negated by the post holes needed to mount the collectors, flatly stating it, "really doesn't reduce greenhouse gas emissions." This, we are told, will negate years of clean power because the holes dug in the desert will disturb caliche deposits that release carbon dioxide.

Meanwhile, Kenneth Green, blogging on the American Enterprise Institute site, suggested, "Solar cells do not offset greenhouse gases." He cites the dubious proposal that the production of solar cells create fumes that would make carbon dioxide run away whining.

This in part results from the lifespan of the installations – whatever is stirred up by the construction of a solar generator, it will produce clean power for the next 30 years, replacing power currently produced by coal and other fossil fuels and thus the CO2 those processes would release.

According to the National Renewable Energy Laboratory (NREL), between 87 and 97 percent of photovoltaic solar output will be emissions free, compensating far above and beyond any emissions caused by construction.

Operated under the auspices of the Department of Energy, NREL further stated a solar PV pays back the energy required to build it within about two years." For the next "28 remaining years of assumed operation," a system that "meets half of an average household's electrical use" would avoid emitting carbon dioxide emissions equivalent that of two cars for each of those 28 years.

According to the EPA, a typical passenger vehicle produces 19.57 pounds of C02 for every gallon of gas. If the car gets 25-mpg across 10,000 miles annually, the photovoltaic collector would prevent the addition of nearly eight tons of CO2 every year. The totals would be over 10 percent higher with a diesel vehicle.

It is not easy to conceive of a ton of a colorless gas. It must be a one foot column soaring a mile overhead or something like that. Nearly 10 million cars were sold globally last year and in 2013 that milestone could be passed.

Solar gains far outweigh losses
The Wall Street Journal and others used a report by the University of California-Riverside, stating a solar plant could cause the loss of approximately 6,000 metric tons of CO2 annually by disturbing desert caliche deposits, omitting the data that the solar generator built with such a surface disturbance would prevent the emissions of roughly 560,000 metric tons of CO2 each year.

A professional gambler would tell you any risk of a dollar that’s sure to pay back $90 is a good bet.

The report also showed how a temperature increase of a single degree could greatly impact endangered species, as the recent habitat changes of polar bears and killer whales readily demonstrate, though ambient temperature increases in their habitats are probably well over one degree.

Solar energy imperative to a new paradigm
If the international agreement endorsed at the 2010 United Nations Climate Change Conference in Cancun, Mexico, the efforts needed to comply were defined by The International Energy Agency. To insure global warming does not exceed 3.6°F from the pre-industrial level, solar energy will have to produce more than 10 percent of the world’s electricity by 2050. Further, solar and wind energy are the most expandable of all renewable forms of energy, lacking the intrinsic limits likely to be encountered with other sources.

10,000 square miles of desert
NREL released a fact sheet in 2003 asserting that the electricity needed to power the entire nation could be produced by a square of Nevadan desert 100 miles per side. In addition, most of that area could come from abandoned industrial sites.

The BLM and the EPA have programs to identify disturbed and abandoned lands suitable for such development, partially funded by the 2009 stimulus package. Those concerned with the impacts of energy development on species and the ecosystems in general prefer prioritizing these areas for development.

Solar uses less land than coal
A 2009 study found solar photovoltaic ground installations in areas with plenty of sunlight generally use less land than surface mining of coal, without even considering the consequences of coal-fired energy production. Nor did the study note the effects of "contamination and disruptions of the ecosystems of adjacent lands, and land disruptions by fuel-cycle-related accidents."

The study was published in Renewable and Sustainable Energy Reviews by Dr. Vasilis Fthenakis and Dr. Hyung Chul Kim, also discovered "estimates vary with regional and technological conditions, the photovoltaic cycle requires the least amount of land among renewable-energy options."

Solar rooftops
NREL published a fact sheet in 2004 that concluded the US need only apply solar photovoltaics to 7 percent of cities and residences "on roofs, on parking lots, along highway walls, on the sides of buildings, and in other dual-use scenarios," to supply all of our energy needs. Another report in 2008 by the agency stated, "The land-use requirements for wide-scale deployment of PV are modest when considering both the large area of rooftop availability and when compared to other uses of land in the United States."

Multiple uses
Land converted to solar of wind power generation frequently can be also used to produce food in sun or shade, as well as grazing and other uses.

Other solar myths that can’t stand the light of day (in italics)
Solar power is too intermittent – Have you been to a desert lately? Would you call the sun intermittent? Besides Germany is the largest producer of solar energy in the world and we have far more clear skies and sunny days than they do in the Bavarian Alps.

In fact, the potential of solar power in the American Southwest is greater than anywhere in the world.

If it’s not sunny here, it’s windy. If it’s neither here (go figure), it’s sunny or windy somewhere nearby. The reality of a smart grid negates the need for storage. The IEA study found "the variability of PV, which matches demand peaks better than wind power and is relatively predictable, is unlikely to raise substantive issues for managing grids." Meanwhile, the use of back-up energy in managing this variance does not negate the climatic benefits of solar energy.

Frankly, the weather is more predictable than many things and by planning around weather forecasts, continuing to improve storage capability in addition to modifying demand with smart meters and other efforts, renewable energy can play an ever larger role in the future while maintaining a reliable electric supply, according to Professor Jenny Nelson and Dr. Robert Gross of the Imperial College of London.

The $4.5 billion President Obama invested in building a smart grid may not have gotten the job completely done, but it provided a giant step towards that end. When complete, the system will allow regional sharing of the electrical supply to more efficiently incorporate renewable energy sources into the grid.

Solar Power is too expensive – In reality, as solar panels have gained in efficiency, the cost of peak output in wattage has dropped from five to six dollars in 1989 to one to two dollars today.

Still not convinced?
A study by Bloomberg New Energy Finance shows manufacturers reduced the expense to power ratio of solar energy by 50 percent from 2008 to 2009, thanks to cost reductions of "scale and advances in wafer, cell and module manufacturing processes, as well as to improved performance resulting from better cell efficiencies and lower electrical conversion losses."

Bloomberg continued to predict, "Technological advancements, process improvements, and changes in the structure of the industry suggest that further price reductions are likely to occur in coming years."

Furthermore, Computer scientist Ramez Naam, looking at the continuing drop in solar energy prices from NREL data, believes projecting this trend, solar energy will be as cheap as our current electricity by 2020, while everything else gets more expensive.

The solar industry is failing – Not on your life. Last September, the Wall Street Journal (whose left hand doesn't seem to know what the right hand is doing) reported, "The U.S. is on pace to install as much solar power this year as it did in this century's entire first decade: at least 2,500 megawatts, the equivalent of more than two nuclear-power plants."

A report by the Brookings Institution last July stated from 2003 to 2010, job growth in the solar thermal industry grew at 18.4 percent yearly while photovoltaic industry jobs expanded by 10.7 percent annually, while the rest of the country eked by with a 4.2 percent national economic growth rate.

The solar industry is going through a maturation process and naturally some firms couldn’t finish the race. Just as hundreds of early automakers went by the way side or were engulfed by larger corporations as the industry grew.

In Conclusion
Chances are there is no electric car in your garage and you probably don’t have bank of photovoltaic cells or modules on your roof. Nobody is planning to force you into either of these things, but don’t let anyone try to tell you solar and wind power aren’t a big part of the future.

The greening of America involves a great many of our choices, including electric cars and solar garages. What’s wrong with a lifestyle choice that pays half the power bill along with most transportation costs? It sounds just great to us.

And the sun just keeps on shining…