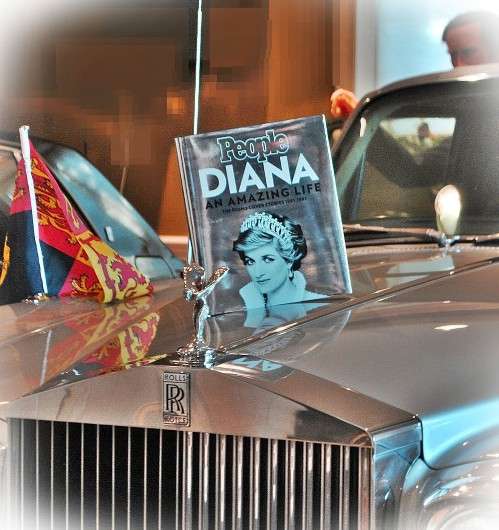 When Diana, Princess of Wales, and Prince Charles first came to the US in November 1985, they traveled about in the United Kingdom's official embassy car – a heavily armored Silver Wraith II that goes on the auction block Nov. 9.
Advertisement

This Rolls Royce, with extensive documentation of its use by the Royal Family and other UK dignitaries will be put up for bid by Volo Auto Museum next month in a no-reserve auction.

The car is completely original except for a shiny new paint, and the initial modifications that made it a secure conveyance for dignitaries of the highest order. Gleaming silver with a red leather interior, the windshield alone weighs 600 pounds and is several inches-thick. The rear window is of similar heft, while the side windows are bulletproof as well as sealed to prevent any toxic gas exposure.

The exterior trim is fitted with intercoms so guards or others alongside the vehicle can communicate with the occupants. They are so well insulated behind immobile windows it would be necessary to open the doors to speak with them otherwise.

Over $200,000 was spent armoring the vehicle over a three year period to protect visiting heads of state, of which Prince Charles and Princess Diana were certainly the most widely publicized.

However, the most remarkable asset may be the diplomatic logbook, that reveal how it was used during the princess' introduction to the US. Furthermore, videotape footage has been discovered showing the quintessential princess and Prince Charles in the car approaching the White House, to meet then-President Ronald Reagan and First Lady Nancy Reagan.

"One of Jay's customers called and told him about the car," Volo Auto Museum Director Brian Grams said, in reference to his brother, Jay. "An associate of the Berman Museum of History, which valued the car at $2 million, had purchased it from Berman."

"We just thought it was an armor-plated Rolls Royce that had been embassy-owned," he continued. "But after digging through the documents and doing some research, we figured out what the car really was."

Marking the 27th anniversary of Princess Diana's first American visit, the museum is offering this exquisite automobile with its considerable historical relevance to the highest bidder.

In honor of Princess Diana, a portion of the sale of the car will be donated to CHILDREN with CANCER UK, Britain's leading children's charity dedicated to the elimination of childhood cancer, which Princess Di founded in 1988.

Other celebrity related vehicles to be featured in the eBay auction include Jon Bon Jovi's personal BMW and the last car owned by Groucho Marx and others. Full details are available by calling 815-385-3644.